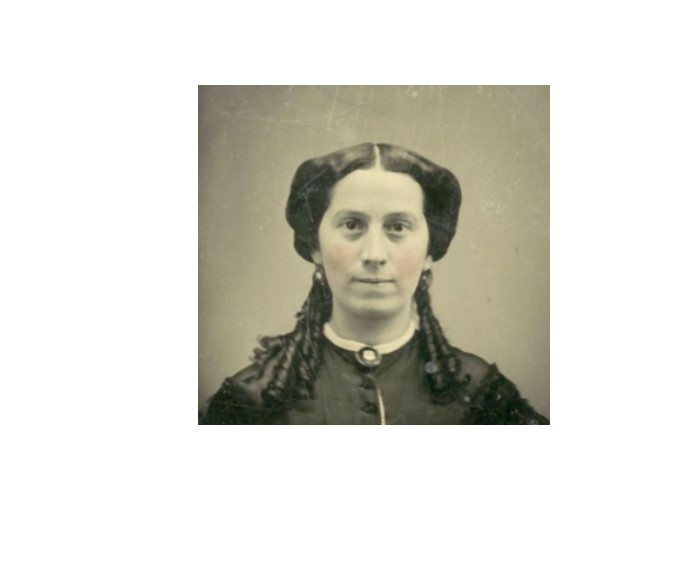 Charlotte Ives Cobb was born on August 3, 1836 to Quaker parents, Henry and Augusta Cobb, in Boston, Massachusetts. Her life took a dramatic turn when her mother deserted Charlotte's father and five of her children, taking seven year old Charlotte to Nauvoo, Illinois, a town chartered by the Mormons. Augusta converted to Mormonism and became the fifth plural wife of Brigham Young. In 1848 Charlotte and her mother moved to Salt Lake City where the Mormons settled after leaving Illinois. Charlotte was raised as a step daughter of Brigham Young and in her teenage years, she taught in his school.

In April 1869 Charlotte became the fourth plural wife of William Godbe, a wealthy manufacturer. He was a principal founder of the Godbeites, a protest movement against Brigham Young's and the Mormon Church's influence in economic and political affairs. The Godbeites also embraced woman suffrage and equality of women. William was excommunicated from the church in the fall of 1869; however, Charlotte remained a member of the Mormon church. In 1873, William Godbe disavowed polygamy and remained with his first wife. Charlotte and William officially divorced in 1879. She married John Kirby, a mine owner, in 1884.

For thirty years, Charlotte advocated for women's rights. During the 1860's, she traveled to the east coast with her mother and met Lucy Stone, an acquaintance of her mother, and other suffragists. Her mother inspired her to advocate for woman suffrage. She travelled to the east coast with William soon after their marriage and they contacted and met with national suffrage leaders.

Charlotte was in the vanguard for woman suffrage in Utah. In a letter to the President of the Mormon Church she recounted her effective efforts for suffrage: "through a personal influence used among my relatives and friends...also letters I wrote to leading papers, & words I spoke at conventions of Woman Suffrage Meetings, assisted...in helping the bill to pass which gave to the women of Utah the right to vote." The legislation granting woman suffrage in the Territory of Utah passed in February 1870.

She continued to play an influential role in Utah suffrage. In 1887 Congress passed the Edmunds-Tucker Act opposing polygamy in the Territory of Utah. The law abolished plural marriages and woman suffrage as well. Women reacted by establishing the Utah Woman Suffrage Association, a chapter of the National Woman Suffrage Association (NWSA.) Charlotte helped organize the Utah association and held the position of corresponding secretary. She wrote letters to newspapers, spoke at suffrage meetings, and maintained contacts with national suffragists.

In 1894 Church president John Taylor appointed Charlotte to present a petition to Congress for Utah women's suffrage. Statehood was granted to Utah in 1896, six years after the Mormon Church banned polygamy. The constitution of the new state included a Utah woman's right to vote.

Despite Charlotte's being at the forefront for woman suffrage in Utah, her name was often absent from lists of Utah suffragists. A friction had developed between her and other Mormon suffragists, especially Emmeline Wells. The clash dated to the 1870's when Emmeline criticized Charlotte for not advocating for polygamy, a tenet of the church; therefore, Emmeline declared in the Woman's Exponent, a pro-Mormon journal she edited, that Charlotte could not represent Utah women. Although Charlotte described her marriage as a "painful domestic experience in polygamy," she never spoke out against polygamy. Charlotte's belief in spiritualism and her connection to the Godbeites were most likely other contributing factors to her not being embraced by many Mormon suffragists.

"The contest between Charlotte and Emmeline would continue through their long careers. Charlotte was a feminist, while Emmeline stood as the symbol of the polygamous wife," according to Beverly Beeton in her article,"Woman Suffrage in Territorial Utah." Charlotte persevered in her efforts for suffrage because she felt "it was morally right for women to participate in their government. Emmeline worked for woman suffrage as a means to promote Mormon women, their Relief Society, and the church's goals such as statehood for Utah."

"Politics and religion won't mix," Charlotte wrote in a letter to Church leader Woodruff in 1889. Hence, she spoke to Methodists, Mormons, and Baptists in their respective houses of worship, urging women regardless of region or religion to "strike hands in fellowship..." She declared in speeches "the era of women has begun and only in unity is our strength."

Charlotte actively participated on the national suffrage level as well. In 1871, she spoke at suffrage conventions in Providence, Rhode Island and Boston, Massachusetts. Invited by the American Woman Suffrage Association (AWSA), an organization founded by suffragist Lucy Stone, Charlotte spoke before two thousand in Boston. She proved an effective speaker and her address to the convention was widely reported in Boston newspapers. The Boston Journal "paid a high tribute to the gifts of the young lecturer, and the impression produced by her effort." She became the first woman from Utah and the first woman with voting rights to speak to national suffragists.

Charlotte also engaged with the NWSA, an organization founded by Elizabeth Cady Stanton and Susan B. Anthony. In an article in The Revolution, a weekly newspaper started by Stanton and Anthony, she advocated for women's equality: "The root of evil... lies in the inequality of the sexes." And further: "Give her equal rights." At a National Woman Suffrage Convention in May, 1871 she was appointed the first Utah delegate to a NWSA convention in Washington, DC. She was chosen by the convention to speak on suffrage for all women to a House Committee; she spoke from the viewpoint of one already practicing the right. She also served on the NWSA Educational Committee, the first Utah woman on a national suffrage committee.

The Godbe family invited and hosted Elizabeth Cady Stanton and Susan B. Anthony in Salt Lake City in the summer of 1871. After their visit, Charlotte's relationship with the NWSA leaders, as well as with AWSA leaders, and the national suffrage movement continued for twenty more years. She attended suffrage conventions, spoke at suffrage meetings, traveled extensively, mainly to the East, hosted suffragists in Salt Lake City, and wrote pro-suffrage letters to newspapers.

Charlotte spent thirty years in the fight for woman suffrage. She attributed her long dedication to her mother. "It was dear mother's last wish that I continue the work she had commenced...my heart is committed to this work of Woman Suffrage..." she wrote. Indeed, Charlotte fulfilled her mother's wish.

On August 21, 2020, a monument titled "A Path Forward" was dedicated on the grounds of Council Hall in Salt Lake City, one of the places where American women cast their first ballots. The monument overlooks the Utah State Capitol and commemorates the 100th anniversary of the 19th amendment to the Constitution and the 150th anniversary of suffrage for women in Utah. The monument consists of a table, two chairs, four doorways and a bronze screen of quotations from suffrage leaders.

Located on the bronze screen in bold letters is the following:

NOTE: the photograph of Charlotte Ives Cobb Godbe Kirby was found at: https://history.churchofjesuschrist.org/training/museum/disenfranchisement