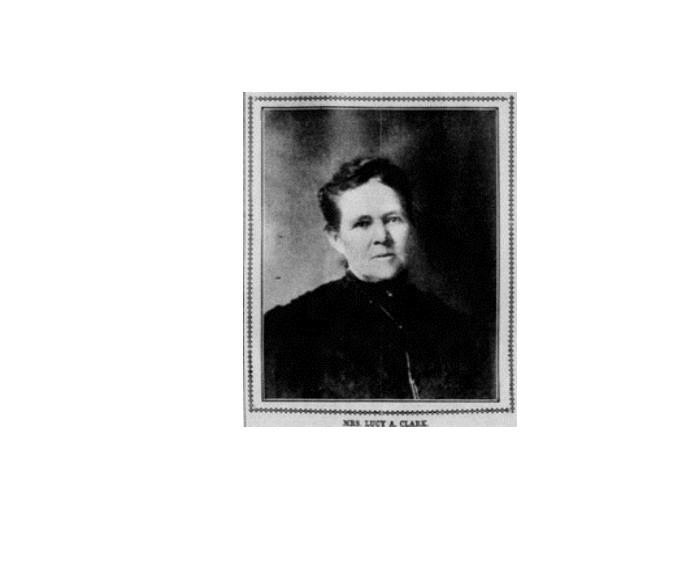 Lucy Augusta Rice was born on March 5, 1850 in Farmington, Utah to William and Lucy Rice (nee Geer), Mormon pioneers of 1847. Her father was a farmer; her mother ran a private school and was an expert seamstress. Eight year old Lucy assisted at her mother's school and as a sixteen year old she taught at the village school. A year later, she married Timothy Clark, a student in her mother's school. Timothy's brother thought Timothy had married the "smartest woman in the town." They had eleven children; three died in infancy. Lucy's husband tried various endeavors, including selling salt and cod, raising bees and selling the honey, and farming, but he struggled financially to support the family. A strong pioneer woman Lucy raised and wove flax into cloth, sheared sheep and used the wool to make clothing, and made soap and candles from animal fat. In the early 1890's, she traveled to western states as a salesman of a machine used to draft patterns for clothes. Her husband stayed at home with the children. The Clarks divorced in 1904 due to differences, including that Lucy was an ardent Republican, Timothy a Democrat. Also, Lucy possessed leadership and financial abilities.

Clark chaired conventions for the Davis County suffrage association, and held weekly meetings with men for discussions with WSA members to learn the legislative process. She felt strongly for the need of women to educate themselves about politics and broaden their ideas to prepare to vote intelligently. An effective and forceful speaker she gave suffrage speeches to various groups throughout the county and to other suffrage associations. On the state level, starting in 1892, Clark attended Utah Territorial WSA conventions as a delegate, giving reports on the Davis County WSA and opening addresses at times as well. Clark served for a period of time as vice president in the state association. In 1895, a Constitutional Convention met in Salt Lake City to draw up a state constitution for Utah statehood. She was a signer of the pro-suffrage document drawn up by the Utah Territorial WSA and presented to the convention urging woman suffrage be included in the constitution. It was. When Utah became a state in 1896, women gained the right to vote. She participated in National American Woman Suffrage Association (NAWSA) conventions as a delegate in 1900 and 1908. The NAWSA chose Clark to speak before a Senate committee on suffrage on behalf of the women of the nation in 1900.

Her involvement in Utah Republican party began in the 1890's. Clark attended a Republican county convention in 1895, the first time women were able to participate in the convention. She gave a speech, was appointed to the committee on credentials and was chosen a delegate to the senatorial convention. At the convention in 1896, delegates nominated Clark as a candidate for the State Senate (she later lost the election). As a Republican party member, she organized study clubs throughout Davis County to explore the principles of the two political parties and civil government. Prominent in political affairs, she spoke at county conventions, participated as a delegate to county and state conventions and served as a political manager for a woman canvassing the state in support of President McKinley in 1900. Clark actively engaged in Republican party activities until her death in 1928.

Her advocacy for suffrage was evidenced as a member of the Utah Woman's Press Club (UWPC). A charter member of the UWPC in 1891, the group formed to benefit women in journalistic or newspaper work. Clark wrote and edited the Farmington Flash Light followed by writing for TheBox Elder News and the Deseret News. She was on the committee of three to write by-laws for the new organization and later served as UWPC president. Woman suffrage and the role of women in politics was of great importance to the organization. The UWPC held meetings for the consideration of woman's suffrage, advocated for female representation in political matters, and urged members to write suffrage articles to newspapers and circulate suffrage petitions.

Clark was a member of the Farmington Relief Society, a Mormon women's charitable organization. The society advocated suffrage and equal rights, believing that a woman's right to vote aligned with the Society's goal to improve the standard of living for women. Society delegates spoke on suffrage at conventions and councils.

In addition to her labors on behalf of suffrage and Republican party politics, Clark was "prominent in every movement intended to advance the interests of the people" and made "her influence felt among all with whom she ... associated," according to an article in the Deseret News. A leader in civic and religious activities, Clark's myriad activities included postmistress of Farmington, Garland town council member, and a district superintendent of religious classes. She remained active in civic and religious affairs until the end of her life.

Lucy A. Clark died on November 13, 1928 in Salt Lake City. She was buried in Farmington City Cemetery in Utah. 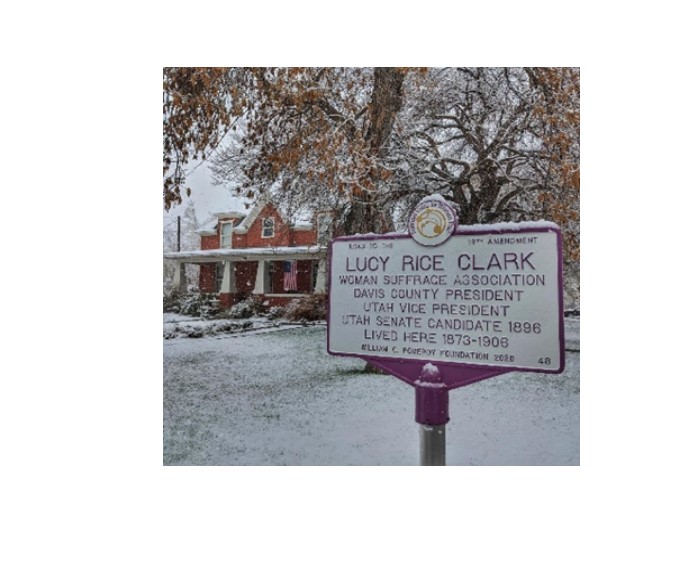 In November 2020, a historical marker, the first of nine to be placed throughout the state honoring suffrage women, was erected at the former Farmington home of Lucy Rice Clark. It salutes her efforts for the right of women to vote in Utah.