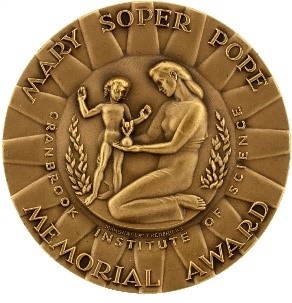 Mary "Theresa" Soper was born on September 17th, 1872 in Rome, New York to Arthur and Hetty Soper. She married Gustavus D. Pope on October 12th, 1904 and lived with him at Detroit Ward 17, Wayne, Michigan. They had three children together, John Alexander Pope, Elizabeth Lee Pope, and Gustavus Debrille Pope Jr. She died on August 9, 1940, and was buried in Birmingham, Michigan, and was later joined by her husband after his death in 1952.

Very little is known about Mary Soper Pope's life. Along with her mother, Hetty Mann "Wardwell" Soper, she was a member of the Michigan chapter of the Daughters of the American Revolution. Alongside her husband and children, she was a member of Detroit Musuem of Art, and she and her husband frequently donated to the University of Michigan. She and her husband also contributed to the suffrage movement in Detroit and assisted in Mrs. Emerson Davis's petition campaign in 1918. Davis was the chairman and custodian who directed a major petition campaign in Michigan in 1918 that received over 202,000 signatures. This was the largest woman suffrage petition ever recorded in the state of Michigan and contributed to the suffrage victory at the polls in November 1918.

Following her death, her husband established the Mary Soper Pope Memorial Award in honor of her "thoughtful nature, her quiet yet inquiring spirit, and her constant pleasure in the beauty of growing things." The award recognized "noteworthy and distinguished accomplishments in the field of plant sciences." The award was established in 1946 and recognized 17 recipients until 1970. Additionally, at least two pieces of art by artist Mary Chase Perry Stanton were donated to the Detroit Musuem of Art in her honor.

Annual Reports of the Secretary, Treasurer, and Director of the Detroit School of Design for the Year Ending June 30th, 1917. Detroit, MI: West Pringing Co., 1912.

Proceedings of the Board of Regents. The University of Michigan, 1932.