"I was born to Capt. William Lucas and Nannie J. Reese Lucas. I married Robert D. Eichelberger on September 15, 1885 and we lived together until he died on April 30, 1943.

We came to Reno in 1900 to stay and Mr. Eichelberger was an employee of the Wells Fargo & Co. I was connected with the winning of suffrage for women from the inception of "Votes for Women. During the time we lived in Reno, I became an Eastern Star and in 1913 was matron of Adah chapter No. 4. OES.

I formerly was press chairman for the Twentieth Century club, and was organizer of the Women's Citizens Club, which was political power in its time, along with the WCTU of which I was secretary-treasurer for many years." (Written by Bessie for her obituary.)

Bessie R. Lucas Eichelberger was a passionate supporter of women's suffrage in the early 20th century who worked tirelessly in many organizations to achieve that end as well as speaking out on many other issues.

She was born to Captain William Lucas and Nannie J. Reese Lucas in Pleasant Hill, Missouri, on September 4, 1863. She was the granddaughter of General Samuel D. Lucas, recorder of deeds in Kansas City in the early days of the country's independence. At the age of 22, she married Robert Eichelberger and moved with him to Reno in 1900, when he got a job with Wells Fargo & Co.

Before her suffrage activities, she was busy as the matron of Adah Chapter No. 104, Order of Eastern Star. But equal voting rights for women tugged at her, starting about 1910. She was connected with the winning of suffrage for women from the inception of "Votes for Women" as the secretary-treasurer of the Nevada Equal Franchise through the years it took to win.

A member of several organizations, she was voted auditor of the Nevada Women's Civic League in February 1915. Prominent Nevada suffragist Anne Henrietta Martin was voted president at the same time.

In early November 1919, the WCTU state convention was concluded, and Eichelberger, as secretary, read the convention summary to the local group, which passed a resolution asking Nevada Governor Emmet Boyle to call a special session of the legislature immediately to pass the ratification of the federal suffrage amendment. In January 1920, she was selected as a delegate to the regional WCTU convention in San Francisco, which commenced on February 18, 1920.

Before she went there, details of the meetings between the governor and the Nevada Federation of Women's Clubs' Conservation Committee, of which she was chairman, were revealed in a Reno Evening Gazette article. Initial plans for the Nevada Legislature's special session to take up the suffrage amendment called for it to be held on "Founder's Day" in October 1919, but labor unrest in Tonopah delayed that plan. After meeting with the women's groups, the governor agreed to the later date of February 7, 1920, provided the special session did not exceed costs of $1,000.

When the special session was held, Bessie Eichelberger was one of several speakers urging passage of the resolution, most pointing out that 27 other states had already ratified it, and that it was a duty of the nation.

After the ratification passed, Suffrage Committee Chairman Eichelberger and Florence Church, president of the Nevada Federation of Women's Clubs, wrote a thank-you letter to the governor and legislators for their action, and to reporters in the Nevada press corps for their "kind reporting" on the issue.

Her activism continued until ill health forced her into a nursing home in her later years. By then, she had become identified with the Nevada Equal Franchise Society, the Women's Citizens Club, the Reno Twentieth Century Club, the WCTU, the Order of Eastern Star, and the Indian Welfare Committee.

After having lived in Reno for 52 years, she died on April 30, 1943. She was survived by a niece and nephew. She is buried in the family plot in Masonic Memorial Gardens in Reno. 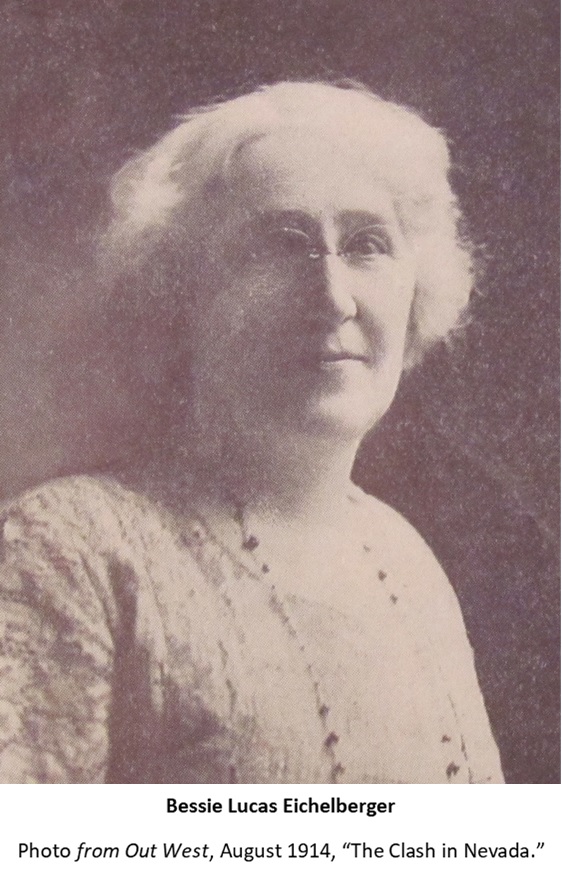