Biographical Sketch of May Elizabeth Murphy

May Elizabeth Murphy was born on October 3, 1885, in Wisconsin to Jerre Conklin and Pauline Olmsted Murphy. In 1900, the family resided in Milwaukee, and the three oldest daughters in the household were listed as students. They also employed a servant. By 1906, the Murphy family had moved to Helena, Montana, and May Murphy attended the University of Montana. Over the next few years, her name appeared in the Daily Missoulian society pages, particularly for her connection with the Delta Sigma sorority.

As a junior in 1907, May Murphy was a managing editor for the Sentinel, an annual publication of university activities at the University of Montana. The local newspaper, the Daily Missoulian, printed the bound book. In her senior year, Murphy was listed as also participating with the YWCA, the Clarkia Literary Society, the Associated Students of the University of Montana, and the Pan-Hellenic Council. Murphy earned her BA in literary studies in May 1908. After graduation, Murphy lived in Helena and remained active within the academic community. In January 1909, she hosted a luncheon for the university president's wife and Helena alumni. In March of the same year, she helped the transition of her sorority from Delta Sigma to the Beta Phi chapter of Kappa Kappa Gamma, an event also attended by Mary Rankin.

In the Delta Sigma sorority, May Murphy met Mary Rankin, sister to Jeanette Rankin, which likely connected Murphy to the woman suffrage movement. According to the History of Woman Suffrage, vol. 6, Murphy was one of the "old-time suffragists" who accompanied Jeanette Rankin in 1911 to the stand in a political address. Although extant records do not reveal if the Rankins led her to suffrage or suffrage led her to the Rankins, it is clear that the University of Montana connections brought Murphy and Mary Rankin into the same social circles.

After graduation, Murphy promoted public health and public recreation in Missoula. City directories show her working as a live-in nurse at St. Patrick's Hospital by 1911, a position she held until at least 1913. The same year Murphy began working at St. Patrick's hospital, she became "Playground Director" at the new Central School playground location established through the Missoula Playground Association.

The 1910 census listed May Murphy's occupation as a newspaper bookkeeper. In 1912, Murphy moved to San Diego, California. She returned occasionally to Montana to visit her university connections, but her parents and a sister, Hazel Murphy Smith, also relocated to southern California. May Murphy never married, and in 1940, she was listed in the census as teaching in Glendale, California. May Elizabeth Murphy died in San Diego on February 13, 1959. She was buried at Cypress View Mausoleum and Crematory in San Diego with her family. 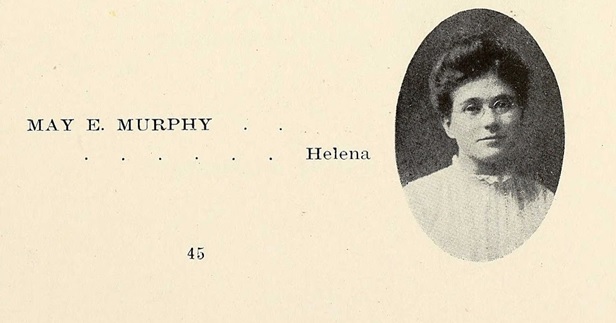