Mrs. Lowenstein, now a wealthy and very young widow, moved to New York and entered the New York School of Philanthropy, where she studied modern industrial conditions and was part of a study by the Russell Sage Foundation that looked at children who, due to poverty, were forced to leave school and obtain work permits. During this time, she supplemented her education attending night classes at the Rand School of Social Science. She graduated in 1916 and resolved to return to St. Louis. According to the St. Louis Star and Times she was active in the suffrage movement in New York, having "worked in Brooklyn for the New York suffragists last summer."

Once in St. Louis she accepted the position of Executive Secretary of the Children's Code Commission from Roger Nash Baldwin at the Civic League. While lobbying for the Commission, she moved to Jefferson City for the 1917 legislative session and shared a hotel room with Edna Gellhorn. In the fall of 1917, Mrs. Lowenstein requested the Republican city committee of St. Louis to take action to endorse women's suffrage and the resolution was passed in a unanimous vote. In December of 1917, while serving as Executive Secretary of the Equal Suffrage League, she traveled to Washington, D.C. to attend the National American Woman Suffrage Association with fifteen other St. Louis area suffragists. She also attended the Executive Council of the National American Women Suffrage Association in Indianapolis in April, 1918. Mrs. Lowenstein was elected to the Executive Board of the Missouri Equal Suffrage League in August of 1918. While acting for Mrs. Ernest W. Stix, President of the League, she called on the Democratic State Committee to recall Senator James A. Reed on a charge of discourtesy, charging he was the only member of the Senate who failed to stand when President Wilson entered the Senate chamber to address the senate on the suffrage amendment. Reed denied the charge and the committee failed to act. She pledged to mount an offensive to give women the vote by 1920 so that the women could rally to remove Senator Reed from office in the 1920 election.

Following Missouri's adaptation of the Children's Code in 1919, Mrs. Lowenstein moved to New York City to study the labor conditions in factories. She was active with the Civil Liberties Bureau at this time. When it disbanded, she became the executive secretary of the American Civil Liberties Union. In the spring of 1920, she married Joseph Milner in Chicago and the two returned to New York so she could continue her appointment with the ACLU. Following the arrival of twin daughters in 1922, Mrs. Milner travelled extensively in support of the ACLU. She stayed at the ACLU for twenty-five years. In 1954, she published her autobiography Education of an American Liberal. She died August 14, 1975 at the age of 87 in New York City. 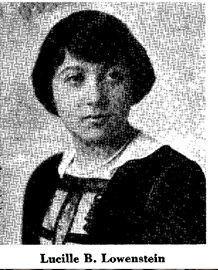