Belle O'Hair was born in March of 1868 in Laurel, Indiana to James O'Hair (from West Virginia) and Mary Jane Hazelrigg O'Hair (from Kentucky). She had eight siblings, Edgar, John, Lilla, George, Alice, Lulu Kate, Zella and Augusta. After finishing school, she began teaching at Benjamin Harrison School in Indiana.

O'Hair helped found the Federation of Public School Teachers whose mission was "to promote intelligent understanding in the community of the interests which public school teachers represent and to secure whatever is legitimate through cooperation." At their annual meeting in 1911, she addressed over 700 teachers saying that the federation had "been instrumental in getting four increases in salaries for the teachers during the last three years; had inaugurated a pension system; and had succeeded in obtaining better conditions for substitute teachers." She served as its president for 11 1/2 years. Later she served as president of the Indiana State Teachers Federation for two years. The Indianapolis Public Schools sent her to England in 1920 to study elementary and secondary school programs. In 1933, Belle O'Hair was forced to retire due to her age. She sued the Indianapolis Board of School Commissioners for $16,000 for discharging her based on age discrimination.

She was considered an excellent speaker and one of the most prominent suffrage workers in the state of Indiana. She was a charter member of the Women's Franchise League of Indiana (WFLI) which advocated for women's suffrage and regularly traveled the state giving speeches.

She died in March 1943 after a long illness and is buried in Crown Hill Cemetery in Indianapolis. 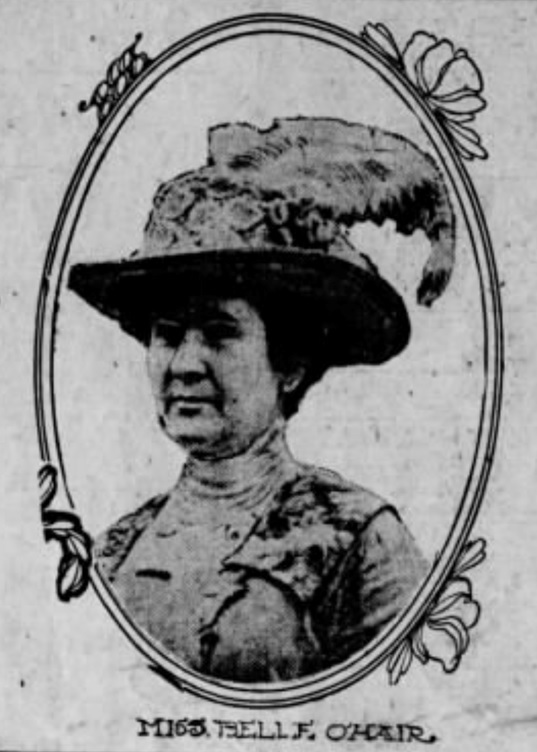