By Erin A. Frederickson, Independent Historian

Mack and her family moved to Reno sometime before 1900. The couple appears in the 1900 census and then the couple with their children in 1910. In 1920 Orel appears as a roomer living alone. A death record indicates that Orel died in 1928 and in the 1930 census Emma was listed with a new husband, Charles E. Mack.

In Nevada, Mack worked with numerous suffrage organizations and was a dedicated member of the Nevada Sagebush Chapter of the Daughters of the American Revolution. She also served as the president of the state's Federation of Women's Clubs. In this role, she was part of a group of women who passed a resolution endorsing suffrage: "Resolved, That the Nevada State Federation of Women's clubs give the cause of political equality for men and women its moral support by recording its earnest belief in the cause of political equality regardless of sex." (Sacramento Union, 1914)

In 1910, Mack sent invitations to each of Nevada's women's clubs to join a statewide meeting to establish an equal franchise society, molded after that formed in New York City in 1909. With her help, the Nevada State Equal Franchise Society was established in 1911. Mack served as vice-president of the society, which touted 177 male and female members. The society went on to write a draft of the women's suffrage legislation that would eventually be passed by the Nevada state legislature in 1914.

Mack's women's rights advocacy continued into the 1920s. Mack wrote The History of the Suffrage Movement in Nevada, 1900-1920 in 1920 and recounted the history of the Nevada Equal Franchise Society in The History of Woman Suffrage in Six Volumes published in 1922. In 1928, after Eleanor Roosevelt stated that women were often "frozen out" of politics by men, Mack was quoted by the Reno Evening Gazette:

Suffrage is not a failure in Nevada but it may be in New York state as Mrs. Franklin D. Roosevelt has said. From my experiences on Republican county, state, and platform committees, I have found the men of the party to be willing and ready to consider the requests of the women. As a member of political groups during campaigns, the men have sought advice and help form the women in solving their problems. It may be true that in Tammany-controlled New York state, the women may be experiencing some difficulty in gaining recognition...I am glad that I live in Nevada where the men granted suffrage to women in seven years instead of waiting seventy years as in New York state. In fact, I feel quite like Carrie Chapman Catt who said that "the women have so many privileges now that I feel like turning in and helping the men."

Upon her husband's death in 1928, Mack shared her home with daughter, Effie. Mack died of pneumonia on December 5, 1947. Her daughter, Effie, donated much of her mother's papers relating to Nevada's early 20th century women's history to the Nevada State Historical Society. She is buried at Mountain View Cemetery in Reno, Nevada. 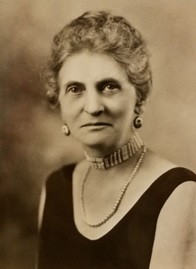