Mary Elizabeth Crandall was born on February 22, 1865 in Owatonna, Steele County, Minnesota into a family active in civil service. Her father was a Minnesota state senator, postmaster, and editor of the local newspaper, as well as a hardware seller. Ms. Crandall graduated from Pillsbury Academy in Owatonna in 1882 at the age of 17 and went on to pursue a degree at Cornell University.

After attending Cornell, Crandall became a teacher and served as principal for both the Preston and St. Cloud high schools in Minnesota. In 1890, at the age of 25, she married Clarence L. Atwood.

Mrs. Atwood was very involved in women's clubs and is referenced as being part of leadership for organizations such as the National American Women Suffrage Association (NAWSA), the Minnesota Federation of Women's Clubs, and the women's club Sorosis. She gave the welcoming speech at the State Federation of Women's Clubs convention in St. Cloud in October 1899. The Minneapolis Journal reported that she "struck a unique and happy" vein in her speech, in which she joked that she would happily offer the keys of the city to the women in attendance, if they only had pockets to keep them in.

Atwood was also active in the Unitarian Church and served as president of the St. Cloud Reading Room Society.

Mrs. Atwood had four children. She passed away on October 24, 1930, in Stearns County, Minnesota at the age of 65. 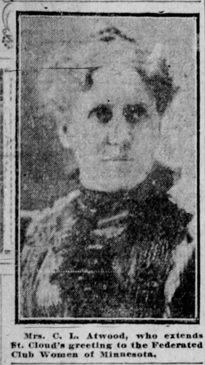 Mary Dillon Foster, Biographical Sketch of Mary Elizabeth Atwood in Who's who Among Minnesota Women: A History of Woman's Work in Minnesota from Pioneer Days to Date (St. Paul, 1924).