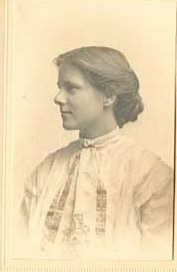 Elsa Ueland, born on March 10, 1888 in Minneapolis, Minnesota, was an educator, lecturer and suffragist. She was the eldest child of Andreas and Clara Hampson Ueland [LINK to bio sketch]. Elsa's mother Clara was a noted suffragist in her own right and founded the Minnesota League of Women Voters. From a young age Elsa had a passion for the suffrage movement.

Ueland graduated from Minneapolis's Central High School in 1905, and enrolled at the University of Minnesota where she joined the Phi Beta Kappa sorority. In 1907, she co-founded and served as the president of the University of Minnesota chapter of the College Equal Suffrage League, a national suffrage organization. Ueland graduated in 1909 with a degree in sociology and psychology. In 1912, she received an A.B. degree from Columbia University.

Following her graduation from Columbia, she moved to Gary, Indiana where she served as a secretary to the superintendent of schools William Wirt, a progressive educator and progenitor of the "Gary Plan." The plan was a part of the progressive education movement in the early 1900s, which sought to increase efficiency and educate the whole child. The Gary Plan advocated a "work-study-play" model, of which elements still can be seen in the multi-period high school schedule and arts curriculum. For Ueland, the plan centered around educating women to do the same things men did. During this time, she also served as an organizer for the Congressional Union for Women's Suffrage (CU). Our last surviving evidence for her work with the CU is a Library of Congress photo dated 1915.

In 1916, Ueland was asked to become the president of the newly founded Carson College for Orphan Girls in Flourtown, Pennsylvania, a suburb of Philadelphia. When the school opened in 1918, it was a traditional orphanage under Ueland's guidance, it grew to be an alternative education school built on the Gary Plan.

Ueland ran the college much like an extended family. As girls graduated and aged out of the college, many returned as house mothers.

Through the first half of the 20th century, Ueland was a frequent speaker at suffrage and educational events, emphasizing the necessity of outdoor play for childhood development. In her later years at the college, Ueland was frequently troubled by the flagging energies in herself and her aging staff. In 1958 Ueland retired as president of the school, by then called the Carson Valley School. She remained on the board of trustees until 1967. One favorite tradition in the community was a cup of hot chocolate in Ueland's home every Christmas Eve.

Ueland lived with depression her whole life, but she remained active in the local community until her death in 1980.

Columbia University. Catalogue of Officers and Graduates of Columbia College: Originally the College of the Province of New York Known As King's College. General Catalogue, 1754-1916. New York: Printed for the college, 1916.