Lucy Norwood Phillips was born on March 3, 1851 to Mary Mendenhall Pusey and James Meredith Phillips. In 1876, the college-educated woman and her family moved from Pennsylvania to the rural upstate town of Easton, New York. There she married a farmer by the name of George Sylvester Allen and had two children, Anna and George.

Lucy Allen, a Quaker, became an important figure for the suffrage movement in this small, rural community. She served as founder of the Easton Political Equality Club, founded in 1891, president during its most active years and contributor to the rural suffrage movement. She raised money for the club by directing a three-act play called "The Blue and the Grey," performed at the local theater, Hubbard Hall in Cambridge, New York. The considerable proceeds went to the club. Her mother, Mary, also helped with the club; on one occasion she meticulously cut out individual cardboard letters that read "Political Equality Club" for display outside the local PEC headquarters. Lucy P. Allen was not only the president of the local Easton Political Equality Club. She also served as the president of the Washington County branch of the New York State Woman Suffrage Party. She and Chloe Sisson, a co-founder of the Easton PEC and Lucy's close friend, held meetings regarding women's suffrage and advertised meeting times in local newspapers.

Lucy Norwood Phillips Allen lived to see women gain the right to vote. Once the Nineteenth Amendment passed, there was no longer a need for the political equality club in Easton. Therefore the club dissolved and Lucy went on to care for her farm and children with her husband, George. She helped found the Easton Library, which was located in its early years in Burton Hall. Presumably widowed, she later resided with her daughter, Anna Pratt. Lucy died on December 14, 1946 and is buried at the Rural Cemetery in Easton, NY. 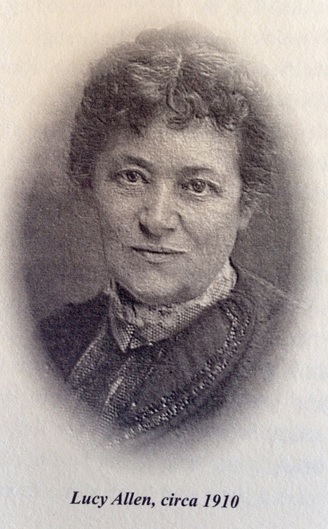