Marguerite/Margaret Nillie Hildegarde Rorke* née Hayden was born in New York, NY on June 19, 1883. Her parents were William Richardson Hayden and Katherine Elizabeth Farson. A Confederate veteran from Virginia, William Hayden became established as a manager of circuses, minstrel shows, and theater productions in the New York region. The Hayden family was considered wealthy by William's death in 1897 and Margaret attended elite schools such as Mount Vernon Seminary in Washington, DC and Pennington Institute in Hopewell, NJ.

From roughly 1903-1906 and against her late father's advice, Margaret had a career as an actress where she was described as "rather tall and 'of the Gibson girl type.'" She married fellow New Yorker William H. Rorke in 1907. Initially a medical student, William was by 1910 working in his family's trade of crockery, by 1915 a writer for the NY Press, and by 1920 a concrete supplier. Meanwhile for the early part of the marriage, Margaret no longer had a listed profession.

By 1913, Margaret joined the Woman's Suffrage Party (WSP). She spoke out in favor of suffrage on the part of Catholic women in particular, and wrote a letter to the Cardinal Archbishop of Baltimore James Gibbons seeking his thoughts on the issue. The next year, "[p]rompted by the desire to correct the prevalent impression that the Catholic Church is officially opposed to Woman Suffrage," she published Letters and Addresses on Woman Suffrage by Catholic Ecclesiastics, a compilation of pro-suffrage tracts. 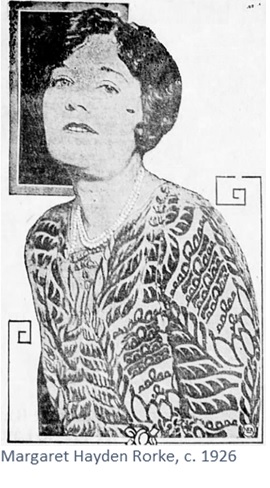 Ahead of the 1915 NY State referendum on women's suffrage, Margaret was involved in a flurry of activity. By then chairman of the WSP Catholic Committee, she additionally served on the executive committee of the Brooklyn WSP, where she gave speeches and wrote op-eds and canvassed for the vote. In March of that year, she notably helped organize a 5,000-strong suffrage rally which featured the New York City mayor John Purroy Mitchel and US senator Moses Clapp. This event also featured the first occasion in which a Catholic priest spoke in favor of suffrage from a public platform.

Following the success of the suffrage movement, Margaret embarked on a new career in the textile industry, initially serving as publicity director for the US Textile Color Card Association (TCCA). During her long tenure with the TCCA (1919-1954), she rose to the position of managing director and became known variously as America's "color authority," "color dictator," and "queen of color." Her many accomplishments included coordinating with then-Commerce Secretary Herbert Hoover to standardize the three colors of the American flag, and creating colors used in gowns worn by Eleanor Roosevelt and Mamie Eisenhower at the presidential inaugural balls of 1933 and 1953.

Margaret continued to advocate for important causes, at one point leading a drive for donations to the allied Chinese blood bank during World War II. She was also a founding member of the American Society of Association Executives. She died in Los Angeles, CA on March 2, 1969, where she was survived by three sons, including the actor Hayden Rorke.

*Rorke is referred to as Mrs. William H. Yorke [sic] in the History of Women's Suffrage's list of New York Catholic suffragists.

The Attitude of the Catholic Church Toward Woman Suffrage. Baltimore Sun, May 9, 1915, 8. ProQuest.

Here's a Woman Who Tells a Nation-Full of Feminity What Colors to Wear. Washington Post, May 3, 1934, 13. ProQuest.