Helen "Nellie" Margaret Leavitt née Quinn was born in Buffalo, NY on May 20, 1876. Her parents were Henry Quinn, an Irish grocer by trade, and Eva Flick, a second-generation Bavarian-American. Helen's early education is unclear, but an older cousin who was a teacher was recorded as living with the family in Buffalo by 1880.

Helen married insurance agent Charles Leavitt in 1899 and the couple spent the early years of their marriage living in the Quinn home, by which time Henry Quinn's profession was a "solicitor for house." In the ensuing years, the elder Quinn acquired close personal connections, notably with US District Court Judge John Raymond Hazel who was perhaps best known for administering the oath of office to Theodore Roosevelt in 1901. The Hazel family remained life-long friends with Helen, at one point embarking on a road trip together to visit then-Chief Justice William Howard Taft at his "enchanting cottage home" in Murray Bay, Quebec.

Charles's insurance work led to the family's relocations to Syracuse by 1910 and to Albany by 1915. Helen maintained social connections, including with the Society of New York Hospital and the Syracuse chapter of the Order of the Eastern Star. She was supported in this regard by Charles, a Mason of "high social standing" who was "popular in the extreme." 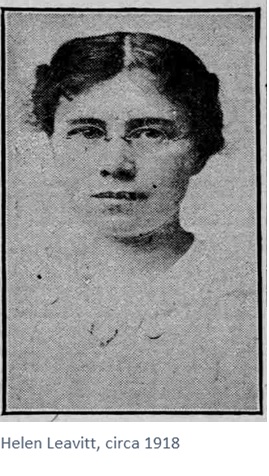 Early 1916 marked two pivotal points in the course of Helen's life. Following a recent defeat of women's suffrage at the ballot, the New York State Woman's Suffrage Party (NYSWSP) tapped Helen as legislative chairman. Here, she assisted Vira Boarman Whitehouse in overseeing progress through the NY State Legislature of a renewed resolution for the long-desired women's suffrage amendment. After months of hard-fought battles in the Senate and Assembly, the resolution was finally passed by both chambers on April 10th, 1916. That same day however, Charles was found dead from accidental gas asphyxiation in an Albany hotel.

Charles's untimely death came as a shock - indeed up to 1915 Helen had no formal occupation to support herself or her daughter Martha. It is around this point that Helen increased her dedication to the suffrage movement, holding the office of NYSWSP executive secretary. With the momentum from the passed 1916 resolution, the NY legislature formally passed the suffrage amendment in March 1917 and placed it on the ballot for a statewide vote that November. In the leadoff to Election Day, Helen frequently met with voters and warmed them the suffrage cause. In one oft-quoted example, she offered data demonstrating NY legislators' increased favorability of women's suffrage since the 1915 election cycle, concluding "suffrage is now an important plank in the platforms of both the Republican and Democratic Parties." Following the US's entry into World War I, she worked within the NYSWSP to permit women nurses and war workers in France to act as poll-watchers for male New York residents stationed at the front. She gave at least one speech promoting the suffrage movement in her hometown, and was referred to as "one of the ablest politicians of the NYSWSP."

Following the successful passage of the suffrage amendment to the NY constitution in November 1917, Helen remained dedicated to social change. The following year she lobbied the NY legislature for expansions to voter registration and encouraged women to vote in party primaries. Moreover, as an "expert on election laws," she was appointed the only woman member of the NY State Overseas Commission and tasked with collecting the ballots of men and women serving with the armed forces in Europe.

Helen eventually relocated to New York City, where by 1920 she served as office manager for the New York Tribune, a newspaper. From 1927 she served on the newspaper's board and eventually was promoted to advertising executive. She traveled to Europe frequently - including a transatlantic flight on the airship Hindenburg in 1936 - and attended parties such as the 75th and 80th birthdays of national suffrage leader Carrie Chapman Catt. Helen continued working at the New York Herald-Tribune until shortly before her death on August 3, 1947.

Tells of Power Women Have in Primary Voting. Rochester Democrat and Chronicle, May 16, 1918, 19. ProQuest.