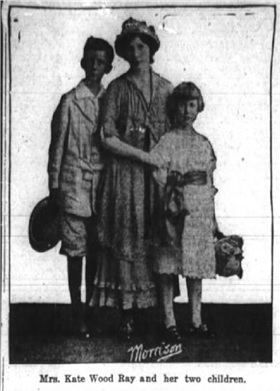 Kate Wood Ray was born in 1876 in Scotland and in 1888 the Wood family immigrated to the United States. She later became a naturalized citizen. At the age of 28 Kate Wood married George W. Ray of Massachusetts (born 1876). The couple had two children: Gordon W. Ray, born in 1905, and Helena R. Ray, born in 1908. The family lived in Chicago, Illinois, though much of Wood Ray's early activist work (mainly between 1913-1917) took place in Gary, Indiana.

Wood Ray had a lengthy resume as a suffragist and held many positions of leadership in her mid-30s through her early 40s while also raising her two children. In 1913, Wood Ray served as president of the Gary, Indiana Civic Club. Wood Ray was offered the position as head of the police in Gary, which she declined the position, instead accepting appointment as the president of the Gary Safety Board. That same year, she spoke to the Women's Franchise League in Illinois regarding the national significance of the campaign of women in the Fifth Judicial District of Illinois. In 1915, Wood Ray served as Chairman of the Educational Department of the Indiana Equal Suffrage Association, to which she often gave lectures to the public. In an article announcing the event that she would speak at, she was referred to as "aggressive" in being outspoken of her beliefs and "ideas along civic and suffrage lines." A later publication stated that Wood Ray was still considering the role of head of the police, speaking out against a case of police brutality, calling it "outrageous." It was in this same interview that she spoke out specifically on women's suffrage, stating that: "Without the vote, women can do nothing," and that they are "utterly ignored until they have the power of the ballot." By 1916, Wood Ray served as the press chairman of the Indiana Equal Suffrage Association, where she also advocated for equal pay. In 1917, Wood Ray was chosen as vice president of the Indiana Mayors and also held the role of the Gary park commissioner. In 1918, Wood Ray spent much of her efforts encouraging women to do their part during World War I; She did so in urging others to join the women's division of the Council of National Defense, of which she was the state organization advisor.

Other work that Wood Ray involved herself in beyond 1918 was scarcely reported in news publications. In 1919 and 1920, Wood Ray was mentioned in publications for her efforts regarding women's health and hygiene and raising awareness amongst girls and women pertaining to "social disease"; she often gave lectures surrounding the topic. In 1922, Wood Ray's assistance in war efforts was noted; She was involved in the planning of a Boosting Benefit in Chicago, which raised money to aid disabled soldiers. In 1926, Wood Ray was an employee of the Public Health Institute while also attending night school. It was reported that same year that Wood Ray, 51, was among the graduates of the University of Chicago who were elected to Phi Beta Kappa honorary society. The last mention of Mrs. Wood Ray in a news publication was in a piece about her daughter, Helena, in 1936. 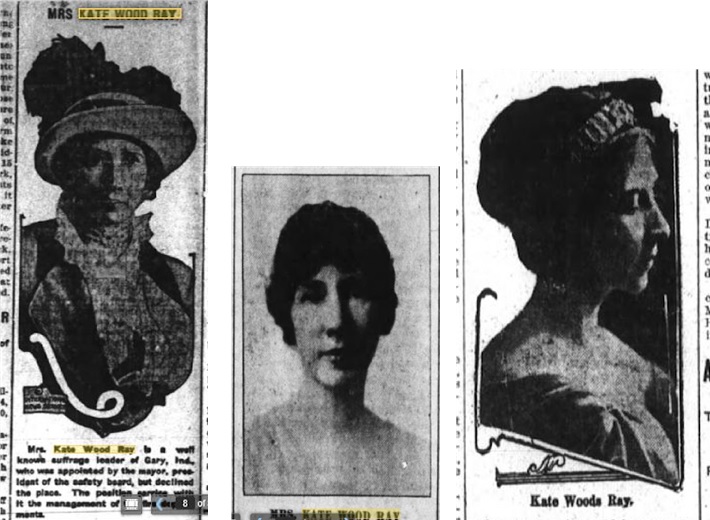