Mary Sarah Carter Winter was born on January 1, 1890 in Georgia. She was a lifelong resident of the state. Mary married Rogers Winter and together they had four children, including a son named Rogers Winter. In addition to her work in the club movement, she was also a clerical worker as well as a "newspaper woman" in the early 1900s.

Mary Winter was heavily involved in the Georgia Federation of Women's Clubs and served as its chairman. In 1919 she participated in a conference for state federations of suffragists held in Columbus, Ohio. Winter was also active in promoting the legacy of the Confederacy as well as with combating illiteracy. On November 13, 1919, Mrs. Rogers Winter represented the Georgia Illiteracy Commision and gave an illiteracy report. After her involvement with the 19th Amendment, Mary spent much of her documented time on social engagements closely tied to white supremacist activities. Her fundraising for the creation of the Stone Mountain monument honoring the confederacy is especially well documented.

On November 27, 1924 Mary entertained visitors at a luncheon and then headed with some guests to Stone Mountain to view the Confederate memorial that was under construction. Winter also held the position of editor of the department of the Confederated Southern Memorial Association of the Confederate Veteran. Winter's political work is a strong example of white supremacist activity within the women's suffrage movement during the progressive era. She was also politically active with the Daughters of the Confederacy. In 1928 she planned the 34th convention of the United Daughters of the Confederacy which was held in Atlanta in October. In addition, that year she gave a speech that was well documented in newspapers throughout the South. Numerous newspapers recorded her speech as the following:

"Without sword or flag, and with soundless tread we muster once more our deathless dead, Out of each lonely grave." Like the echo of a bugle call to action from the bivouacs of the dead comes the call of the Children's Founders Roll, summoning the people of the South to unite in honoring "The men by Lee and Stonewall led." Long ago they died. Some asleep now beneath the columned witness of cold marble; some, in silent, serried ranks, maintain the comradeship of war; and some life, lost and lonely in nameless graves on fields of battle hallowed by the blood of heroes. Our dead! Shall the ages efface their name and story, as Time and Death aling school in Selma spent the week blance of their souls? Or shall we bring "up from the dust of the dead" the undying glory of the past? Let us give the ages the record of a people's valor, a people's pride, people's sorrow and a people's LOVE. Enroll the children of the South now in memory of their Confederate ancestors. Work at the mountain is progressing very satisfactorily. The figure of Lee, from the Lukeman model, is nearing completion and the time is not far distant when the South will have the satisfaction of beholding the first unit of the Memorial in finished form.

In the 1930 census, Mary was listed as living in DeKalb, Georgia. During World War II, both her son and her husband were drafted into the war. Mary Winter died at age 85, on September 20, 1975. She is buried at Woodlawn cemetery in Perry, Florida.

9)"Enthusiasm Is Evidenced For National Thrift Move At Meeting of Federation" The Atlanta Constitution, November 14, 1919 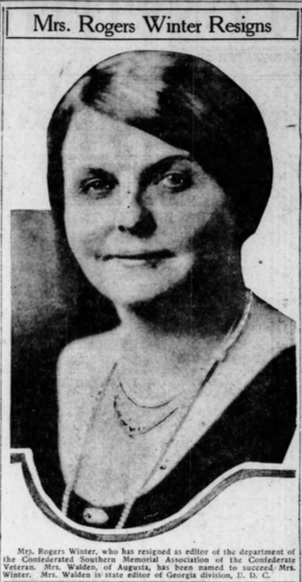