Helen Stearns Attwood was born Helen King on July 27, 1843 in Minot, Maine. Her parents were Cyrus King, a farmer, and Mary Staples Dean; both "were of pioneer blood and stock." Helen was the third of Cyrus and Mary's four children: Maria was the first, followed four years later by Elliott, who was followed in turn two years later by Helen, then Chloe two years after Helen. In addition to his four children and wife, Cyrus King's household in 1860 included an eighteen-year-old named Edward Yeaton, possibly a farmhand.

In 1860, Cyrus King, who was 53 years old at the time, could boast ownership of real estate valued at $4,000 and personal estate of $1,500. Combined, these valuations put the King family comfortably above the national wealth average of $3,289 for a male-headed household.

On January 19, 1863, in the second year of the Civil War, Helen S. King married George B Attwood, five years her senior and a Maine native. They were married in Auburn, Maine and settled in Minot. By 1870, Helen, then 27, and George, then 32 and a "shoe dealer," had a son, Elton R. Attwood, aged 6. Helen is described in the 1870 census as "keeping house" for the family.

Helen was still keeping house when the census was counted in 1880. Her son (referred to as "Roscoe" in the census document and "Roscoe E. Attwood" in the Lewiston Evening Journal's obituary of his mother) was a teenager, and the family was still settled in Minot.

Sadly, by 1908, Helen was a widow. Her husband, George, had died in November of 1902. She had apparently moved her residence to Lewiston, Maine, as according to the Lewiston, Maine, directory, she was living at 65 Goff Street.

When the 1910 census was counted, Helen was 67 years old and still living at 65 Goff Street in Lewiston, now as the head of the house, which she owned free and clear. At this time, Helen received income by taking in boarders. Her household consisted of Chloe D. Ansons (Helen's sister, 65), Ellie E. Attwood (bookkeeper in a department store, 46), Annie F. Foss (possibly a live-in servant, 34), Ethel Pottle (paster in a shoe factory, 32), and Bertha Pottle (bookkeeper in a shoe factory, 23).

The movement in Maine toward equal rights for women was begun in 1854, ironically, by a man, Thomas M. Hayes, a champion of suffrage so revered it was considered that a monument should be erected at his grave. The women of Maine directly grabbed the baton from Hayes and began organizing based on sentiments and grievances propounded by the 1848 Suffrage Convention held at Seneca Falls, New York. Maine's Woman Suffrage Association was founded in 1873 as a permanent organization. The organization evolved over time, with several changes of leadership, until by 1905, Helen S. Attwood was named the organization's Vice-President-at-Large. Between 1885 and 1907, the organization churned out much legislative work, including bills for full municipal suffrage.

Helen S. Attwood died on Friday morning, April 26, 1912, in the Central Maine General Hospital in Lewiston at the age of 68. She had been in failing health for two years.

She was eulogized as "one of the most prominent club women of Maine" as well as "very active" in the First Universalist Church of Auburn, and praised as "always cheerful, hopeful, and courageous."

Throughout her life, Helen had been very focused on the education of young children, particularly kindergartners, and had spearheaded construction of several recreation centers in Lewiston and Auburn.

In the late 1890's, Helen Attwood began her civic involvement by becoming active in neighborhood "clubs." She was a founding member of the Idyl Wilde Association and a member of the Women's Literary Union. She was "an ardent believer in and supporter of Equal Suffrage." Though records are not detailed as to Attwood's work within the Maine Suffrage Association, as its Vice-President-at-Large she was an active and effective public speaker for women's right to vote.

Per the Lewiston Evening Journal, "there never was a busier woman in this community and, yet, never one more willing to give of her time, herself, and her money...when they were needed...." 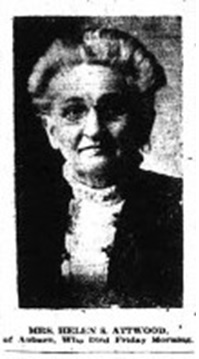