Jennie Hart Sibley was born Sarah Virginia Hart on October 22, 1846 to James B. and Maria Collier Hart in Augusta, Georgia. On November 15, 1865 she married Samuel Hale Sibley. Jennie is recorded in sources as both Jennie H. Sibley and Sarah V. Sibley, but it appears she used the name Mrs. Jennie Hart Sibley most often. In the 1870 United States Census, Samuel was recorded as being a cotton merchant. Jennie had six children, including Jennie born 1870, Kate/Katie born 1872, Samuel born 1874, James born 1876, Josiah born 1877, and Grace born 1878. Her husband Samuel died on December 11, 1883 in Atlanta, Georgia, leaving Jennie a widow at 37 years old. She never remarried.

Jennie was a prominent member of the Georgia Federation of Women's Clubs and a leader in the Georgia Woman's Christian Temperance Union (WCTU), serving as president from 1900-1905, later being made honorary president. As superintendent of legislation and petition, Jennie attempted to have two bills introduced to the Georgia legislature, one to increase the age of consent and the other on child labor reform. Coinciding with the state suffrage convention, Jennie spoke at the Georgia State Capitol on July 9 and 10, 1907. That same year, she became a member of the National American Woman Suffrage Association. In January 1907, a newspaper article ran in several southern newspapers that reported on a meeting of southern women suffragists held in Memphis, Tennessee, with Jennie listed as president of the Georgia Equal Suffrage Association. In this article, the southern suffragists outlined their beliefs, including that political liberty should not be limited by sex, that all women who can read and write should get the vote, that suffrage would provide political power against problems like low wages for women and child labor, and that they "ask for the ballot as a solution to the race problem." They went on to say that "if the women of the South were enfranchised it would insure a permanent and enormous preponderance of the white race in politics, and would preclude the necessity for any doubtful expedients to minimize the negro vote."

Sibley continued to work for woman suffrage as superintendent of the Legislation Department of the WCTU. In a 1915 WCTU report, she mentioned suffrage petitions she had submitted to Congress and the state legislature in recent years. 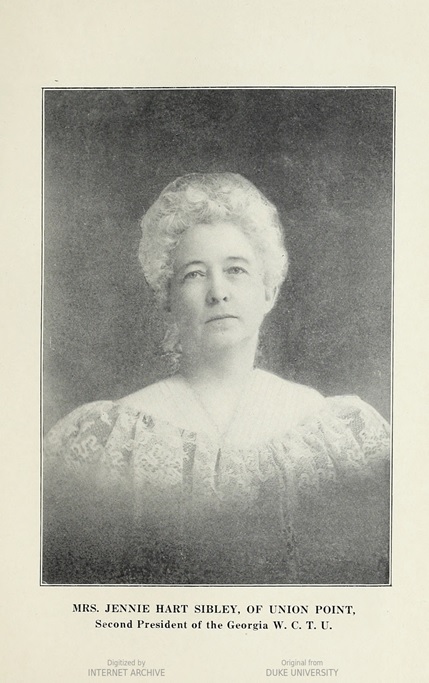