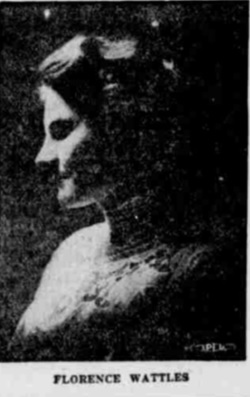 Florence Adeline Walters was born on December 7, 1887, in Crystal Lake, Illinois, to Wallace Delois Walters and Abigail (Bryan) Walters. The family lived in both Elwood and Kokoma, Indiana and changed their surname from "Walters" to "Wattles" sometime before 1910. Florence had one brother, Russell, and one sister, Agnes.

Between the years of 1911-1920, newspapers across several states covered Florence's lectures. A 1911 article seen in the Richmond Palladium states that, "Miss Wattles' address was one of the most successful ever given under Socialist auspices in this city." Additionally, in 1912 the New Ulm Review wrote that, "Miss Wattles is a slight, girlish-looking young woman; she hasn't in any degree the appearance of a political agitator but when she speaks her voice shows that it has been developed in the school of socialist oratory." A 1916 Indianapolis News article quoted Florence as stating, "We don't want to vote merely because it is our right ... We don't want to vote merely to get into practical politics. We don't want to vote in order to sit in the legislature or on the bench. We want to vote on behalf of the struggling masses, and to do good for those about us." Florence was a frequent speaker at Indiana suffrage gatherings.

Florence moved to New York City and worked at E.P. Dutton Publishing Company. She became the agency's director of publicity in 1925.

Florence married William G. Bowers, an electrical engineer for the New York Telephone Company, on July 25, 1921, in Manhattan, New York. The couple had no children. Florence died on November 23, 1947 and is buried in Ferncliff Cemetery and Mausoleum in Hartsdale, New York.

"Both Parties had Hides Lifted by Miss Wattles: Suffragist and Socialist Before Large Audience of Men and Women Gave Address on Politics." Richmond Palladium, November 1911, Richmond, IN, Vol. 36, no. 361, pg. 6.