Elizabeth Jones was born on May 1, 1865, in Portland Oregon to John Halsey Jones and Jane Osborn Jones. Her father, a pioneer who settled in what would become Portland in 1852, founded the region's leading sawmill and lumber yard. In 1880, just short of 15 years of age, Elizabeth married Joseph Holt Struble, with whom she had two children. In 1898, Elizabeth borrowed $30 and began to publish (as a short pamphlet, at first) The Nautilus Magazine of New Thought, which advocated "self-help through self-knowledge." Two years after launching her magazine she divorced Struble and moved to Holyoke, Massachusetts, to marry William E. Towne, another New Thought author. Together, Elizabeth and William built a publishing empire and expanded the magazine's circulation to 90,000. Elizabeth, moreover, wrote over a dozen New Thought books, which were translated into multiple languages, and her speaking engagements took her all over the world. Her publishing company, The Elizabeth Towne Company, which was incorporated in 1911, also published the works of a number of other leading thinkers in the New Thought Movement, such as author and poet Ella Wheeler Wilcox. Towne eventually became a minister of the Church of the Truth and from 1923 to 1925 she presided as president of the International New Thought Alliance. She continued to publish The Nautilus Magazine of New Thought until her retirement in 1953, at the age of 88.

The central message of the New Thought movement was one of self-fulfillment through the power of positive thinking. It was closely related to Christian Science and a precursor of the New Age Movement. Towne's (and Wilcox's) version of New Thought philosophy was distinctive in its affirmation of female sexual desire. Like other New Thought leaders, Towne combined a message about individual self-fulfillment with a progressive social message concerning political reforms for the benefit of all. Her magazine carried articles highlighting the remarkable economic success that southern blacks had achieved in the 40 years since the Civil War and arguing that they now needed equal access to education and economic opportunity. Concerning relations between labor and capital she asserted to Joe Toye of the Boston Herald, "You must admit that while neither's hands are absolutely clean, the capitalist is more unwilling to admit that the other fellow has a case. They have arguments. The capitalist goes out and hires the sharpest, crookedest, most expensive lawyers in the world and tells them to do so and so and not budge an inch from that position. So they don't budge." Some of Towne's social justice positions are as relevant in the early twenty-first century as they were in the early twentieth: the major problem with society is that wealth is concentrated in the hands of the one percent, which controls the politicians; the major cause of poverty is the failure to pay a living wage.

Towne's arguments in support of woman suffrage emphasized both spiritual and social justice issues. In the October, 1915, issue of the Nautilus she argued that the U.S. was not yet a republic because half its citizens could not vote, and the eight million working women of the U.S., many of whom lived in households without men, needed the vote if they were to receive any kind of representation in government. In an article for the September 16, 1915, Special Suffrage Edition of the Holyoke Daily Transcript, she gave a first-hand report on how well women's right to vote was working in California and Oregon, emphasizing that it was women's influence that helped bring about major social reform in those states, such as an eight-hour work day for women, a minimum wage for women, a mother's pension, an employers' liability law, and sanitation standards for factories. In an interview with O. Terence, she blamed the formation of a society in which people served the interests of capital on the fact that men alone voted: "In America up to the present time men have made [the environment], by vote and boss rule. Men bossing the voting have made the present humanity-for-money environment. Men think in terms of money. It is time to give the women opportunity to help vote into existence a money-for-men environment. Women think and feel in terms of humanity, of children and fathers."

Towne also developed Biblical arguments in behalf of Woman Suffrage. In a second article for the Special Suffrage Edition of the Holyoke Daily Transcript, she built on Elizabeth Cady Stanton's exegesis of Genesis 1:27: "in the image of God He created him, male and female he created them." Stanton had used this passage to argue for the equal presence of both male and female in the godhead, for the simultaneous creation of man and woman, and thus for the equality of the sexes. Towne applied this analysis to the political realm. Building on the idea that the image of God can be present only if both male and female are present, Towne argued that a so-called republic that allowed only men to vote was not reflective of God's will:

"Let every adult vote, and we get God's vote through the majority...As long as women are kept from voting we get man's vote, not God's. God created man male AND female and he gave THEM dominion."

In addition to her publishing and international speaking career, Towne was deeply involved in political and social organizations. In 1912 and 1916 she served as a delegate to the national Progressive Party Convention. In 1913-5 she spoke throughout Western Massachusetts and elsewhere in behalf of Woman Suffrage. In 1914 she was elected a vice president of the Holyoke Equal Suffrage League, and in 1915 and 1917 she served as a Massachusetts delegate to the National American Women Suffrage Association national convention; she was joined in 1915 and 1917 by Minnie Ryan Dwight (LINK) and in 1917 by Nellie Boland (LINK) -- both from Holyoke. From 1918-21 she served as Vice President of the Hampden County Women's Club of Western Massachusetts, a group with close to 1,000 members; during World War I she served as secretary for Hampden County for the women's committee of the National Council of Defense; in 1919 she served as director of the Massachusetts State Federation of Women's Clubs; and from 1921-23 she served as its President. In 1919, she helped found and then chaired the Holyoke Open Forum. She assured that the group that organized the Forum included representatives from Holyoke's Polish, French, Italian and German Societies, among others, and she organized talks for the Forum by nationally acclaimed speakers on social issues, such as Rabbi Stephen Wise and socialist John Spargo. From 1925 to 1931 she served as president of the Holyoke League of Women Voters, and for three years she was on the board of directors of the Massachusetts League of Women Voters. In 1926, moreover, she became the first woman to be elected to the Holyoke board of aldermen, declaring, as quoted in the Boston Herald soon after she announced her candidacy, that she hoped that women would come to serve in all branches and at all levels of democracy, including the Supreme Court and Congress, because, "without women on a board, its decisions are bound to be one-sided."

In 1928, Towne became the first woman to run (unsuccessfully) for the office of mayor of Holyoke. In 1929 and 30 she served as elected President of the Holyoke Business and Professional Women's Club, and she continued to serve as a leader in that organization until the end of that decade. In 1939, she served as a delegate to a national women's convention in Washington, D.C. on the Cause and Cure of War; while she was there she also spoke to the Women's National Democratic Club. She also served as chairman of the Street Sanitation Committee of the Holyoke Women's Municipal League.

For nearly the last decade of her life, Towne was confined to a wheelchair. When she died, at age 95, she was attended by her husband, her two children - Chester H. Struble, and Elizabeth (Struble) Twing -- and by her granddaughter, Catherine Struble. Her death was noted in newspapers throughout the United States. 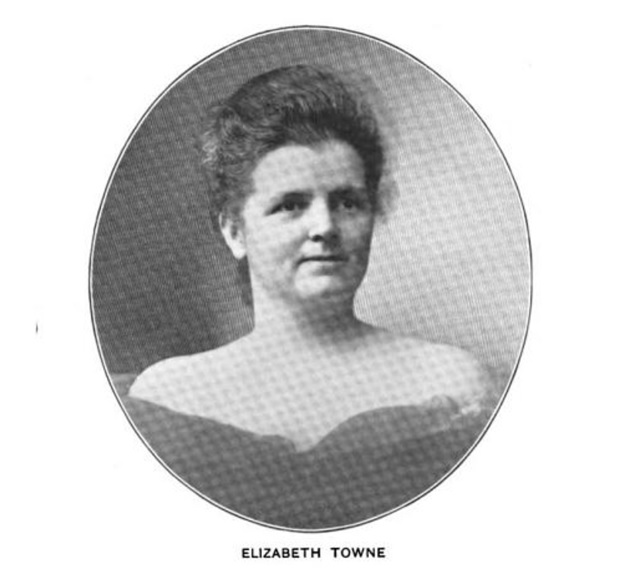 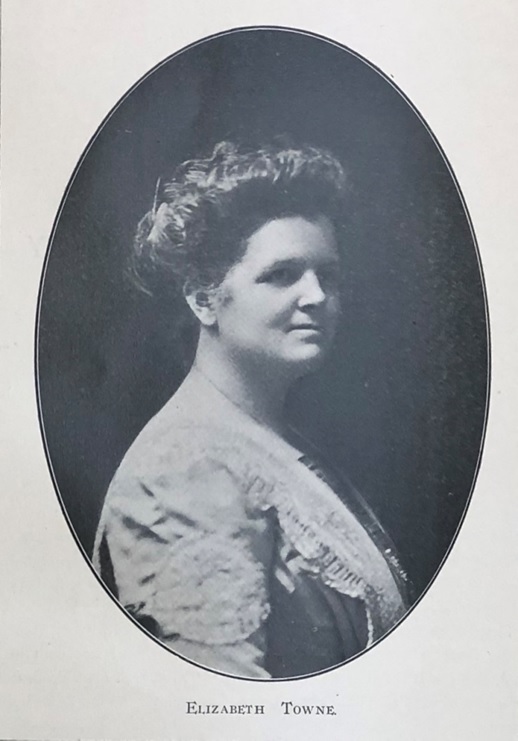 Dwight, Minnie Ryan. "Elizabeth Towne--Great Figure in one of Holyoke's Great Eras." Article originally published in the 1950's in the Holyoke Transcript-Telegram, republished in the same newspaper on the day of Towne's death, June 1, 1960.

Gover, Tzivia. Learning in Mrs. Towne's House: A Teacher, Her Students, and the Woman Who Inspired Them (Leveller's Press, 2011).