Minnie Ryan was born on June 22, 1873, in Hadley, Massachusetts, on the farm of her parents, Patrick and Katherine Ryan, who were immigrants from Ireland. In 1891, after graduating from the Hopkins Academy in Hadley and teaching school for two years, she took a job as a reporter for The Holyoke Daily Transcript, the leading daily newspaper of Holyoke, Massachusetts. Holyoke, the world's leading paper manufacturing center at the time, would claim, by the beginning of the twentieth century, more millionaires per capita than any other town in the United States. That wealth resulted from the labor of workers whose living conditions were among the worst in the country.

In 1896, five years after joining the Holyoke Daily Transcript, Minnie Ryan married William G. Dwight, the editor/publisher of the paper. While raising three children (Helen, Laura and William), she continued to work for the paper, which would be renamed the Holyoke Transcript-Telegram in 1926. When her husband died in 1930 she took over as editor/publisher, positions she continued to hold until her death on July 31, 1957, at the age of 84. She was the third woman to be admitted to the American Society of Newspaper Editors. At the time of her death, moreover, she was the oldest newspaper editor/publisher in the United States.

Minnie Ryan Dwight was one of Holyoke's leading progressive era reformers, making major contributions in the areas of public health, child welfare, senior welfare, and woman suffrage. In 1906, she became a founding member of the Holyoke Association for the Prevention and Relief of Tuberculosis, which sponsored a free clinic and a public health educational campaign. In 1908, after the state of Massachusetts presented its municipalities with its civic playground referendum, Mrs. Dwight became a founding member of the Holyoke Civic Improvement Association, and her newspaper campaign supporting the playground referendum played a major role in bringing it to a successful vote in Holyoke. Her arguments echoed those of other progressive reformers: working class children and youths needed fresh air, space to exercise, and supervised outdoor physical activities to keep them out of trouble. In response to the referendum, the city funded three new playgrounds in its most densely populated working class neighborhoods. To assure proper management of the playgrounds and well-organized outdoor programming for the city's children, the mayor appointed a Playground Commission, of which Mrs. Dwight was a founding member, and upon which she remained for eighteen years. Through her role on the Commission, and again, through the influence of the newspaper, Dwight was instrumental in the creation of the city's first public swimming pools and in assuring that girls, as well as boys, were taught to swim and to play other outdoor sports.

In 1911, Dwight drew on the reform ideas of socialist John Spargo, advocating for the establishment, in Holyoke, of New England's first municipally funded Milk Station, which provided parents of newborns with affordable pasteurized milk. Under the supervision of the Holyoke Infant Hygiene Association -- of which Mrs. Dwight was, again, a founding member - the Milk Station played a major role in radically reducing the city's infant mortality rate. Mrs. Dwight continued to serve on the board of the Infant Hygiene Association and of its successor, the Child Welfare Department, for twenty years.

Dwight was also a member of the women's club that sponsored the creation of the Holyoke Home for Aged People, which opened its doors in 1911, thereby providing seniors of relatively modest means who had no familial caretakers with their first attractive alternative to the city's public poor farm. The women who founded the Home -- including Mrs. Dwight -- continued to serve as its board of managers for many years. The rich cultural offerings of the Home and its attractive architecture - designed by Holyoke's leading architect, James Clough - soon attracted local and regional residents from a broad range of backgrounds. Dwight's additional contributions to the public welfare of Holyoke included serving as a director of the YWCA and helping to organize the local chapter of the Girl Scouts. She was also a charter member of the Holyoke Business and Professional Women's Club.

Dwight's involvement with the Woman Suffrage Movement began around 1913, when Holyoke's Equal Suffrage League reorganized and revitalized itself in anticipation of the state woman suffrage referendum, which was put to a vote in November, 1915. In May, 1914, Mr. and Mrs. Dwight, along with several other suffragists from Holyoke, participated in a large suffrage march in Boston. Mrs. Dwight returned to Boston with her two daughters on October 16, 1915 to participate in the 10,000-strong suffrage march there. In late June, 1914, she, along with Nellie Boland (LINK to sketch) and Elizabeth Towne (link to sketch), was elected to serve as a vice president of the Holyoke Equal Suffrage League.

In July, 1915, Dwight offered space at the offices of the Holyoke Daily Transcript to serve as headquarters for the League's final push for the November vote. And on September 16, 1915, six weeks before the vote, she published a Special Suffrage Edition of the paper (link). It was a major publishing accomplishment. Dwight and her co-editors from the Holyoke Equal Suffrage League successfully solicited original contributions from national, state, and local suffrage leaders, including Reverend Antoinette Brown Blackwell, who was 90 at the time (), and Harriet Stanton Blatch (link). Original columns by national, state, and local labor leaders, including Samuel Gompers, President of the American Federation of Labor, and Margaret Drier Robins, National President of the Women's Trade Union League, appealed to Holyoke's large laboring class. A report on suffragists' experiences at the Middleton County Fair offered assurance that suffrage goals and rural lifestyles and values were compatible. Contributions by Protestant, Catholic and Jewish leaders -- both male and female, in all three cases - and by a number of Holyoke's leading business, educational, professional and political leaders appealed to the community's broad range of immigrant and native-born inhabitants. And columns by the governors of every state that had already granted full suffrage to women conveyed the message that woman suffrage was good for democracy. The supplement also highlighted the racial and economic diversity of the suffrage movement and its advertisers devised clever ways to sell their products while endorsing woman suffrage.

The voters of Massachusetts rejected the nineteenth amendment in November 1915, but Dwight was hardly daunted. In the next few years she gave speeches at suffrage meetings in Boston and Springfield and she spoke in behalf of suffrage at the annual convention of the National Dairy Association. In 1915, 1916 and 1917 she served on the Massachusetts delegation to the annual convention of the National American Woman Suffrage Association (NAWSA), and in 1916 she participated in a suffrage delegation to the Republican National Convention. In 1919 Dwight was elected to serve as councilor for the 8th district of Massachusetts' Woman Suffrage League. Through her statewide suffrage activities Dwight became a lifelong friend of Alice Stone Blackweell (link), about whom she wrote a fond memorial article after Blackwell's death in March, 1950.

Even before women gained the vote Dwight became involved in national politics, as a delegate to the Progressive Party's national convention in 1916. After women gained the vote in 1920, Dwight served as a delegate to the state Republican Party conventions from 1920-1934, and in 1928 she served as an at-large Massachusetts delegate to the Republican National Convention. In 1923, governor Channing H. Cox appointed Dwight as the only woman and the only resident of Western Massachusetts to serve on the five-member Massachusetts Commission on Pensions. With her deciding vote, the commission recommended a non-contributory state-funded pension program for individuals over 70, and she continued to advocate for that recommendation until 1929 when the state legislature finally passed the Old Age Assistance Act. In 1941 Dwight again rose to statewide service, when Governor Leverett Saltonstall appointed her to the Massachusetts Committee on National Defense.

Dwight also played a major role in women's higher education. In 1923 Kenyon Leech Butterfield, the president of Massachusetts Agricultural College (the precursor of the University of Massachusetts at Amherst) asked Dwight to join the President's Advisory Council on the Status of Women; she continued to serve on the Council until her death in 1957. In 1947, the year in which the University of Massachusetts assumed its present name, Dwight was honored as its first female recipient of an honorary doctoral degree; two years after her death, a woman's dormitory there was named in her honor. Dwight was also an avid supporter of the women of Mount Holyoke College, for whom she provided journalism opportunities at the Holyoke Transcript-Telegram On the occasion of Mrs. Dwight's 80th birthday, moreover, her colleagues at the Transcript-Telegram endowed the Minnie Ryan Dwight journalism prize at Mount Holyoke.

Dwight remained involved in the welfare of her city until the day before her death, when she attended a meeting of local citizens who were concerned about the route that a new highway would take through the city. After her death, the office of the Holyoke Transcript-Telegram was flooded with tributes from major dignitaries and a tribute to her was read into the record of the state senate. Her son, William Dwight, succeeded her as publisher of the paper. 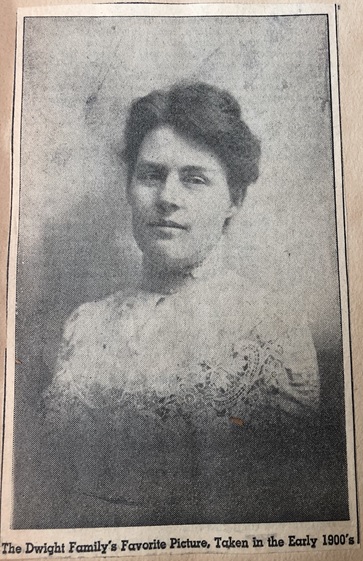 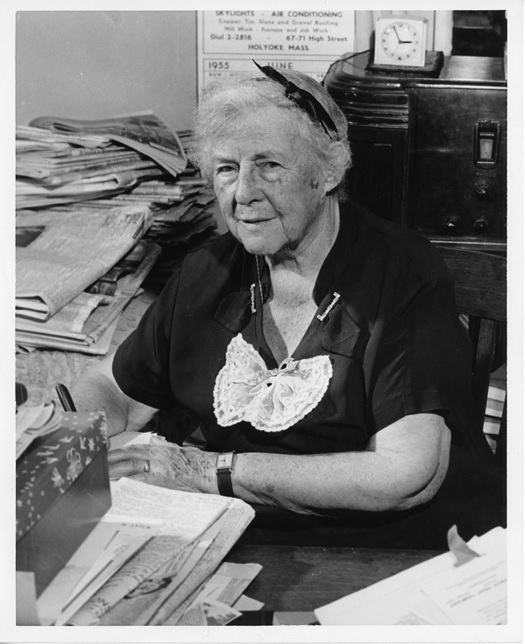 "Big Suffrage Day: Thousands in Parade in Boston Demonstration Reviewed at State-House By Governor and Dignitaries." Springfield Republican, May 7, 1914, p. 4.

The Handbook of the National American Woman Suffrage Association and Proceedings of the Forty-Seventh Annual Convention Held at Washington, D.C. December 14-19, 1915. p. 130.

The Handbook of the National American Woman Suffrage Association and Proceedings of the Forty-Eighth Annual Convention Held at Atlantic City, N.J., 1916. p. 211.

The Handbook of the National American Woman Suffrage Association and Proceedings of the Forty-Ninth Annual Convention Held in Washington, D.C. December 12-15 (Inclusive), 1917. p. 240.

"Holyoke Pioneered in Playground Development Back in 1910." Holyoke Transcript-Telegram, June 24, 1949.

Peterson, Sarah Jo. "Voting for Play: the Democratic Potential of Progressive Era Playgrounds." The Journal of the Gilded Age and Progressive Era 3/2(April, 2004): 145-175.