Nellie Boland was born in 1874 in Dingle, County Kerry, Ireland. After the death of both her parents she immigrated as a young child to the U.S. to take up residence with an aunt. By the time she reached adulthood she was working for the George C. Gill Paper Company in Holyoke, Massachusetts, which was known as "the Paper City" because of its leading role in U.S. production of fine writing paper.

Boland first gained public attention in June,1903, when, at the age of 28, she led a strike of 500 "cutter girls" from 33 of Holyoke's paper mills. The women struck because the male laborers of the mills had received wage increases while the women had not. "We women members of the Papermakers' Union," Boland asserted in a statement quoted by the Boston Post, "are determined to continue our insistence on a daily wage that will allow us a moderate recompense for hard, trying, intelligent, skilled labor, and $1.25 a day is the only minimum for which we will work." The men of the local paper union -- Eagle Lodge Number 1 -- initially refused to hear the women's complaints, but they eventually came around, and some 3000-3500 mill workers joined the striking women. Both the strike and its leader attracted national attention. After six weeks, however, the strike ended in failure, and the resources of the local Eagle Lodge were so depleted that it remained virtually non-existent until 1912, when yet another woman's strike -- again led by Boland -- re-animated the union movement in Holyoke's paper mills.

In the immediate aftermath of the 1903 strike, Boland was allowed to return to her position in George C. Gill paper mill. Within a few years, however, she lost her mill job, probably due to union organizing, but she never lost the confidence of the mill women. Thus, when representatives of the Women's Trade Union League (WTUL) came to Holyoke in 1912 in order to provide support for a strike among the "plater girls" of the paper mills, they were pointed in the direction of a local hotel, where Boland was working as a pastry chef. Efficiency measures, which had led to teams of three plater girls being replaced by teams of two (with no augmentation in wages) had provided the immediate impetus for the strike, but the women also demanded a reduction in the length of their work day from eleven hours to eight hours. Placed on the WTUL's payroll for a year, Boland not only brought the plater girls' strike to a successful conclusion, but also organized successful strikes in the paper mills of nearby Agawam and Huntington, where she overcame linguistic and cultural differences, working primarily with first-generation Italian and Polish immigrants.

In 1913, after her tenure with the Women's Trade Union League ended, Boland became the organizer and manager of Holyoke High School's first lunch cafeteria. She would continue to work in that capacity until her retirement in 1942, earning, along the way, the enduring affection of the students. Her skills as both manager and cook in the cafeteria led to an appointment to the vocational training program advisory board of Holyoke, and they may well have played a role in her appointment as a special police officer for the city of Holyoke.

It was also in 1913 that Boland's political activism shifted from union organizing to public advocacy for woman suffrage; the leadership of the Women's Trade Union League -- which had advocated for woman suffrage since its foundation in 1903 -- may well have played a role in encouraging that transition. In February of 1913 Boland was invited to speak at a hearing on woman suffrage at the Massachusetts State House; she shared the docket there with several leading public figures, including Louis Brandeis, who would later be appointed to the United States Supreme Court. In June, 1914, she was elected to the board of the Holyoke Equal Suffrage League -- whose leadership consisted primarily of the wives and daughters of some of the most prominent business and professional men in Holyoke. Throughout that year and the next, Boland gave suffrage talks in Holyoke, Springfield, and Northampton, always emphasizing working women's perspective. According to Katherine Shine, the president of the Holyoke Equal Suffrage League, Boland "obtained the signatures of hundreds of voters, and her work with the labor unions has been most successful." In September, 1915, around six weeks before the nineteenth amendment came before Massachusetts voters for the first time, Boland wrote an article on laboring women's need for self-representation for a Special Suffrage Edition of the Holyoke Daily Transcript, published by Minnie Ryan Dwight (link to forthcoming article on Dwight):

"I believe in woman suffrage and work for it because when women have the ballot, conditions under which they work in factories will be better. So too the kitchen conditions in hotels and restaurants will be much better.

I believe mothers will not have to work so hard and the coming generation will be much stronger, because the mothers of so many of them will not be worn out by hard labor.

I believe in equal pay for equal work and feel that women will have it when they vote."

In 1917, Boland -- along with newspaper publisher Minnie Ryan Dwight (link to forthcoming article) and magazine publisher Elizabeth Towne (link to forthcoming article), who were also from Holyoke -- served as a member of the Massachusetts delegation to the 49th annual convention of the National American Woman Suffrage Association. Also in 1917, after several years of advocating for women citizens' need for suffrage, Boland herself finally became a naturalized U.S. citizen.

After women gained the vote in 1920, Boland became Holyoke's first woman to hold public office -- as a representative to the statewide convention of the Democratic Party. There, she garnered media attention as the only woman delegate to support the unsuccessful Niland plank supporting the independence of Ireland and Egypt from British rule and of Korea from Japanese rule. Boland had already informed the platform committee that she feared the Democratic Party would lose Holyoke's vote if the party failed to support Irish self-rule. On the convention floor itself, she linked her own contributions to the recent war effort to her belief in freedom for small nations like Ireland: "Miss Nellie Boland of Holyoke replied that when she nursed sick and wounded soldiers, worked for the Red Cross and bought Liberty Bonds [during World War I] she thought she was doing it not only to preserve the independence of America but also that small nations might be free."

In 1924, at the age of 50, Boland married for the first time. Her husband, George F. Fitzgerald, was a member of the Holyoke School Board and a city alderman representing Holyoke's Fourth Ward. When she died, at age 70, in 1944, her funeral was attended by the mayor of Holyoke, the Superintendent of Holyoke Schools, the Principal of Holyoke High School, several teachers from the High School, and one of her colleagues on the Whiting Street Fund Commission. Her husband had pre-deceased her. 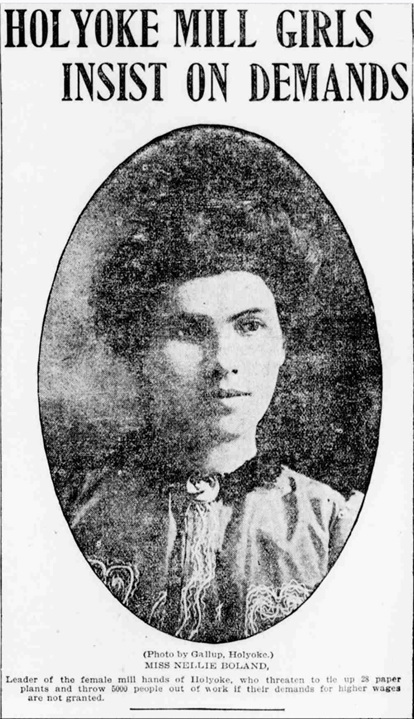 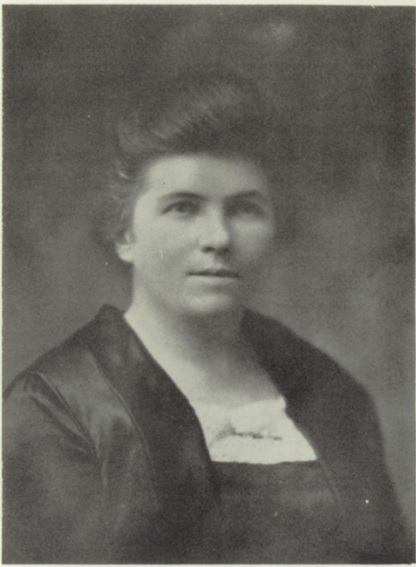 The Handbook of the National American Woman Suffrage Association and Proceedings of the Forty-Ninth Annual Convention Held in Washington, D.C. December 12-15 (Inclusive), 1917, p. 240.