Emma Estelle Barstow was born in North Yarmouth, ME on the 7th of February, 1851 to parents Hatherly Barstow and Phebe Gray (Loring) Barstow. She was the oldest of five siblings, followed by sisters Arabelle Gray (Barstow) Dowst, Florence S Barstow, Harriett Loring (Barstow) Hamilton and brother Charles H Barstow. Her sister Florence (1857-1862) passed away while Emma was still young. The 1870 census shows Emma, age 19, lived with her parents and siblings in Westbrook.

Emma married her husband Edward W. Knight on December 16, 1872 in Deering Town, ME at the age of twenty-one. She went on to have four children, Willard W. Knight, Frederic Hatherly Knight, Annie Florence (Knight) Bisbee, and Harriet Eliza Knight.

As the suffrage movement grew in popularity, Emma became involved in the work at the local level. She offered a reading at a public meeting of The District Templars of Cumberland County.

In 1895, she attended the proceedings of the 37th session of the Independent Order of Good Templars, held in Boston, MA. Later, at a special session of the International Supreme Lodge, held in Lewiston, ME on April 25, 1895, Emma, then a resident of Deering, ME, received a special degree from the organization, which was conferred by Dr. D. H. Mann, RWGT.

Emma steadily grew her role in local suffrage politics and in 1905 was an Auditor of the Maine Woman Suffrage Association (MWSA).

Emma attended the Thirty-Second Annual Convention of the Maine Woman's Christian Temperance Union, which took place in the Town Hall in Dexter on

September 19 through 21 1906. She offered a prayer in the session after it was called to order. During the Executive Committee, an initiative was approved that authorized Emma to print posters, which would advertise the address of Miss Alfreda Brewster, who was recently employed as the state organizer.

As her involvement grew, Emma sought opportunities to get involved in the suffrage and temperance movement beyond the state of Maine. She began to pursue opportunities that would move her activism to the national level. In 1905, she was selected by a committee to serve as a delegate to the National Convention in Hartford, CT on behalf of the Woman's Christian Temperance Union of Maine. She was also elected to the state office to service as a Vice President, Cumberland County for the 1906-1907 term.

Emma was probably the "Mrs. Edward Knight" who was Recording Secretary of the Portland Equal Suffrage Club of 1908-09 and was also auditor of MWSA in 1907.

In 1907, Emma Knight attended the Thirty-Third annual Convention of the Maine Woman's Christian Temperance Union. The event took place at the Main Street Free Baptist Church in Lewiston. Emma was appointed a teller at a session, which enabled her to vote for president of the association. Alongside the other tellers present, Emma voted to elect Mrs. Lillian M. N. Stevens as president.

She continued her role as an auditor of the Maine Woman Suffrage Association in 1907 and that year participated in the MWSA annual convention in Farmington.

She passed away on September 25th, 1926 at the age of 75. She was laid to rest in Evergreen Cemetery in Portland, Maine alongside her husband, who passed away two years prior to her death.

Memorial: Genealogical, Historical, and Biographical, of Solomon Leonard, 1637, Duxbury and Bridgewater, Massachusetts, and some of His Descendants. By Manning Leonard, Southbridge, Mass. Press of Knapp, Peck & Thomson, Auburn N.Y. 1896, p235. 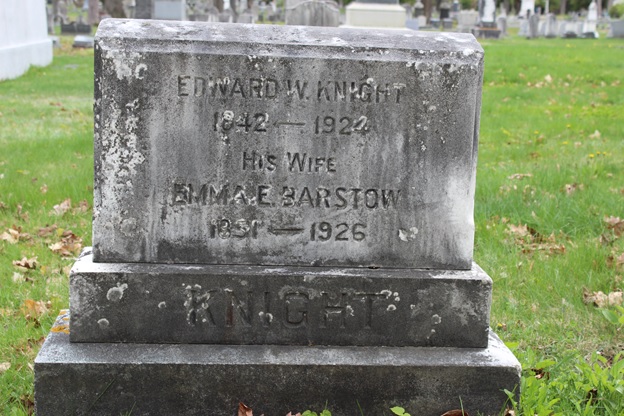 The gravestone of Emma E. Knight and her husband, Edward, in the Evergreen Cemetery of Portland, ME (Find a Grave: https://www.findagrave.com/memorial/118591147/emma-estelle-knight)