Alma Louise Sabourin was born November 27, 1873 in Lafourche Parish, Louisiana (probably in the town of Thibodaux). Her parents were Charles Sabourin, a dentist originally from Canada, and Louisiana Thompson, daughter of a prominent local merchant. Shortly before her sixth birthday she lost both her father and maternal grandfather, likely to the yellow fever epidemic of 1878. Her mother Louisiana, a young widow, moved the family at least briefly to the house of her mother Eliza, also recently widowed. There Alma would have grown up with her younger brothers as well as several aunts and uncles who were only a few years her senior. As a child she and other young members of the Sabourin/Thompson family participated in local festivals and ceremonies, sometimes singing or performing as part of a choir.

Sometime in the first decade of the twentieth century, Alma moved to Baton Rouge where she worked as a music teacher, a profession she learned from her mother.

Alma helped organize the State Equal Suffrage League in March 1913. Over the next few years she spent time in New Orleans as well as Baton Rouge, where she acted as the president of the Orleans Parish Branch of the Woman Suffrage Party. In 1917 she, along with many other Louisiana ladies involved in the suffrage movement, attended "suffrage school" in Baton Rouge.

At the same time she was active in the suffrage movement, Alma was also an active member in the local chapter of the Woman's Christian Temperance Union, the Louisiana Music Teachers' Association, and the War Savings Society.

It is not known whether Alma continued to pursue political activism after women won the right to vote with the passage of the Nineteenth Amendment. She continued to teach music in Baton Rouge and clerked for the state auditor. She passed away in 1966.

The weekly Thibodaux sentinel and journal of the 8th senatorial district (Thibodaux, La.) 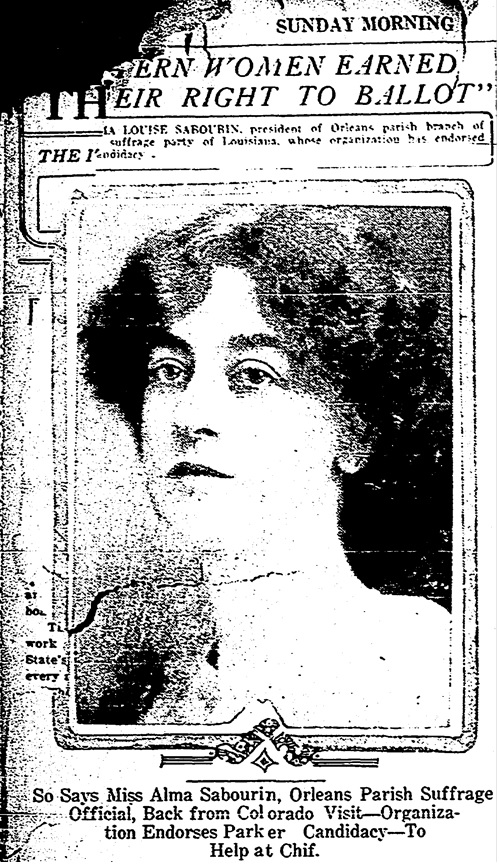