The first of Abraham and Mary's five children, Nellie was born on December 7, 1836 in Frederick, Maryland as Penelope Annie Margaretta Blessing. A talented writer from childhood, she attended Barleywood Seminary and also had various tutors - with David A. Eyster, her future husband, as one of them. Smitten, the couple married in 1853 and had two children, Mary and Charles.

During her time on the East Coast, Nellie raised funds from legislative members for Washington D.C. to purchase Mt. Vernon, penned various short stories and autobiographies like "A Day Among Quakers" later featured in Harper's Magazine, and became an officer of the Great Sanitary Commission when the American Civil War broke out. Shortly after the war ended, she published her children's book series, "Sunny Hour Library" from 1865 to 1869. With her upbringing as a member of the English Lutheran Church, Nellie would later become involved with the Christian community in San Jose after her move from Pennsylvania to California in 1876. Recovering from an episode of depression, brought on by her son and mother's untimely deaths, she channeled her energy into teaching at the Home Seminary, Young Ladies Athenaeum, and Chinese Missionary Schools; this was where her career as a social activist began.

Plunging into various philanthropic works through which she could empower women, Nellie was heavily involved in the Woman's Christian Temperance Union, which was a strong ally of the Northern Californian suffrage movement; after her term as the State Superintendent of the WCTU's Juvenile Department, she was elected as the WCTU's Californian Chapter President. As an active member of the Women's Press Association of the Pacific Coast, she became its first President and represented this organization at the World's Columbian Exposition of 1893 in Chicago. She also became president of the San Jose Ladies Benevolent Society, California Women's Indian Association, and League of American Pen Pal Women- as well as the Secretary of the Women's Missionary Society of the Presbyterian Church.

While there is little documentation of her involvement in the suffrage movement, there is no doubt that Nellie was supportive of women's right to vote because she spoke at the Woman's Congress Auxiliary with known activists Elizabeth Oakes Smith and Sarah B. Cooper, and later became treasurer for the Political Equality Club at Berkeley- one of the most prominent West Coast suffrage organizations that was frequented by those like Mary McHenry Keith. In addition, she contributed to numerous newspapers like the Woman's Tribune and Woman's Exponent, documenting the activities of the State Woman Suffrage Association, Equal Rights League of San Francisco, and Religious, Women's Suffrage, Temperance, Christian Science, and Equal Rights Congresses. By the time she passed away on February 21, 1922 in Alameda, Nellie Blessing Eyster was known as a brilliant writer, philanthropist, and social activist whose involvement in various organizations allowed her to better the lives of other women. 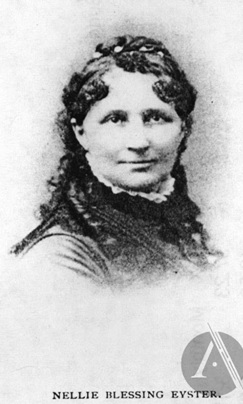 "UC Women and the Suffrage Movement in the Nineteenth Century," 150 Years of Women at Berkeley Website, August 30, 2020, https://150w.berkeley.edu/suffrage.