Florence Jackson was born in Baton Rouge, Louisiana around 1863, the daughter of Thomas Jackson and Fannie Wright Jackson and also notably, the grandniece of former U.S. President Andrew Jackson. In her early years, Florence was educated by her mother before attending Rutgers Female College, which was New Jersey's first institution of higher learning for women. She then studied in Paris, traveled to Cuba and Argentina, where she lived for a number of years, learning the language and customs that would stimulate her writing later in life. Florence returned home in 1885 and married Edward Learned Stoddard of Pittsfield, Massachusetts. In 1891 Stoddard worked on the newspaper Review of the River Plata and went on to work on The Arrow.

The earliest record of Mrs. Stoddard's involvement in women's suffrage was her recognition at the National American Woman Suffrage Association Convention of 1893 where she was responsible for recruitment in California. After her work in California, Stoddard continued her journey of teaching as noted by her participation in the Board of Education's Course of Free Lectures to the People program which allowed her to travel through Brazil, Guinea, Chile, and Argentina, the Argentine Republic, Bolivia, and Peru. Upon her return to New York in 1897, Stoddard worked for the New York Tribune.

The majority of Stoddard's early political action occurred in San Francisco which anticipated the work she would later accomplish in Washington D.C. She returned to the West Coast where, in 1902, she was recognized as an organizer for the National American Woman Suffrage Association. In this period in San Francisco she worked as Editor of the Overland Monthly. It was also in this year that she was noted for her extensive work for the suffrage movement in California by the History of Woman Suffrage. Her early feminism emerges in "How to Do Without Servants," published in Sunset Magazine in 1903, where she breaks down the domestic labor of women and the determination of will power that could aptly suit life outside the home if only the balance of power were more equitable.

Her life of world travel and educational endeavors is apparent in her book, As Old as the Moon, which was published in 1909. The acclaim Stoddard received for this particular book would lead her to become a well-known author. She would go on to write one more book, adding to her repertoire of short stories and articles published throughout the years. In 1921 Stoddard's background in writing led to her presence on the judges' panel at the Writers' League of Washington Poetry Contest. The former League president was acting president of the International Association of Arts and Letters at the time. Stoddard's legacy is best summarized in a D.C. monthly, The Cotton Oil Press, in 1921, which is the period in which her activism in women's liberation began to decline. Still, she was one of the most prominent women in New York., known for her elegance, refinement, and ability to command a social gathering. Stoddard filled her later years with participation in such organizations as The Ana Shaw League of Brooklyn as well as the alumnae association of Rutgers until she passed away on July 19, 1947. 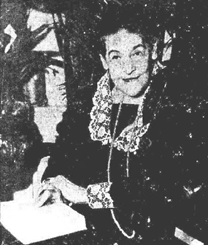 Annual Report of the Supervisor of Lectures to the Board of Education. (1894). United States: (n.p.). Retrieved March, 2020 on Google Books.

Woman's Who's Who of America: A Biographical Dictionary of Contemporary Women of the United States and Canada, 1914-1915, Volume R-V, edited by John William Leonard, 42-130. [LINK to Stoddard bio sketch].