Lillian Cawthra Worrall (1884-1979) was an American suffragist, social activist, and author. She served in leadership positions in Connecticut state chapters of the National American Woman Suffrage Association (NAWSA), the League of Women Voters, the National Consumers League, the General Federation of Women's Clubs, and other organizations.

Lillian Worrall's activism in the women's suffrage movement made the newspapers in February 1917, when the Rochester Democrat and Chronicle reported that Worrall had won a national award from Michigan's Wayne County Suffrage League for a suffrage scenario entitled Conscience, filmed on four reels and first screened in Detroit.

Worrall moved to Meriden, Connecticut, around 1918 and quickly achieved prominence in the Connecticut Woman Suffrage Association (CWSA), an affiliate of the National American Woman Suffrage Association (NASWA). On March 11, 1919, she was among one hundred women who marched from the CWSA's headquarters on Hartford's Pratt Street to the State Capitol, carrying the signatures of 97,000 Connecticut women seeking the right to vote. In September 1920, Connecticut became the thirty-seventh state to ratify the Nineteenth Amendment to the US Constitution, which guaranteed women the right to vote. Although the CWSA dissolved in 1921, Worrall remained active in women's organizations and Connecticut state politics. She was a longtime member of the Republican Party, participating in the party's nominating caucus in Meriden in October 1920 and serving as a delegate to the national convention in 1928.

Worrall was active in the Connecticut League of Women Voters during the 1920s and 1930s, chairing the League's legislative committee in 1929 and the Committee on the Legal Status of Women from 1930-1933. She focused on ensuring equal opportunity for women to serve on juries. In March 1930, Worrall organized a one-day "citizenship school" for women on the issue of jury service, held at the Hartford YMCA. She directed a dramatic sketch, "Ladies, It Is Coming," illustrating legal procedures for the League's November 1930 convention. She wrote a letter to the editor of the Hartford Courant, printed on March 6, 1931, in which she criticized the Courant for an editorial dismissive of women's desire to serve on juries. On June 1, 1932, Worrall hosted delegates from all 58 local chapters at her house at 24 Cottage Street in Meriden, where delegates planned to lobby the legislature to support jury service for women.

Worrall's name is featured on a bronze tablet in the Connecticut State Capitol, which memorializes 31 "Connecticut women who helped win the vote for the women of their country." The Connecticut League of Women Voters presented the tablet to the state on October 24, 1934 at the close of the League's annual convention. Isabel Beecher Hooker, nine-year-old great-granddaughter of renowned Connecticut suffragist Isabella Beecher Hooker, unveiled the tablet. Governor Wilbur Cross delivered the acceptance speech. Worrall was one of nine women named on the plaque to attend the luncheon as guests of honor. The tablet is mounted on a pillar on the ground floor inside the capitol building's south entrance. 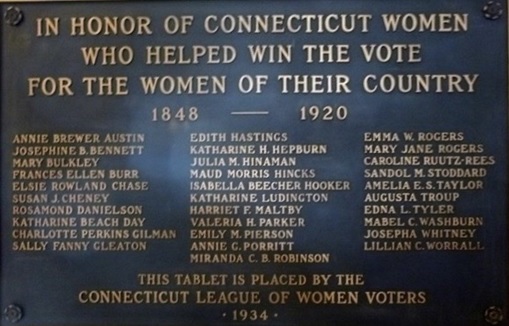 In June 1933, Worrall ran on the "dry" candidate slate for delegates-at-large to the Connecticut state convention to ratify the Twenty-first Amendment to the US Constitution, which repealed Prohibition. The anti-repeal slate lost resoundingly, garnering only 15% of the vote in a special election on June 20. Connecticut ratified the constitutional amendment on July 11, 1933.

Concurrent with her work in women's organizations, Worrall served as a director-at-large of the Consumers League of Connecticut in 1935, 1937, and 1939. In addition to demanding safe and reliable consumer goods, the National Consumers League advocated for workers' rights, better working conditions, equal pay for women, and other reforms.

In addition to her political activism, Worrall held leadership positions in the Connecticut State Federation of Women's Clubs. In 1921, she hosted a roundtable discussion on legislative issues at the Federation's annual meeting. Worrall delivered the keynote, on the topic of "Men Versus Women on the Jury," at the Federated Women's Clubs of Tolland County meeting on November 7, 1939. She co-chaired the state federation's legislation committee in 1939 and chaired the legislative committee of the Federated Women's Clubs of New Haven County in 1940. She was reappointed chair of the state federation's legislation committee in May 1941, serving at least through May 1943. After 1943, she was no longer reported in the annals of activism.

Later in life, Worrall tapped into her creative side. Under her birth name of Lillian Cawthra, she wrote for radio and authored several plays, including The Great Romantic: A Play in Three Acts (about the life of nineteenth-century French novelist Victor Hugo) and Marriage Can't Happen in Heaven: A Comedy in Four Acts, circa 1946. Her action-romance novel Lure of the West (New York: Vantage Press, 1954) featured a trio of cowboys adventuring through the Wild West.

In 1939, Lillian Worrall separated from William F. Worrall, her husband of 32 years. She divorced him on grounds of cruelty in 1942, receiving $900 in annual alimony. After the divorce, Lillian moved to Florida and then to Freeport, Long Island. In 1956, she married designer and art consultant Henry Stilwell Clapp of Brooklyn Heights, New York, and adopted her new husband's surname, becoming Lillian Cawthra Clapp. She died in East Haddam, Connecticut, on February 11, 1979 at the age of 95. According to the Town of East Haddam, her remains were cremated and no place of burial recorded. Henry Clapp died in 1980.

Lillian's first husband was William Frederick Worrall (1882-1946). Born in Denver, Colorado on May 9, 1882, Worrall was raised in Rochester, New York. During the 1920s and 1930s, he worked as Supervisor of Factory Accounting for the International Silver Company in Meriden. He served as president of the Hartford chapter of the National Association of Cost Accountants in 1925 and president of the Meriden Rotary Club in 1939. On separating from his wife, he retired and moved to Kansas City, Missouri, in 1940 and then to Tucson, Arizona, in 1942. He married Mary Leone-Frances Garrett of Tucson in 1943. He died in Tucson of a heart attack on May 1, 1946.

Lillian and Frederick Worrall had one child, a daughter, Dona Celeste Worrall, born in Rochester, circa 1909. Dona Worrall earned her Bachelor of Arts degree from Smith College and pursued postgraduate studies at the University of Edinburgh. She married Rhodes Scholar Wallace Cable Brown in September 1932 and earned a Master of Arts degree from the University of Michigan in 1934. She subsequently taught at the Barstow School in Kansas City, where her husband was a professor of English at the University of Missouri. With her husband, she authored several books and articles on literary topics, including Form in Modern English, published by Oxford University Press in 1958. Dona Worrall Brown died July 3, 1996, in Norwich, Connecticut.

"League of Women Voters to Debate Service on Juries: Citizenship School Will Be Held Thursday at Y. W. C. A." Hartford Courant, March 19, 1930.

"Mild Suffragists Scorn Prison Army: Have Nothing to Do with Militants, Says Statement from Pratt Street-Planning March on Legislators Today: Procession of Connecticut Association Will Take Signatures of 97,000 Women." Hartford Courant, March 11, 1919.

"Plans to Be Laid for Women Jury Service Campaign: Voters' League Committee to Meet in Meriden on Wednesday." Hartford Courant, May 31, 132.