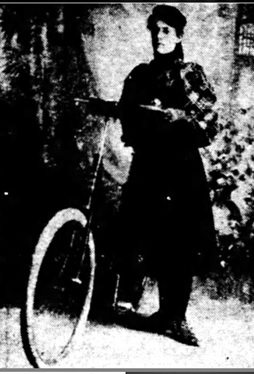 Gertrude Beatrice Hughes was born in Meadville, Pennsylvania on July 7, 1870, to Louis Cameron Hughes and Elizabeth Josephine Brawley Hughes. The son of Welsh parents, Gertrude's father enlisted as a private in the United States Army during the Civil War, earned a law degree, and moved to Arizona in the 1870s, believing the climate would be therapeutic for his ailing war wounds. There he held several local and state offices and established the Arizona Daily Star newspaper before being appointed territorial governor of Arizona by President Grover Cleveland in 1893.

Gertrude's mother, known as Josephine, was a graduate of Edinboro State Normal School in Pennsylvania and taught there for two years. After relocating to Arizona with her husband, she founded a school for girls in 1873 and served as its first teacher; founded the Woman's Christian Temperance Union of Arizona and served as president of the organization; and co-founded the Arizona Suffrage Association in 1891. (LINK to her bio sketch - Josephine Brawley Hughes.) Gertrude had one brother, John Brawley Hughes, born in 1873; John became a senator and was called "the suffrage knight of Arizona" for his active support of woman suffrage.

According to a 1913 biography of Gertrude in Arizona: The Youngest State, Gertrude came "from in a home where the deepest interest was felt in all the vital problems and questions of the day." She attended St. Joseph's Academy in Tucson; Snell's Seminary for Young Ladies in Oakland, California; Linden Hall Seminary in Lititz, Pennsylvania; and the New England Conservatory of Music in Boston. Around 1894, she returned to Tucson, where she caused a scandal by riding a bicycle on the streets of the city while wearing a bicycling costume with trousers. She became a professor of elocution, voice, and English at the Territorial University of Arizona, the first woman appointed to the faculty there.

On March 17, 1897, Gertrude married Sherman Melville Woodward, a fellow University of Arizona professor. The couple had one biological child, Miriam Josephine, born in Arizona in 1897, and one adopted child, Ronald, born in California in 1902. Gertrude resigned her position at the university when she married. She and her mother traveled to attend "all the national" suffrage and temperance conventions, according to a 1946 profile by Rosemary Kaufman.

Around 1904, Sherman Woodward took a position with the U.S. Department of Agriculture as a hydraulic engineer, which required frequent travel throughout the country. He later accepted a faculty position at the University of Iowa, where the family was living by 1905. The 1910 census lists Gertrude living in Los Angeles with the children, while Sherman, still a professor, is listed as living alone as a boarder in Iowa. In 1911, Gertrude and the children embarked on a yearlong European tour. They returned home to Los Angeles, where Miriam embarked on a career in theater and early silent films. On February 13, 1915, Sherman filed for divorce in Johnson, Iowa, citing "desertion" as the cause. He remarried the following year.

Gertrude lived in California the rest of her life. She enjoyed attending social functions, hosting servicemen during World War II, and participating as a member of the Women's Press Club and the Society of the Prevention of Cruelty to Animals. In 1946, Kaufman wrote that "Gertrude Woodward is one of the few big women, big in heart and character, alive and living. She is a grand lady and at 77 is still fighting for reforms, ever maintaining her zest for life. Her enthusiasm is contagious to all who meet her." Gertrude died on May 10, 1956 in Los Angeles, California and was buried in Forest Lawn Memorial Park in Glendale, California.

Kaufman, Rosemary. "Gertrude Woodward: She Pioneered the West but Not in Modern Splendor." The Redondo Reflex 30 August 1946. Newspapers.com, https://www.newspapers.com/image/621319102