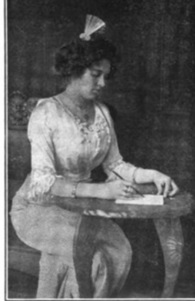 Ruth May Connor was born on February 28, 1889 in Clinton, Missouri to Colonel John P. Connor and Ella Duffer Connor. Her siblings included Emma, John, and James. Colonel Connor, born in Ohio, was a United States Army officer during the Civil War who later moved to Arizona and then to California. According to the 1913 issue of Who's Who in Arizona, he "was prominent in politics in the latter state [Missouri] and was a personal friend of many of the well known public men." Ruth attended schools in Kansas City, Missouri as well as St. Vincent's Academy in Santa Fe, New Mexico.

Ruth married Bailey Lee Nowell in Santa Fe, New Mexico, on April 12, 1904. Bailey worked as a newspaper printer and was involved with the Citizen Publishing Company in Santa Fe. The couple had two children, Elmer Bailey, born in 1906; and Dora Mae, born in 1907.

Ruth joined the Arizona suffrage movement. According to reports, she "was very active during the recent campaign for suffrage and was one of the especially hard workers for the cause in the final conflict whose efforts were effective in bringing about the desired result." She was elected secretary-treasurer of the Pima County Woman Suffrage Association on January 23, 1912 and also served as the organization's special correspondent.

By the summer of 1912, Ruth's father was living in the Los Angeles, California area. She and her children made frequent trips to visit him as his health deteriorated. Sometime in late 1912 or early 1913, the Nowell family relocated to Venice, California, where Ruth became a member of the Daughters of the American Revolution, Women's Relief Corps, and the Ladies of the Maccabees of the World. She also served as chairman of the Venice Grammar School's Parent-Teacher Association Ways and Means Committee.

Ruth died on August 3, 1957 in Los Angeles, California. She was buried in a family plot in Woodlawn Cemetery, Santa Monica.

Connors, Jo. Who's Who in Arizona Vol. 1. 1913. Google Books, https://books.google.com/books?id=LxFQAAAAYAAJ&pg=PA615&lpg=PA615&dq=%22ruth+may+nowell%22+suffrage&source=bl&ots=6v0BvH0ILQ&sig=ACfU3U1MZOmhQBJBX5tTET6cQWs7MMPBXg&hl=en&sa=X&ved=2ahUKEwjq36La0sTrAhWDtJ4KHaGiB6EQ6AEwAHoECAEQAQ#v=onepage&q=%22ruth%20may%20nowell%22%20suffrage&f=false