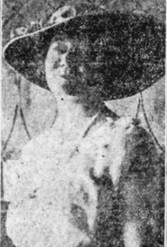 Susan V. Paul was born in Eastman, Georgia on October 1, 1853. The 1860 census lists her mother, Mary Paul, as head of the household on a farm in Jones County, Georgia with Susan and her older siblings, William, Julius, and Martha. Mary Paul died in 1865, and the 1870 census finds teenage Susan ("Susane") Paul living with John S. Stewart, his wife Mary, and their four small children in Spartanville, Georgia.

Susan married Captain George F. Cherry, a decorated Confederate veteran and widower with five children, on April 9, 1878. The couple owned a farm in Bibb County, Georgia, and George worked as a sheriff. He died on September 6, 1884 at the age of forty-nine.

Susan married again, this time to Rufus LaFayette Moore, on August 12, 1885. Susan and LaFayette, as he was known, appear to have resided in Denver, Colorado, and in Georgia before moving to Coconut Grove, Florida sometime around 1905. LaFayette worked in the lumber industry and became known as "Dry-Kiln Moore" for the lumber-drying technology he invented. It appears that the couple moved to Florida so that LaFayette could establish a Dry-Kiln lumber mill. Susan and LaFayette had no offspring, although Susan appears to have maintained relationships with George Cherry's children, who were by then grown and had families of their own.

Susan, or "Sue," as she was sometimes called in the newspapers, was quickly accepted into the Miami area social scene. She joined the Housekeepers Club (now the Woman's Club of Coconut Grove), the oldest women's social organization in Florida. The club still exists today and supports civic improvements, literacy, and the advancement of arts and culture. Susan was elected the club's president at least twice and served on its Committee on Legislation and Ways and Means Committee.

Susan was also a member of the North Dixie Chapter of the Woman's Christian Temperance Union, the Royal Palm Park Committee, the Florida chapter of the United Daughters of the Confederacy, and the Red Cross. By 1912, she was described as a "prominent society and club woman" and had her portrait published in the Atlanta Journal.

Suffrage work seems to have been nearest to Susan's heart, though. Her suffrage activism began around 1914, when she was elected the Housekeepers Club delegate to the General Federation of Women's Clubs state meeting. She began giving talks on the topic of suffrage at Housekeepers Club meetings. Her demeanor in these talks was described in the newspapers as "direct and thorough."

On May 11, 1914, several dozen women gathered at the municipal auditorium in Miami to form the Miami Equal Suffrage League. Susan attended and was elected the organization's first president. A newspaper interview of Susan after her election described her "usual spirit of ready helpfulness" and emphasized that "Mrs. Moore speaks of her literary work in newspaper fields and along other lines, which by the way have been of long standing, as if they were not one-half so important to her interest in suffrage."

By 1915, "Mrs. S.V. Moore," as she was often called in newspaper accounts, was head of "suffrage organization in her neighborhood," and organized a suffrage rally to be held at the Housekeepers Club headquarters in November of that year.

Susan was elected to represent the Miami League of the Florida Equal Suffrage Association at the Orlando conference in 1916. One newspaper account states, "Then who is going to Orlando? Mrs. Sue V. Moore of Cocoanut [sic] Grove, who has no home cares. Mrs. Moore, whose untiring and faithful work for suffrage is never interrupted by the reasons named by the householders at yesterday's meeting [sick children or husbands who objected to their wives' suffrage activism]."

In May of 1916, Susan conducted a joint meeting of the Suffrage League and Equal Franchise Department of the WCTU. She passionately urged women to contact and educate representatives and senators on the suffrage platform.

She was one of many women from Fort Lauderdale, Coconut Grove, and Miami to attend a large suffrage luncheon hosted by Mrs. William Jennings Bryan [LINK to bio sketch for Mary Baird Bryan] on January 10, 1917. Later the same year, she was elected auditor and served on the presidential nominating committee of the Florida Equal Suffrage Association. In addition, she presented an address to those gathered at the meeting; one reporter stated that "Mrs. Sue V. Moore took up the question of these two ways of gaining suffrage [either by state franchise or by national amendment], showing the course necessary to affect both, and gave a most interesting comparison of the methods by which suffrage must be obtained by the states and the practical impossibility of some state methods."

In May of 1917, Susan represented Miami at the state National Woman's Party convention and introduced the resolution endorsing the passage of a presidential suffrage bill to the Florida state legislature. According to an account in The Miami News, "Mrs. Moore is entering heart and soul into the work of the woman's party."