Mrs. Anna Ferry Smith was a labor activist, socialist and suffragist who advocated for the position of working women in a sphere of growing immigrant labor and sex prejudice. Her efforts challenged the pervasive notion that white working women were temporary members of the labor force.

There is little known about her family life. Anna was born in New York in 1833 and worked a succession of jobs in domestic service, shoe factory labor, laundry, and sewing. She was a nurse for the Union Army in Pennsylvania where she married a disabled war veteran named John Quincy Adams Smith. After her husband's death, Mrs. Smith, and their child (Samuel Ferry Smith), moved to Denver where she worked as a school janitor and was partially compensated with some education. She migrated to San Francisco in 1875 and at some point, settled in San Diego.

Smith began to frequent Chinese immigration hearings in 1876 and testified as "a general working woman." Although Smith was involved in the Workingmen's Party, she showed sensitivity to the condition of Chinese workers. However, she changed her position on this issue and ultimately prioritized reform for unemployed white women and stoked anti-Chinese sentiment.

By the 1880s, Smith had emerged as a regular public speaker in San Francisco. Smith joined street protests, most notably on February 8, 1880. In one of her signature "sandlot" speeches at the new City Hall site, she condemned the looming threats of low wages, white unemployment, prostitution, and Chinese immigration growth and argued that white women should be able to earn a living. "There are sewing women in this city who can only earn $3 per week for their tedious toil. How, then," she asked "can they be expected to live comfortably and respectably on so small a sum?" Sandlot organizers became agents for unemployed women. Some employers replaced their Chinese workers through the efforts of the Smith-led Committee on Corporations Looking into Laundries.

In the early 1890s, Smith worked with Clara Foltz in the California Nationalist clubs. Inspired by Edward Bellamy's book, Looking Backward (1888), Smith, Foltz and others were attracted to the Nationalist message of labor and female equality. In 1894, she became one of the two female generals in Coxey's Army, a nationwide march protesting unemployment and the Panic of 1893. Historian Carlos Schwantes's article on Coxey's Army describes Smith's leadership. As she and her regiment sailed up the Sacramento River in the spring, General Smith declared:

I will land my men on the steps of the Capitol at Washington. I am a San Francisco woman, a woman who has been brought up on this coast, and I'm not afraid of anything, not even hunger. I have a woman's heart and a woman's sympathy, and these lead me to do what I have done for these men, even though it may not be just what a woman is expected to do.

Her activism in the 1890s was covered by newspapers. The Examiner reported on the "most fantastic body" of California protesting in 1894, as Smith landed and marched her Oakland regiment through orchard counties. On October 5th and 6th 1895, she was arrested for street lecturing. In 1898, Smith withdrew from the Uhlich's Hall Social Democracy convention and organized a branch of the Social Democratic Party. In the same year, she traveled from Chicago through "two Kansas Citys," preaching socialism on street corners with Mother Mary G. Jones. In 1902, she ran as a socialist candidate for State Superintendent of Public Instruction.

More than [two] years ago she told me that if she could only live to see Gene Debs nominated and the campaign of last year concluded she would lay down the burden of life uncomplainingly.

Smith passed away in San Diego in December of 1908, survived by her son Samuel Ferry Smith, a prominent lawyer. A 1909 St. Louis Labor publication shared her social contributions, remembering Smith as "the good mother, the true comrade, the heroic and self-sacrificing sister." 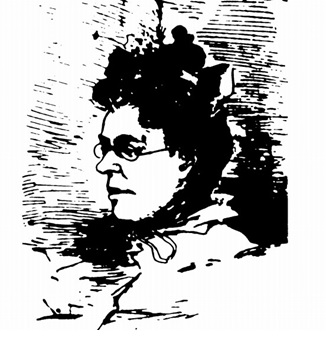 Glass, Fred. B. From Mission to Microchip: A History of the California Labor Movement. Oakland: University of California Press, 2016. http://www.jstor.com/stable/10.1525/j.ctv1xxsfk.11

"Her Hat was in the Ring," http://www.herhatwasinthering.org/biography.php?id=8447

Rodman, Willoughby. History of the Bench and Bar of Southern California. W.J. Porter, 1909.