Jennie Childers Partch was a tireless voice for progressive causes in Arizona. It is unclear what in her upbringing helped mold her into such an effective speaker, but she used that power to further reform, focusing on obtaining the vote for women, abolishing liquor consumption, and making public institutions more humane.

Jennie Childers was one of eight children born to farmers John H. and America Childers of Otter Creek, Iowa. She married a recent graduate of a Presbyterian seminary, Virgil F. Partch, in 1888, and the young couple then left for missionary work in China, where their two oldest children were born. In 1900, the Boxer Rebellion, an anti-foreign and anti-Christian uprising, sent them back to the United States and a new life in Oakland, California, where their youngest son was born. It seems that Virgil either lost his missionary zeal or else could not obtain a new mission, so he put his knowledge of Chinese language and culture to use as the Chinese inspector for the federal immigration service, monitoring activity under the Chinese Exclusion Act of 1882.

In 1909 the family of five arrived in Benson, Arizona Territory, a small community founded in 1880 when the Southern Pacific Railroad station was established to bring silver ore out of Tombstone. Although mining in Tombstone had been in decline for over twenty years when the Partches arrived, the region still fostered a wild West atmosphere. Jennie Partch, an active member of the Woman's Christian Temperance Union, told a reporter from her in-laws' town of Jewell, Kansas, that Benson and Jewel were about the same size but noted Benson "has ten saloons. That is what you Kansas folks would call a wet town."

After just a year in the territory, her speaking talents were already so well recognized that she was asked to speak on woman suffrage to the delegates writing the state's constitution. Partch told the story of a conversation between a grandmother and her grandson that was supposed to have taken place in 1960, fifty years in the future. The boy misunderstood his grandmother and thought suffrage had not been granted to women, so he asked if "he should pray for the souls of the 'constitutioners' in purgatory. No, replied the grandmother, they had granted suffrage and had gone to heaven, escaping even the smell of purgatory."

Although her talk was "the hit of the day" at the hearing, delegates failed to provide for woman suffrage in the otherwise progressive state constitution. But they included provisions for the initiative and referendum, so the leaders of the Arizona Equal Suffrage Association (AESA) organized suffrage clubs to gather the necessary signatures to place suffrage on the 1912 ballot. Suffrage leader Pauline O'Neill formed the Phoenix Civil League in the state capital, the most influential club in the state, and Jennie Partch, who moved to Phoenix with her family in 1911, became one of the league's officers and served on the central committee of AESA.

The petition campaign took place during the summer of 1912, a time when temperatures routinely soar between 100 and 110 degrees in Phoenix. Despite the difficult canvassing conditions, over one-third of the signatures from Maricopa County, the most populous county in the state, were collected through the "tireless efforts" of Jennie Partch. She organized donors as well and, as one newspaper reported, "the coffers of the state equal suffrage central committee tell the story of her success of increasing the campaign fund." That fall Partch was placed in charge of implementing a plan to move the suffrage headquarters to the state fairgrounds so that thousands of voters could be reached. Her suffrage booth featured handsome posters from the movement in England, badges and pennants left over from the recent California campaign, and she hired young boys to hand out "Votes for Women" leaflets at the train station to the voters as they departed Phoenix for the far-flung corners of Arizona.

But it was Partch's ability to provide the press with an interesting quote and her eloquence of speech that endeared her to reporters and promoted her as an important spokesperson for the suffrage movement. She spoke from the viewpoint as a mother, helping assuage concerns that politics would estrange women from their children. Whether speaking at mass meetings alongside AESA leaders Frances Willard Munds, Pauline O'Neill, and NAWSA organizer Laura Gregg Cannon, or presenting to the central committees of the Republican and Democratic parties, she assured her listeners "her children and her home are her first considerations." She told the press:

The home is the most wonderful institution in the world because it has been built by the united effort of men and women. The one looking toward the financial welfare, the other the spiritual. For comfort and understanding the child goes to his mother, his spiritual, mental and moral support; to his father for his material needs. And so it always follows, one a supplement of the other. Men have made a wonderful state, but the essential elements of a perfect state are lacking, and can only be brought about by the combined efforts of men and women. We have given the citizens to the state and it is no more than right that we should prepare the state for the citizen.

Partch also implored audiences to grant women the vote as taxpayers, a high-priority message in the new state, asking male voters to "relieve the injustice" and to "set an example to the older states which will culminate in the enfranchisement of the 8,000,000 bread-winning women."

After the right to vote was won in 1912, the Phoenix Civic League tapped into its membership's energy to instigate progressive reforms in state institutions, demanding improved sanitation at meat packing plants, elimination of the trafficking of women in the sex trade, and the protection of immigrant women working in manufacturing. Partch, along with Pauline O'Neill and Frances Willards Munds, founded the nonpartisan Woman's Reform League of Arizona, an adjunct of the National Council of Women Voters, to channel the successes of the Phoenix Civic League into a statewide organization.

Partch continued her reform crusade through the Phoenix Civic League, offering a resolution to the state legislature to increase female influence over the children at the industrial school at Fort Grant, a facility for "wayward" children located in the eastern part of the state. Through her persuasive arguments to state women's clubs, Dr. Agnes McKee Wallace, a suffragist from Prescott, became the first female physician at the institution. Partch was appointed by Governor George Hunt as the only female delegate from Arizona to the American Prison Congress meeting in Indianapolis in September of 1913, an organization dedicated to the improvement of conditions in the nation's prisons.

In the aftermath of her numerous accomplishments, it was widely rumored that Partch would run for office in 1914, but her husband's transfer to a position in Albuquerque put an end to the speculation. After a long illness, Virgil Partch died in 1919 and Jennie moved to Los Angeles, California, with her daughter, where the two women taught school. Jennie's life was cut short in late 1920 when she was struck and killed by a municipal railway car. 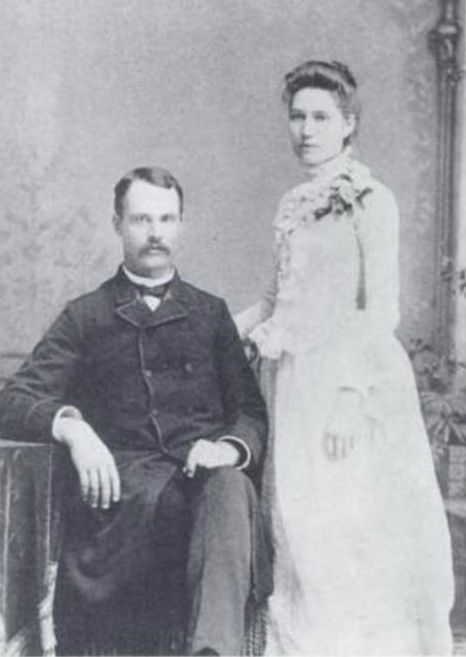 1888 wedding photo of Virgil and Jenny Partch, found on Ancestry.com