Abbie Canfield was born into a devoutly religious family in Jones County, Iowa, where her father Thomas served as a Congregational minister. Little is known about her early life except that it instilled in her a life-long devotion to temperance and provided her with sufficient education to teach school. In 1887 she married Ozro Haskin in Burlington, Iowa. Haskin was a widower sixteen years her senior who brought eight children to the union. The following year the family transplanted to Tucson, Arizona, where Abbie accepted a job teaching in the city schools and Ozro raised cattle on their homestead and prospected. Two daughters were born to the Haskins and, when her father died, Abbie's mother joined the large household.

Despite her family responsibilities, Abbie always made time for reform efforts. She joined the Tucson Woman's Christian Temperance Union and the Macabees, and both she and Orzo were leaders in Arizona's Populist movement. In 1894 Orzo served as a delegate to the People's party (the political arm of the movement), which advocated for voting rights for women. The Haskins became friends with William "Buckey" O'Neill, the territory's most prominent populist leader, and his wife Pauline.

O'Neill and other Populists ushered a bill through the legislature in 1897 giving taxpaying women the vote in municipal elections, but it was overturned in a territorial supreme court decision. When O'Neill was killed fighting with Theodore Roosevelt and the Rough Riders during the Spanish-American War, his widow Pauline continued to work on his progressive causes, eventually heading Arizona's suffrage movement in Arizona and bringing Populists like Abbie Haskin into the organization.

In 1902 Ozro Haskin was killed in a horrific accident while working an old mine. He dug up an old box of blasting powder which exploded when it was exposed to air, blowing him to bits. Abbie took a job teaching school in Tucson to support the younger children (most of Orzo's children from his first marriage were already grown), but financial hardships forced her to declare bankruptcy in 1906. With assistance from her husband's adult sons, she was able to stabilize her finances and eke out an existence on her teacher's salary. Her ordeal was all too common in a territory where the rates of widowhood were extraordinarily high, leaving many women to raise a family on income that was much less than men received.

The argument that women were entitled to equal pay for equal work and that as taxpayers they should have representation in government resonated with Arizona's male voters. In the run-up to statehood from 1909 to 1912, the suffrage movement took advantage of voter sympathy to the plight of widows like Abbie Haskin, arguing that women needed the vote to care for their families. Abbie became a fixture in the movement at this point, hosting meetings in her home in Tucson which featured talks by NAWSA organizers like Laura Gregg Cannon. She became a member of the central committee of the Arizona Equal Suffrage Association in 1911 and a founder of the first suffrage club in Pima County in 1912. Her articles on suffrage were published in the state's newspapers, allowing her to meticulously outline the accomplishments of other states where women had received the ballot, including equal pay laws and property laws, increased educational opportunities, juvenile courts, and providing for disadvantaged children. Haskin argued that with the vote, women "might begin by municipal housecleaning in Tucson."

Although the Equal Suffrage Club of Pima County had only five members--Dr. Rosa Boido, Josephine Brawley Hughes, Ruth May Nowell, Dr. Clara M. Schell, and Haskin, who served as vice president--they collected in a few weeks all the signatures needed from Pima County to place a suffrage initiative on the 1912 ballot and then, as historian James McClintock put it, the Tucson club "succeeded in developing and crystallizing the suffrage sentiment that finally led to success at the polls" that fall. McClintock described Haskin as a "lady of broad general culture" who convinced "the more progressive element of the male population" of the "cleansing influence that woman's vote would have upon the political situation." In a statewide referendum in November 1912, Arizona's male voters approved women's suffrage.

Haskin's work dropped off precipitously after she was diagnosed with severe dementia several years after the suffrage victory and was committed to the Arizona State Hospital for the Insane. While incarcerated she died of a paralytic stroke in 1920. 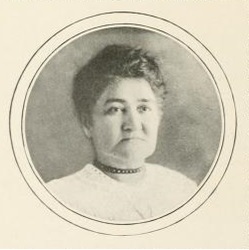