Inez Louise Hamblin was born April 4, 1871, in Kanab, Kane County, Utah, to Jacob Vernon Hamlin Sr. and his fifth wife, Swiss-born Louisa Bonelli. Her parents were members of the Church of Jesus Christ of Latter-day Saints and her father was known as the "Mormon Leatherstocking" (frontiersman) and for his peacemaking skills with the Native Americans. At age eight, Inez was baptized into the church on June 4, 1879.

On October 8, 1888, seventeen-year-old Inez became the second wife of Elder John David Lee (1851-1922) in a ceremony in St. George, Washington County, Utah. From 1889-1913, they had a large family of 10 children, five boys (David, Anton, Otto, Ernest and Rex) and five girls (Inez Edna, Louise, Lela, Bernice and Jessie Mae) whom they raised along with the three children from the first marriage. In Who's Who in Arizona, it is stated that Inez believed "most thoroughly in Equal Rights to all, a theory which has been fully exemplified in her home life."

Living in Luna, New Mexico, from 1889-1900, they prospered by raising horses and cattle and establishing a sawmill. Wanting their children to have access to education, the family moved to Thatcher, Graham County, Arizona in October, 1900, so the children could attend the church-chartered St. Joseph Stake Academy which had opened in Central, Arizona, in 1890, but relocated to Thatcher in 1891. The school later evolved into Gila Junior College. The 1929 yearbook shows Inez on the faculty as the college librarian and that is listed as her occupation in the 1930 census.

Evidence of Inez's interest in suffrage is noted in the December 17, 1911 issue of the Tucson Citizen. Inez is listed as a representative from Thatcher on the Arizona Equal Suffrage League Central Committee. In the March 1, 1912 issue of the Graham Guardian, she is again named as a member of the Arizona Equal Suffrage League Central Committee and presents newspaper readers twelve reasons why women from all states wanted the right to vote. Her organizational position is again confirmed in an August 30th article in the Arizona Daily Star. In November 1912, Arizona women garnered the right to vote. The women in Graham decided to host a celebration of the passage of suffrage in the state on January 23, 1913. Inez is listed as a member of the Finance Committee for this event in local newspaper coverage.

By June 1913, Inez is identified as the President of the Thatcher Civic League and an "ardent suffragist" in the Arizona Daily Star birth announcement of her last child, Jessie Mae. The notice also mentions she is showing "zeal for the cause" by recruiting new members, probably to work for the national cause.

Inez wrote a letter to the editor of the Graham Guardian on February 13, 1917, responding to a circular distributed by anti-suffragists who posited that women always voted the same as their husbands. Inez argued that voting statistics in the county did not support this position especially on amendments that affected the "moral welfare."

Even after women received the right to vote nationally in 1920, Inez continued to speak on the topic. At an event in 1921 honoring John F. Weber, the editor of the Graham Guardian newspaper during the previous thirteen years, she spoke about her appreciation for the newspaper's support for the movement from its beginning to the ratification of the 19th amendment. One ongoing feature was "The Roll of Honor" which showed what states had ratified the National Women's Suffrage Amendment on what dates in 1919 and 1920. 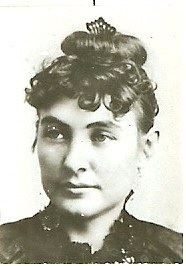 Andrews, Henry Franklin. (1902). The Hamlin family: A genealogy of James Hamlin of Barnstable, Massachusetts, eldest son of James Hamlin, the immigrant, who came from London, England, and settled in Barnstable, 1639, pp. 929-930.

Udall, Louise Lee. A Remembrance Book by her Children. Found online at http://johnterahsmiley.com/Reunion19/Louise%20Lee%20Udall%20remembrance.pdf.