By Janolyn Lo Vecchio, independent historian and past president of Arizona Business and Professional Women

A passionate advocate for women's rights and animal rights, Dr. Clara Schell was also a pioneer optometrist. Clara Kaub was born in Chicago, Illinois on June 27, 1872. Her parents were Charles and Catherine Kaub. On February 20, 1891, Clara married Henry A. Schell in Kenosha, Wisconsin. In 1898, the Schells moved to Morenci, a small mining town in the Arizona Territory to improve Henry's asthma. Henry initially worked as an optometrist at the Detroit Copper Mining Company but quickly expanded his practice by traveling throughout southern Arizona and Sonora, Mexico to provide optometric care to patients. He also became active in medical organizations and state politics as a charter member of the American Association of Opticians and a delegate to the Territorial Democratic Convention in Phoenix. In addition, he expanded his optometry practice to encompass southern Arizona and Sonora, Mexico. In 1900, the Schells moved to Tucson, Arizona to provide a more central base for Henry's optometry practice.

While Henry was busy with his community and professional activities, Clara was admitted to the Northern Illinois College of Opthalmology and Optometry in Chicago. When she graduated in 1902, she became the first woman optometrist in Arizona as well as one of the first women optometrists nationally.

At age 30, Clara became a partner in Henry's optometry practice, which was located on Stone Avenue in downtown Tucson. By 1924, the firm of Schell and Schell was "Arizona's oldest exclusive optical house with the first lens grinding plant in the state." During these years, the Schells traveled together to visit patients and friends in southern Arizona and Mexico.

In March 1907 Governor Joseph Kibbey appointed Henry Schell to the newly established Territorial Board of Optometry. After his election as board president, Henry worked with the other board members to establish state license examinations and standardize the practice of optometry in Arizona and also issued Licenses No. 1 and 2 to himself and Clara on April 13, 1907. When the Arizona Association of Optometrists organized in 1921, Clara and her husband became charter members.

In addition to her busy optometry practice, Clara was a well-known Tucson community leader and activist for women's rights. She was the commander of the Old Pueblo Hive, Women's Benefit Association of the Maccabees, and worked with Dr. Rosa Goodrich Boido, Josephine Brawley Hughes, Abbie Haskin, and Ruth May Nowell to establish the Equal Suffrage Club of Pima County, which worked with the Arizona Equal Suffrage Association to organize mass meetings in Tucson for passage of the suffrage initiative on the November ballot in 1912.

On March 6, 1912, Clara spoke at a mass meeting sponsored by the Pima County suffrage club at the Clifton Theater in Tucson along with Dr. Rosa Goodrich Boido, Selim Franklin, Rena Matthews, and Adele Fields. An outspoken woman, Clara vehemently declared:

"I have been asked to tell why I believe in Equal Suffrage. I know of no good reason why any fair minded person should not believe in it. Any intelligent person, regardless of sex, should have a voice in the making and maintenance of state laws under which he or she must live...You and I, my dear woman, have home, school, and property interests. We have the best interests of the community and our fellow man at heart. Hoodlums -- the worst type of men are allowed to vote. You, my dear fellow woman, you and I have not. Is it right? Would you neglect your husband, children, and home for politics? No, not any more than your husband, brother, or son would jeopardize his business interests because he is interested in politics and has a voice in the making and maintenance of the laws and affairs. I believe when women have the franchise, qualifications will be necessary for those seeking office other than being just a good fellow. Let us prepare ourselves for the proper use of the franchise which will surely be ours soon. Let us use it for the best interest of our fellow women, to the betterment of our homes, and to the purification of our politics."

On election day in November 1912, Clara and her 4-year-old son William manned a suffrage table sponsored by the Pima County suffrage club in Precinct 4. The suffrage table, which was located outside the voting polls, contained buttons, badges, and literature in addition to "chairs for the weary" and water.

After Arizona voters approved the suffrage initiative in November 1912, Clara was one of the first women to register to vote. Her passion for women's rights continued unabated, and in March 1917, she became a charter member of the Tucson Business Women's Club which quickly raised $1,000 and founded the Tucson YWCA. When the Arizona Federation of Business and Professional Women's Club was organized in 1921, the Tucson Business Women's Clubs was one of the six charter clubs in the new state organization which was affiliated with the National Federation of Business and Professional Women's Clubs (BPW/USA). The goals of these organizations were to promote full participation, equity, and economic self-sufficiency for working women. Another focus for both organizations was addressing legislative issues affecting women such as the right to serve on juries, pay equity, and the Equal Rights Amendment.

From 1922-24, Clara served as president of the Tucson Business and Professional Women's Club which had over 170 members. In addition to women's rights, Clara also worked for animal rights. After helping to re-organize the Arizona Humane Society in Tucson in 1905, she served as the organization's secretary until 1922. During these years, she organized Humane Society chapters in Clifton, Globe, Bisbee, and Nogales. Clara also wrote numerous articles in magazines and newspapers about animal rights and organized an annual Be Kind to Animal Week in Arizona.

Although Clara and Henry adopted two children, their marriage failed and they divorced by 1929. Clara continued working in Tucson as an optometrist briefly in partnership with her son and then in solo practice. She also served as president of the Arizona Association of Optometrists from 1926-1927.

At age 76, she retired from practicing optometry in 1946 and was awarded a life membership by the Arizona State Association of Optometrists two years later in recognition of her contributions to Arizona optometry. Clara was also awarded a lifetime membership by the National Humane Society in recognition of her work for animal rights. She died in Tucson at age 83 on April 24, 1955. In 2017 she was inducted into the Arizona Women's Hall of Fame. 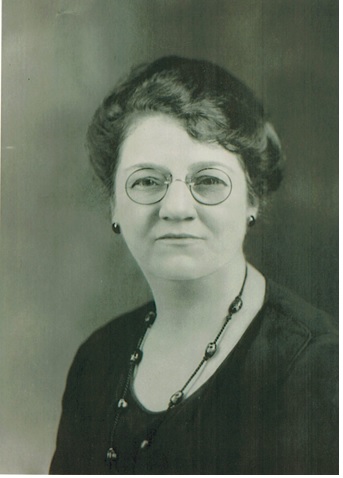 From the personal collection of Aileen Schell McCurnin.