May Belle Craig was born in San Francisco in 1875 to Martha Jane "Jennie" Burns. It is unclear who her father was, but when Thomas Halleck married Jennie Burns in Mohave County, Arizona Territory, in 1877, May Belle was raised as his daughter in one of the most desolate and isolated regions of the nation.

During the 1870s the United States Army was still engaged in skirmishes with indigenous people who controlled considerable sections of Arizona. The territory's primary industry was provisioning the military forts, but a few miners braved difficult conditions to establish mining camps. Because there were no railroads and it was so expensive to transport goods over the rough terrain, the Colorado River was the primary transportation corridor. Steamships from California came up the Gulf of California and docked at Fort Yuma, then all supplies and people were transported to flat bottom boats and taken up the murky Colorado.

The Halleck family operated a small store, a saloon, and the post office at Aubrey Landing, a village that popped up along the riverbank about 220 miles north of Yuma. When steamships docked there, goods were unloaded onto mule trains and taken inland to the forts as well as Planet and Signal, nearby mining camps. Aubrey Landing could only boast 11 residents in 1880 (four of them belonging to the Halleck family) and there were only 590 non-native* residents in all of Mohave County, a county larger than the state of Maryland.

*This number excludes Native Americans, but includes people from Asia or Mexico as well as Euro-Americans.

In the summer, temperatures routinely hovered between 115 and 120 degrees. There were few schools, churches, or social activities beyond drinking in the saloon, and most locals were tough characters--miners, freighters, or soldiers passing through. When May Belle was five, her father shot and killed an inebriated customer who assaulted him at his saloon. Few Anglo women ventured into the territory with their children, preferring to stay in San Francisco. Martha Summerhayes, the wife of a military officer on detached service at Ehrenberg, a port just south of Aubrey Landing, wrote about her experiences living along the Colorado River during the same time the Hallecks lived there. The heat, the violent sandstorms, and the unavailability of fresh food or medical help for her infant son left Summerhayes exhausted and a shadow of her former self. She concluded "it was no fit place for a woman."

Evidently Jennie Halleck was made of stern stuff and raised her family in those primitive conditions. At first there were no other children for miles, except hers and those belonging to the local Mohave tribe. Two more daughters were born to the Hallecks, so May Belle had someone to play with besides tarantulas and Gila monsters. Her mother taught part-time at the school in Signal, while her father raised cattle, prospected, and wrote frequently for the local newspapers. Halleck became active in the Democratic party and represented Mohave County in the territorial legislature from 1888-1890. He was serving as a territorial prison commissioner in Yuma when he died suddenly. May Belle was just fourteen and her mother was expecting her fourth child.

Jennie Halleck kept her four daughters in Mohave County, but struggled to provide for them on her teacher's salary. When they were old enough, she sent them to San Francisco where her parents lived so they could be educated at Catholic convents that offered more advanced instruction than was available in rural Arizona. After graduation, May Belle returned to Mohave County to teach school and help provide for her mother. At age 21, she married widower Lew Blakely of Kingman and together they raised Blakely's daughter from his first marriage and May Belle's youngest sister. They moved to Chloride, Arizona, where May Belle and her husband owned and operated a newspaper, The Arizona Arrow, and a mine.

After her husband's death in 1905, May Belle then moved to Phoenix for better job opportunities than could be found for a woman in Mohave County. After working briefly as an enrolling and engrossing clerk at the Arizona Territorial Legislature she found a position as a dormitory matron and preceptress at Tempe Normal School (Arizona State University) for four years. By then she was in her thirties and had lost her father and her husband. Both she and her mother knew first-hand how difficult it was to survive on the paltry wages paid women, awakening in her a passionate dedication to women's rights and the advancement of women in business and society. She worked hard for Arizona women to achieve suffrage and served with Sally Jacobs as the Arizona Equal Suffrage Association's press secretary in 1912. In this capacity she was responsible for writing and circulating press releases and articles about women's suffrage to newspapers throughout Arizona.

In 1913 she married R. Burton Craig, a man ten years her junior, but divorced him when he chose to quit working, demanding that she support him. May Belle Craig then launched a forty-six-year career in government. She found employment at numerous agencies, including the state Treasury, the Land office, and Fish and Game where, when the warden was out of state, she presided as the first female Game Warden in Arizona. For many years she also served as a clerk at the legislature--a part-time position--and in 1933 was appointed as the first female secretary to the Arizona Senate, a post she held until she retired in 1954.

Like her father, May Belle Craig loved politics. She was elected a member of the Democratic State Executive Committee in 1916 and an Arizona presidential elector in 1920. In 1930 she ran unsuccessfully for Arizona state auditor. But she put her political skills to best use as president of the Phoenix Business and Professional Women's club. She worked with C. Louise Boehringer to organize the Arizona Federation of Business and Professional Women (BPW/AZ) in 1921 which became Arizona's first professional organization for working women. The goals of BPW/AZ were to provide equality, full participation, equity, and economic self-sufficiency for working women. In 1922 May Belle was elected BPW/AZ's second state president.

After widowhood and divorce, as well as participation in the state suffrage campaign which emphasized that women in Arizona were often forced into the workplace by circumstance and needed protection for their rights, May Belle Craig knew first-hand just how important BPW/AZ's mission was. She worked with other members for passage of the Equal Rights Amendment by Congress as well as passage of the Arizona women's jury bill by the Arizona State Legislature. In 1936, she stated in a newspaper interview, "Failure to enact a law permitting women to serve on juries is just a part of the discrimination against women. If we are going to have equal rights, let us have them in all things. It is a blot on the equal rights setup in Arizona that the state doesn't permit women to do jury duty."

In her spare time she learned to fly and became a charter member of the Women's Aeronautics Association. A stenographer and clerical worker her entire career, she proved that she had a creative side as well, winning third place in a national poetry contest for her poem "Questing" in 1949 and joining the Phoenix branch of American Penwomen. After retiring in 1954, May Belle Craig moved to Santa Cruz, California, to live with her niece. She died at age 85 on January 5, 1965 in Los Angeles, California. 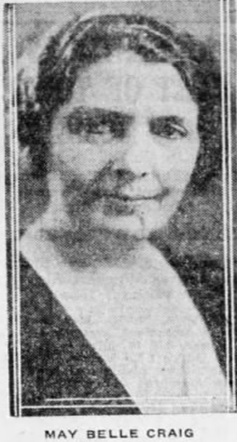 Martha Summerhayes, Vanished Arizona: Recollections of the Army Life of a New England Woman (Lincoln: University of Nebraska Press, 1979, reprint of the 1911 edition).