Mary K. Simons was born 10 April, 1855 in San Jose, California, to Solon Simons and Aurilla Kellogg. She became a teacher in San Jose, married Francis (Frank) A. Gibson, and moved to Los Angeles. One child, son Hugh, lived to adulthood. Guided by a strong mother, he became a foreign diplomat involved with multiple presidential administrations in politics, peace, and providing food and relief for Belgium and France after World War I.

Mrs. Gibson started the first Protestant orphanage in Los Angeles in 1880, known as the Los Angeles Orphan's Home. She remained dedicated to and involved with this institution until her death.

Mrs. Gibson participated in the California Suffrage campaigns in 1896 and 1911. At 5'2", she was a petite woman with a huge presence. Her memorial service program notes that she took "a typical and active part" in the 1911 campaign. Realizing that fundraising was vital to the campaign, Mrs. Gibson convinced the owners of a Los Angeles home garden to allow her to use it for a garden party. She invited "an entirely different group of persons" then the suffrage campaign had been reaching, and gathered new supporters to the cause. In a short time, she raised nearly $10,000.

After being appointed by the governor to serve on the Commission of Immigration and Housing in California, Mrs. Gibson served as the Chair of the Americanization Committee. She pushed for the creation of the first adult education programs in California, as well as the passage of the California Home Teacher Act of 1915, which permitted school districts to provide instruction in the homes of immigrant families to promote school attendance, sanitation, household management, learning English, and "the notion of citizenship...irrespective of sex, creed or party...(so) all persons, rich and poor, in country and city, and of whatever race, will be united toward the upholding of the state and the development of a creative common life."

Prior to her death in Los Angeles, on 11 September, 1930, Mrs. Gibson was honored as a pioneer suffragette" on the Memorial Roll of the League of Women Voters. She was also involved with the American Indian National Defense Association, the Los Angeles County Health and Tuberculosis Association, the Women's Athletic Club, the State Federation of Women's Clubs, the History and Landmarks Club, the Council of International Relations, and the League of Nations Nonpartisan Association. 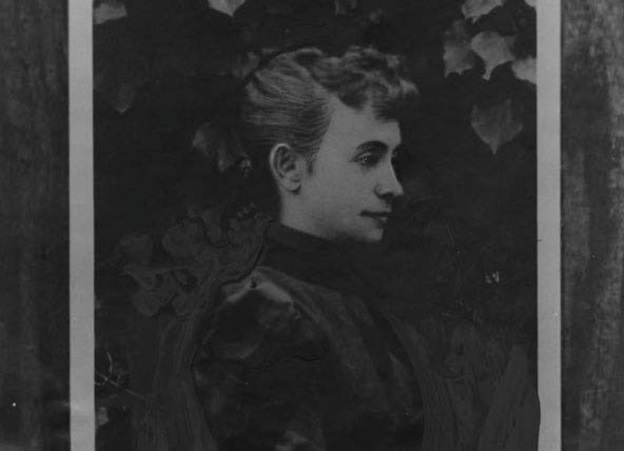 Undated photo of Mary Simons Gibson (1855-1930). Source: Los Angeles Public Library, Herald Examiner Collection, HE Box 1650. Portrait of Mrs. Frank A. Gibson, one of the founders of the Los Angeles Orphans' Home, pictured in the home's early days, when she was Miss Simons.

The Homestead Museum website contains information about the Americanization Committee, as well as reports issues by the Commission of Immigration and Housing of California. https://homesteadmuseum.wpcomstaging.com/2019/06/01/americanization-californias-answer1-june-1920/

The Library of Congress has an informative booklet about Mrs. Gibson. The memorial program presented by The Friday Morning Club includes information from people she volunteered with throughout her life.

Information on Mrs. Gibson's stature and physical features were found in her passport application, available on ancestry.com.

The U.S. census records of 1860 and 1870 provided details on her parents and sibling, as well as her residence growing up. These records can be found on FamilySearch and ancestry.com.

Photo of Mrs. Gibson with the Women's Defense headquarters during World War I: https://www.newspapers.com/clip/21990991/the-los-angeles-times/