Biographical Sketch of Sallie B. Powell

Mary Sara ("Sallie") Bolling Powell was born in Greenville, Alabama on May 28, 1854 to Samuel and Mary Ann (Ewing) Bolling. Her father was a county judge and, later, the probate judge for Butler County. Judge Bolling was politically active, serving as a member to the Succession Convention in 1861 and a Democratic delegate to the Alabama Constitutional Convention in 1875.

Sallie married Marcellus H. Powell, a planter, on April 25, 1876 in Butler County, Alabama. Sallie and Marcellus settled for a time in Lowndes County. The Powells had two children: Frances ("Fannie") and Bolling. Marcellus died on May 16, 1886. Sallie relocated to Montgomery where she resided until her death on November 4, 1934. Both are buried in Oakwood Cemetery in Montgomery, Alabama.

In 1914, Powell stepped down as president of the Montgomery Equal Suffrage Association to assume the role of corresponding secretary. That year, she visited her hometown of Greenville, Alabama to organize a local suffrage association in that community.

Powell continued her active service for the Montgomery Equal Suffrage Association in 1915 as a member of its membership committee. She also conducted a demonstration at the Montgomery Fair in July 1915 which featured a huge pamphlet in book form hung on a brass rod. Each page of the pamphlet presented suffrage information. That same year, Powell worked on an unsuccessful campaign to lobby members of the Alabama state Senate to pass women's suffrage legislation. A bill to present the issue to Alabama voters failed in the state Senate by a vote of 20-12. Alabama did not pass women's suffrage legislation or ratify the federal constitutional amendment prior to adoption of the 19th Amendment. Indeed, Alabama failed to ratify the 19th Amendment until September 8, 1953.

As the suffrage movement transitioned to voter education through the Alabama League for Women Voters, Powell remained actively involved. In 1920, she served on the Woman Citizen Committee of the League which held its convention in Montgomery. Powell was featured as a speaker at the convention luncheon.

In her later years, Powell's grandchildren delighted in the juxtaposition between her ardent suffrage activities and her education at the Southern Female College. Noting that her diploma certified her as having an education which "embrac[ed] all such branches of collegiate courses as belong appropriately to female education," her grandchildren teasingly would urge that certain disputes be referred to Powell on grounds that "she knows everything that a lady ought to know." Her involvement in the suffrage movement expanded the understanding of what "belong[ed] appropriately" to women far beyond what the Southern Female College could have anticipated when it conferred her diploma. 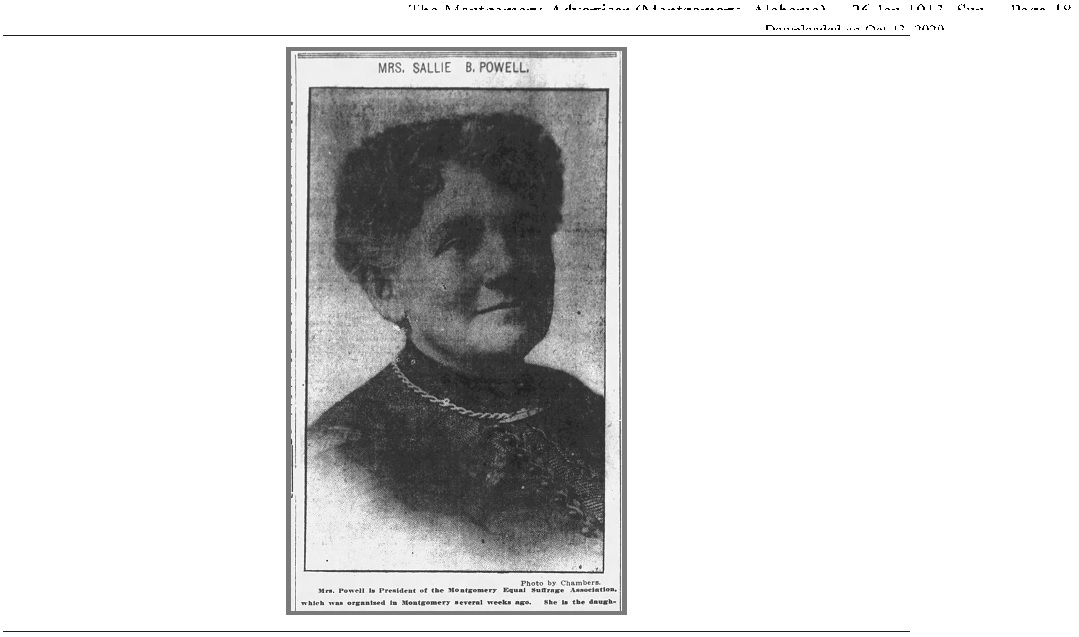 Nancy M. Rohr, "'They Are Too Sweet and Angelic to Reason,' Or, How Women Got the Vote in Alabama" available at https://huntsvillehistorycollection.org/hh/index.php?title=%22They_Are_Too_Sweet_and_Angelic_to_Reason,%22_Or,_How_Women_Got_the_Vote_in_Alabama