Miss Helen Todd, born April 1, 1870, contributed greatly to women's suffrage and labor reforms. After graduating from University of California, Los Angles she worked as a beloved kindergarten teacher. This can be seen to be the start of her interest in child welfare. This interest grew when she went on to become a teacher in Chicago. In 1896, she travelled to Paris with her sister to join family. She stayed abroad for three years. During this time, she studied in Berlin for six months and Sweden for four months. Her studying ignited her passion for social work.

Upon returning to Chicago, she went to work alongside Jane Addams in Hull House. Todd's work at Hull House and passion for social work led to her become an Illinois State Factory Inspector. While in this government role she learned about the poor working conditions many women and children faced. This led to her touring around the United States speaking on what she called "unprotected women," which referred to the young girls who were exploited in factory work. Through this she became attracted to the suffrage movement with her advocating that women's votes would lead to reform, especially reform regarding women and child labor laws. She assisted with the suffrage movement all over America helping referendums pass in Nevada and Washington.

Todd most notably assisted the suffrage movement in California. She became the chairman of the San Francisco center of the Civic League. This involved organizing civic centers in every city and village within the San Francisco area. These centers held meetings and lectures on suffrage and other reform or educational topics. Not only did these centers aid the local communities but were important in raising awareness and support for the suffrage movement. Todd also regularly gave speeches for the suffrage movement all around California. One of the most notable speeches took place on October 9, 1911. The equal suffrage league held an all-day rally outside the Cort Theatre in San Francisco and Todd was the principal speaker for the evening. As in many of her speeches, she related the enfranchisement of women to the improvement of child labor laws. The next day, the referendum passed, and Californian women became enfranchised. However, Todd stayed to help organize women voters. In November 1911, Todd worked with other members of the College Equal Suffrage League to set up weekly luncheons. Each luncheon focused on a different topic regarding the conservation of life and the improvement of conditions for women and children. The first luncheon focused on prison reform with speeches from an ex-convict turned writer, Donald Lowrie and Todd herself, who spoke about her idea of "unprotected women." Her post referendum work in California was not restricted to San Francisco, and she travelled all over the state to deliver lectures. An edition of The Sacramento Bee from March 1912 reported on her notable talks to the Council of Jewish Women and the Sacramento branch of the California Civic League on the role women in government now that they could vote.

Todd's fight for the suffrage movement did not end there; she travelled around the country to aid the movement in other states. She gave speeches in which she used California as an example of the good that can be done with the enfranchisement of women. For example, In New York, February 1915, she gave lectures arguing California was now cleaner and free from rotten politics in order to convince male voters to support the suffrage cause. In 1916 she joined other supporters of the federal suffrage amendment on the Suffrage Special that Alice Paul organized. Later she joined in calling for the release for suffrage supporters arrested for picketing the White House.

Todd never married and after the 19th Amendment passed, Todd continued to engage in activism and social work. She fought alongside Margaret Sanger to legalize the teachings of birth control and was influential in enlisting support to provide low-cost housing in Greenwich Village, where she lived. She engaged in this type of work right up until the end of her life. After a life dedicated to societal betterment, Todd passed away in New York in 1953 at the age of 83. 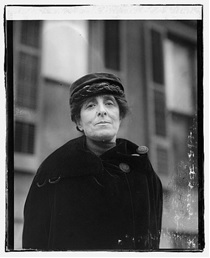