Rose Ankeny was born on February 8, 1865 in Millersburg, Ohio, to Tamar Ellen Lorah and Peter DeWalt Ankeny. She spent her early years in Washington, DC, and in Des Moines, Iowa. In 1887, she graduated from the State University of Iowa at Iowa City, Iowa with both a Bachelor of Arts degree and a Master of Arts degree. Before her marriage, she worked as the city editor of the Des Moines Evening News and later as the editorial and feature writer for the Iowa State Leader, one of the leading democratic papers in the West. She married Thomas Edgar Lewis on February 12, 1889, in Des Moines, and initially, they made their home there. They moved to Chicago, Illinois, in 1893 and to Ankona - now known as Eldred, Florida, in 1901. They had two daughters, after which she gave up her journalism career.

Lewis was very active with the Florida Federation of Women's Clubs, which played an important role in advocating for women's suffrage, serving in various prominent leadership roles at the state and local level for nearly a decade. Her roles included teller, delegate, vice president, and president over the years. According to a 1918 Pensacola Journal article, "Mrs. Lewis represents the women of Florida in an able manner and the state federation has reason to be proud of its chief executive, whose active work and splendid ability have already been felt in what she has accomplished." In addition to being considered accomplished, she was also well liked; an article in the 1918 Ocala Evening Star stated that "Mrs. Lewis is a woman of pleasing personality".

Lewis was confident about suffrage because of the Federation's work during World War I, which assured her that women were capable and therefore should be able to vote. When asked if she were personally in favor of suffrage in a 1918 article in the Pensacola Journal, she laughed, saying "To me, that is such an unnecessary question at this time, when suffrage is almost here, when the times are demanding of women they do the work of men. It is no longer a question of advocating suffrage, we are getting ready for suffrage, that is the main thing. We are endeavoring to educate the women of the country, and through the Florida federation, the women of this state, to the responsibilities which they face." In January 1919, she spearheaded the Pensacola suffragists' "Write a letter to a senator" ten-day campaign to induce Senator Park Trammell to change his vote to affirmative on the Susan B. Anthony Amendment.

By 1920, Lewis was more militantly fighting for the suffrage movement in Florida. In addition to her involvement with the Federation, she was the vice president of the Florida Equal Suffrage Association and served as State Chairman of the Uniform Laws Concerning Women for the National League of Women Voters. The Tampa Tribune called her "one of the most influential club women in the state." She sent an urgent request to every local suffragist to back her in a protest against the delay in passing the amendment to the Federal constitution. "Every Pensacola suffragist is appealed to stand loyally by the cause," Lewis wrote to local workers, "Put the question up to the Florida Senators. Show the imperative necessity of woman's voice in the reconstruction programme. Write a letter today to change the vote of Senator Trammell and to secure us from the active opposition of Senator Fletcher."

Lewis was civically involved in other ways as well, serving as the St. Lucie County Superintendent of schools for four years, as a regent of the local Daughters of the American Revolution chapter. As a field representative of the University of Florida Extension Division, she "took entire charge of the plan of the program" of Florida's Americanization schools.

Lewis passed away at the age of 69 on May 20, 1934, in Hempstead, New York, while visiting one of her daughters. She is buried in Riverview Memorial Park in Fort Pierce, Florida. 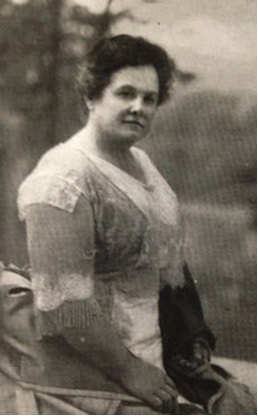 Courtesy of Karla Wright at www.Ankeny.Weebly.com.