"We are preaching democracy for the world and we haven't got it in this country. We must have democracy here before we can convince the peoples of other countries that we really believe in democracy." -Amelia Worthington, 1918

Amelia Worthington Fisk was born in 1890 in Birmingham, Alabama, to Thomas Worthington, Sr. and Josephine Wilkinson. Thomas Worthington was a pioneer and industrialist of ore mining, a prominent planter, and a construction contractor. The Worthingtons were one of the original settlers in Jefferson County, Alabama. The family moved into the first residential suburb known as The Highlands. This was also the location of St. Mary's-on-the-Highlands Episcopal Church which was founded in 1887. Alabama's Episcopalians were highly involved in many social and political reform movements of the early twentieth century. Within this sphere of influence, Amelia Worthington spent her youth being mentored by both family and community members to become an instrumental crusader for women's right to vote in Alabama.

Amelia was an avid piano player and performer from a very young age. She attended the prestigious Pollock-Stephens' Institute of Birmingham (1900-1906) and participated in public performances. Amelia attended Fairmount Seminary in Monteagle, Tennessee (1908-1910) where she honed her literary and oratory skills. In 1909 Worthington was elected as the literary editor for The Sorority Journal​​ for Alpha Kappa Psi, one of the leading sororities in southern schools of the time. Influenced by her time at Fairmount College, young Amelia became involved in several of the societal clubs. Women joined these clubs for self-culture and then later for their interest in the public good. Club women worked for various social reforms and in ever growing numbers became suffragists. A founding member of the Civic Study Club of Birmingham in 1910, Amelia was elected President a year later. This club worked to provide domestic training for young girls. Amelia actively participated in the Nineteenth Century and the Amateur Dramatic Clubs. She began her social reform efforts within the context of these social clubs. Like many other young southern socialites, Amelia eventually used those platforms to disseminate her propaganda for women's suffrage in Alabama, the abolition of the convict lease system, mental health reform, birth control reform, and for the Equal Rights Amendment.

In 1911 at the age of twenty, Amelia Worthington met with prominent Alabama social reformers Pattie Ruffner Jacobs, Ethel Arms, Helen Benners, Mrs. W.L. Murdoch, and Mrs. Jack Brown for their first suffrage meeting. They sought to actively work towards obtaining the voting franchise for women. This nucleus of six women from Birmingham remained steadfast in securing the vote for women until the ratification of the 19th Amendment, even though Alabama would not ratify until 1953. Leading club women of Birmingham, including Amelia, founded the Birmingham Equal Suffrage League (BESA) on November 11, 1911. This co-ed, white-upper class suffrage organization provided Amelia the opportunity to become deeply involved in the suffrage movement. Many southern suffragists did not support universal suffrage at the expense of the African American women.

Amelia held many positions within the BESA including: Editor of the "Woman Suffrage" (a weekly space in The Birmingham News​), Lecture Committee Chair, and Press Committee Chair from 1911 until 1919. She also served as a spokesperson and reporter for the BESA. As Editor of the "Woman Suffrage," Amelia influenced thousands of women to join the cause of suffrage in Alabama through her writings. A Birmingham physician remarked in 1913, "Since my wife read about how some Birmingham women had gotten together to try to get the vote, she ain't happy unless she sees the papers everyday and she makes me drive in after 'em."

Amelia attended the Normal School for teacher training in 1912. The Birmingham News​​ article, "First Suffrage Issue in the South: Amelia Worthington, Pupil in Normal School, has been suspended" revealed Amelia had been suspended for her suffrage work at the Alabama State Fair. The BESA disseminated more than 15,000 pieces of literature at their fair booth on suffrage day. School authorities objected to her outside activities and she was asked to "give up propaganda work for the suffragists." These objections did not deter Worthington from her commitment to the suffrage movement. The following month she attended the National Equal Suffrage Convention in Philadelphia as a delegate from Alabama.

The Chattanooga News​ reported in 1914, "Miss Amelia Worthington delivered an interesting and humorous address on "Answers to the Antis." The audience was kept in an uproar of laughter...greeted with profound applause throughout her address." "Why I Am an Anti-Suffragette" was her most famous comical monologue about a young modern woman deciding whether or not to push for suffrage. Known for her wit, charm, and humorous monologues, Amelia was a featured speaker for many suffrage meetings and conventions.

The Equal Suffrage Associations in Alabama were at the forefront in supporting the war effort in 1917-1918. Amelia served as Chair for both the Birmingham City Committee for the AESA and the Women's Committee of the Alabama Council for National Defence. With the BESA and other service groups, their "war work" included volunteering for the Registration Boards, Red Cross, and First Liberty Loan. Amelia produced more than 3000 inches of newspaper suffrage publicity in Birmingham from July 1, 1917 to the beginning of 1918.

Amelia Worthington held many positions for the Red Cross of Alabama and Massachusetts including the role of Field Secretary from 1917-1924. She discovered through her extensive travels throughout Alabama, "women leaders in the Red Cross work were pronounced suffragists, which refutes the old charge that women by participating in civic and political affairs loses her gentleness and adeptness," also noting "suffrage women were at the head of practically all women's war work organizations". Amelia held the long distance traveling championship of the Red Cross field workers in the Gulf Division in 1919. She reportedly covered 10,868 miles in seven months while changing the Red Cross chapters from war time services to the new peace program of family welfare and nursing services.

By 1920 women gained the right to vote and Amelia helped to transform the AESA into the League of Women Voters. The BESA's "Woman Suffrage" weekly publication in The​ Birmingham News​ became the "Woman Voter" for which Amelia remained as the editor until 1924. After gaining the vote, many of Alabama's suffragists turned their focus to abolish child labor and the convict-lease system. Amelia was instrumental in the establishment of the Alabama Prison Association in the fight to end convict-lease. Through this work Amelia met her husband.

Amelia Worthington married Brenton Kern Fisk, an Oklahoma attorney who later served as an assistant attorney to the United States Attorney General. When asked why she took her husband's last name, Amelia replied, "There are so many vital things that need our time and strength. Why should we spend ourselves to correct an ancient injustice which is not harmful to the body politic, although it is unquestionably unfair to the individuality of one partner in the marriage...As for me, I shall not join in blazing the new trail." The two moved to Washington, D.C. in 1924 where their son, Charles Brenton Fisk, was born. Josephine Fisk (Singer) was born in 1928 after they moved to Boston.

Amelia later attended Radcliffe College where she continued her work for reform. In 1930 she served as the Chair for the Committee on the School of Politics of League of Women Voters. Amelia graduated from Radcliffe College Magna Cum Laude for her Bachelor of Arts in 1932 and then earned a Master of Arts degree in social sciences in 1933. She served as a psychiatric social worker at the Framingham Women's Reformatory and also at Danvers State Hospital. Amelia was active in the Cambridge and Massachusetts League of Women Voters and a life member of the board of trustees for Cambridge Hospital. Birth control and women's health were a priority for Amelia in her reform work.

Josephine Singer said, "Mother had outside interests to which she gave priority. First she worked toward a Ph.D. at Radcliffe, then she was an activist in city politics... But she was also charismatic and delightful toward us during her version of "quality time". She would play songs on the piano for Charlie and me to sing, and sometimes my father would join." Brenton Fisk gave up his law practice in the late 1930s because of early Alzheimer's. According to Singer despite her father's illness, "My mother, with skill and courage, became a social worker and was able to send me to Radcliffe." Mr. Fisk succumbed to Alzheimer's in 1958.

Amelia Worthinginton Fisk also fought for the rights of women and the control over their bodies by serving on Planned Parenthood Councils in Alabama and Massachuettes. Amelia was an avid Equal Rights Amendment supporter as well as numerous other social and civic reform issues. She continued advocating for others until her death at the age of 85 in Rockport, Massachusetts after a long illness.

"Letter from James M. Kilpatrick in Cullman, Alabama, to Mrs. Worthington-Fisk." State Campaign Committee for the Abolishment of the Convict Contract System (Birmingham, Ala.) records, SPR380, Alabama Dept. of Archives and History.

The Birmingham News. ​"First Suffrage Issue in the South: Amelia Worthington, Pupil in Normal School, has been suspended." December 7, 1912:7.

The Birmingham News. ​"Suffragists Give Two One-Act Plays: Miss Amelia Worthington is Star in an Entr'acte Monologue." May 23, 1914: 2.

The Birmingham News. ​"Teachers Have All Rights of Citizens Say Suffragists." December 1, 1912:1-2. 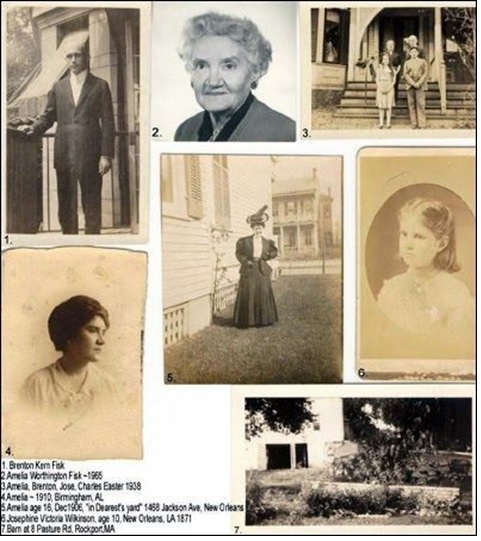