On February 18, 1913, as New York suffragist Rosalie Gardiner Jones [LINK to this sketch] and her "army" of suffrage marchers arrived at an early stop in Delaware on their way to Washington, D.C., they were met by an enthusiastic welcoming committee from Arden, the state's single tax colony. Heading the group was Alice Steinlein, president of the Arden Suffrage Club, which hosted the hikers for lunch. Ardenites were not only devotees of Henry George's ideas about taxation but most were also socialists, advocates of William Morris's Arts and Crafts principles, and believers in the virtues of combining politics and art into an experiment in community-building. Needless to say, they were strong suffragists. Indeed, the Arden Suffrage Club, founded in 1911, held one of Delaware's earliest suffrage parades.

Alice Steinlein's dedication to woman suffrage and to the Arden ideal was shaped by the experience of growing up in a family of reform-minded skilled workers. Born in Troy, New York, in January, 1880, she was the third daughter and third of seven children of New York-born William and Adaline Joslin [or Joslyn] Lightbown. William's parents hailed from England and Ireland, Adaline's from Canada. During Alice's youth, Troy was an industrial city of immigrant workers who produced the wealth that made Troy one of New York State's most prosperous locales. Men of her acquaintance worked in the iron and steel industries; women in shirt manufacturing and the commercial laundry business (Troy was "collar city," famed for producing men's detachable shirt collars), and as servants in the homes of the city's elite. Alice's father William labored in the city's iron works as a machinist; he was a tinkerer who later secured a patent for a metal lubricant. Her brother William Garfield Lightbowne (he added an "e" to the family's surname) became a skilled typographer and printer, committed suffragist, regular socialist candidate for office in New Jersey, robust supporter of craft and industrial unions, defender of workers' rights, and an anti-militarist. Her sister Cora (Potter) was an early advocate of progressive school reform, particularly "cooperative" and "organic" teaching methods.

The Lightbown family left Troy around 1891, relocating to the Washington, D.C., area where the 1900 census found them living in a townhouse at 3328 Prospect St. NW. Twenty-year-old Alice had a position as a government clerk. Soon thereafter, she and Cora moved to New York, where each met and married a man of progressive reformist ideas and a journalistic bent. Cora's husband, Edwin S. Potter, whom she married in 1901, was co-founder of the weekly periodical Pathfinder; he later edited a quarterly journal, Equity, advocating especially for progressive political reforms such as initiative and referendum; he also produced a widely syndicated weekly review of political news. The Potters lived at Upton Sinclair's short-lived communitarian experiment, Helicon Hall, in Englewood, Bergen County, New Jersey, until it was destroyed by fire in 1907. (Sinclair himself was briefly an Arden resident, c. 1910-1911.) Also residing at Helicon Hall at the time of the fire was Dora Steinlein whose brother Frederick had become Alice's husband in 1903. Fred was a New Jersey native who worked as a printer in New York, Atlantic City, and Philadelphia. During their marriage, the couple had two children, Eric Joslyn Steinlein (1904-1987) and Edith Steinlein Berg (1906-1986).

Moving to Arden in 1909 after a short residence in New Jersey, Alice and Fred committed themselves to supporting the fledgling community's political and artistic principles. The family lived in the newly built "Friendly Gables," a substantial house with printing facilities in the basement. As the manager of the Arden Printery, Fred would be helping to develop a distinctive Arden typographical style and to generate income for the community. The move to Arden also reunited Alice with her parents and her younger brother, Chester—all of whom were living in Arden by 1910. (Chester ran as a socialist for the Delaware legislature in 1912.) Soon Cora and Edwin Potter and their children, Lloyd and Amy, were Ardenites too, and Cora had become the town clerk. Her brother William G. Lightbowne (1882-1960) remained in Bergen County. The Lightbowns, Potters, and Steinleins quickly became key figures in building the Arden colony, helping to establish the printing and craft furniture businesses, and creating a community school based on the progressive educational practices pioneered by Marietta Johnson at Fairhope, Alabama, another single-tax experiment where Cora Potter spent some winters.

Suffrage activism was a family and community involvement. Ardenites turned out en masse for suffrage walks and parades, often led by Alice Steinlein. In 1912, the year-old Arden Suffrage Club (or League) selected her as a delegate to the Delaware Equal Suffrage Association's annual convention. Along with her neighbor and friend Margaret Jones Spicer, Alice Steinlein led the Arden group, serving as president and secretary/treasurer, respectively, and arranging the 1913 welcome for Rosalie Gardiner Jones's suffrage "pilgrims." In June of that year, the two women hosted "Suffrage Day at Arden" for the members of the Delaware Equal Suffrage Association. As regular attendees at the group's meetings and participants in its annual conventions, each took a turn serving as an auditor. Both were active in the Arden Players, an acting troupe that performed politically themed productions in Arden and Wilmington. Both walked with the Arden delegation in Delaware's first major suffrage parade on May 2, 1914. Later that summer, Alice was one of a small group of local suffragists, including Florence Bayard Hilles [LINK to Hilles's sketch], representing the Congressional Union, and Martha Churchman Cranston, representing the Delaware Equal Suffrage Association, photographed at a new joint headquarters in downtown Wilmington. The visual comity between the two groups did not last.

Perhaps because of the growth of internal conflicts among the state's suffragists, Alice Steinlein had largely stopped participating in the state organization by 1917. By then, Fred may have been ill with the pulmonary tuberculosis that killed him three years later. In addition, she had begun working at her "distinctive printing" business in downtown Wilmington, Efficiency Press, promising "artistic arrangement and color combinations" in their production. Fred joined her in running Efficiency Press. Their partnership in life and politics was reflected in their 1919 joint statement supporting a minimum wage: "if employers of la[b]or cannot see the justice of paying decent wages then society must step in and regulate wages." Later in 1919, they opened The Greenwood Book Shop in a temporary location in downtown Wilmington at one end of their printing establishment. By 1920 they had found a permanent spot for the bookstore and were living above it. On December 13, 1920, Fred died of tuberculosis at the age of forty-five.

Alice carried on, building The Greenwood Book Shop into a Wilmington institution, particularly after she moved it to a more central location in 1924. Margaret Spicer joined the staff as a specialist in children's books, giving the shop a niche that grew in popularity with customers during the 1920s and 1930s. Perhaps reflecting her experience of bringing up two boys in Arden, Alice took to the book review page of a local newspaper in 1929 to express her views on children's literature, decrying "the absolute standardization of our young people" through narrowly rigid age-specific book clubs. Children should have the joy of discovering reading material for themselves and with parental guidance, she insisted. In the 1940 census, Alice Steinlein and Margaret Spicer listed themselves as co-owners of the bookstore; they also shared living arrangements at 4506 Walton Road in north Wilmington.

Alice Steinlein blossomed in her role as a businesswoman. She joined the Chamber of Commerce and the Wilmington Business and Professional Women's Club, and made the bookstore a meeting space for various white women's organizations, while also giving talks to local women's clubs and alumnae associations. Elected as a vice-president of the American Booksellers' Association in 1930, she was the first woman to serve in that capacity and was regularly re-elected until being chosen as the association's secretary in 1942, a position she held until 1945. She also wrote occasional brief articles for Publishers' Weekly. The politically and racially liberal First Unitarian Church became her spiritual home. She travelled to Europe and the Caribbean and enjoyed a local reputation as "a woman of vast experience and charming personality." She retired from the bookstore in 1945, selling it to a long-time employee, Gertrude Kruse. The following year, Margaret Spicer moved to Baltimore.

A few notes in local newspapers hinted at her continuing interest in women's rights. In 1929, for instance, she was an alternate state delegate to the annual National Woman's Party (NWP) Convention. And in 1940, she posted prominent advertisements for an event at the bookstore featuring feminist author and historian Alma Lutz who would sign her new biography of Elizabeth Cady Stanton. Lutz was in town for an NWP-sponsored event dedicating Pullman railroad cars to Stanton and to Lucretia Mott.

Alice Lightbown Steinlein lived on in her home on Walton Road, near Arden, until moving shortly before her death at a nursing home in Wilmington. She died on February 17, 1965, at the age of 85. A memorial service was held at the First Unitarian Church.

Basic genealogical information on the Lightbown, Steinlein, and Potter families can be gleaned from the vital records, decennial censuses, city directories, travel lists, and other materials found on Ancestry.com and FamilySearch.org. Delaware and New Jersey newspapers digitized via ChroniclingAmerica.loc.gov and newspapers.com, and reports available on HathiTrust.org were invaluable for tracing the Lightbown and Spicer families' far-flung activities, Fred Steinlein's role in Arden, and Alice Steinlein's later involvement in The Greenwood Book Shop.

These newspaper articles chronicle Alice L. Steinlein's work as a suffragist and businesswoman:

"Parents Urged to Continue Selecting Books for Children," Wilmington Every Evening, May 4, 1929, p. 7.

A set of ten photographs of The Greenwood Book Shop from the 1940s can be found at the Hagley Museum and Library, Wilmington, Delaware (accession # 1999. 221).

For context on the history of Arden, see Mark Taylor, "Utopia by Taxation: Frank Stephens and the Single Tax Community of Arden, Delaware," Pennsylvania Magazine of History and Biography 126, no. 2 (April 2002): 305-25; and Eliza Harvey Edwards, "Arden: The Architecture and Planning of a Delaware Utopia" (M.A. Thesis, University of Pennsylvania, 1993)

Photo: Alice L. Steinlein as she appeared in a 1914 photo, a version of which was published in The Suffragist 2, no 32 (August 8, 1914): 8. The photo was taken in June at the joint headquarters of the Delaware Equal Suffrage Association and the Congressional Union. 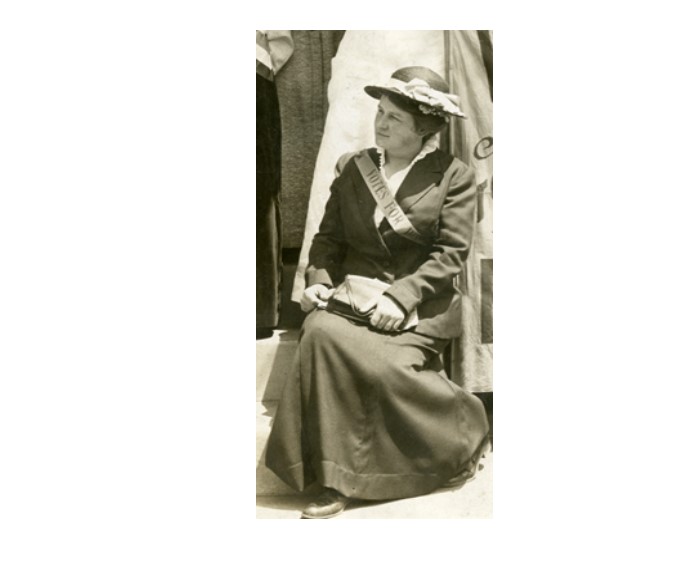