Born in New York City on 2 November 1876 - the nation's centennial year - Sara Augusta Buek would come to describe herself simply as a "typical woman." The fourth of five children born to Charles and Sarah Rafferty Buek, she was fueled by her immigrant parents' appreciation of the right to vote. Her father's German family had immigrated to Boston in 1845 and relocated to Brooklyn by 1856, quickly assimilating along the way. Sara's grandfather, banker Hermann Buek, came to support abolitionism while in Boston, and upon gaining citizenship voted in Brooklyn for Republican presidential nominee John C. Frémont.

Sara's father was a naturalized American, and Republican in heart and spirit too; at age 16 Charles had enlisted with the 41st New York Volunteer Infantry, known as the DeKalb Zouaves, to fight for the Union Army in the Civil War. After marrying in 1866, he next embarked on an architectural career in the post-Civil War building boom of New York City. His firm designed and built upscale Upper East Side residences then expanded into Upper West Side projects. By 1887, the now affluent Buek family began summering in Westport, CT, where growing numbers of artists, writers, publishers, and actors, along with licensed professionals and college-educated women would introduce progressive ideas.

In 1899, Sara Buek married John Crawford, and in 1907 the couple made Westport their year-round residence. Sara thrived, raising her three daughters and being in the public realm. By 1904, women had a civics club of their own and in 1907 a Westport Town Improvement Association (WTIA). Although WTIA founder Mary Coley Staples claimed the organization "had no special interest in woman's suffrage," Buek and other members aligned with the Westport Equal Franchise League (WEFL), established in March 1912. She was a charter member of the WEFL and aided its growth from a handful of twelve in 1912 to an organized body of fifty by 1914. While campaigning for Secretary of State in 1938, Crawford reflected on her suffrage years, stating: "I paraded in those days, and it took a great deal more courage to parade then than it does now." She also ardently supported the WTIA and served as its influential president (1919-24; 1929-31) where she instilled a broader vision and aggressive stance to move the women's club beyond its original mission to beautify the town.

Such forays into civic activism offered Crawford a new-found political voice and platform. With the 19th Amendment now federal law, Crawford registered Republican and cast her ballot for president; this was one of many firsts that this far from ordinary woman achieved. As a suffragist and pioneering legislator, Crawford embraced her role as an archetype to the next generation of Connecticut women. Throughout her political career, she spoke on the impact of a woman's vote. She joined the Republican Party and League of Women Voters to help educate new voters on the machinery of government and dynamics of voting. In September 1920, she caucused for Westport's municipal slate. Demonstrating party allegiance and leadership, she was elected president of the Westport Republican Women's Club, serving for eight years and vice chairman of the Republican Town Committee for twelve years. In 1924, the Westport G.O.P nominated Crawford for the Connecticut General Assembly. In that election, Crawford made local history when she won in a Republican landslide as the first female state representative for Westport, a seat she filled for six General Assembly sessions of 1925, 1927, 1931, 1933, 1935 and 1937. The 1925 House included twenty-two women, about one-quarter of the seats; of these, seven represented Fairfield County, historically a pro-suffrage stronghold. Two months into her inaugural Hartford session, Crawford spoke to the Norwalk Republican Women's Association on her impressions as a female legislator. Her words, characteristically honest and insightful, were intended to inspire Norwalk to also send a female representative to the General Assembly:

Entering into and finding one's place in the work of the Legislature is interesting...and the women appreciated their opportunity to the fullest extent...Women are still subject to much criticism and close scrutiny, but the most efficient woman must prove her efficiency while a least efficient man is so often taken on his trust. Select the woman most fitted for the position and make strong case for her. But do not support a woman for her sex alone.

Upon being named the Republican nominee for Connecticut Secretary of State in 1938, Crawford sought to represent "women of all parties who have been interested in the progress of women in public life" and those devoted to "the cause of good government." The lifelong Republican won and entered Connecticut's annals as the first female statewide elected official and first female Secretary of State (1939-41). Moments after being sworn in on January 4, 1939, Crawford made history again as a female Secretary of State to deliver the oath of office to a Connecticut governor (Raymond E. Baldwin-R). In her 1940 re-election campaign, Chase Going Woodhouse (D) wrote to Crawford - her friend and political opponent who won the election - to express only admiration: "Having worked toward the goal of women's participation in our economic and political life, I have always had deep gratitude to women like you who pioneer and open new roads for the rest of us."

Among those following in her footsteps was her daughter, Sara Crawford Maschal (R), who in 1938 was elected Norwalk's first female state representative and was extolled for being the first daughter to follow a mother to the state house. During the campaign, a reporter described Maschal as "a college graduate schooled in the calm ways of her mother, and like her, able to make as good a speech as any male legislator on the floor." In a 1940 interview, Secretary of State Crawford was asked if Connecticut would ever have a woman governor, to which she assertively replied: "It might happen anytime. You know Connecticut has been very progressive in its attitude towards women in public office." That finally came to fruition in 1975, twenty-six years after Sara Buek Crawford's death, when Ella Grasso (D) became the 83rd Governor of Connecticut.

Crawford's crusading spirit continued into her late years; by May 1945 she was among the prominent supporters of the Connecticut Committee for the Equal Rights Amendment, established in 1943 by Florence Cross Kitchelt of New Haven to offer new language for the amendment and to expand support among congressional members, interest groups, and the public.

She died in Norwalk, Connecticut on August 9, 1949 of a heart ailment. 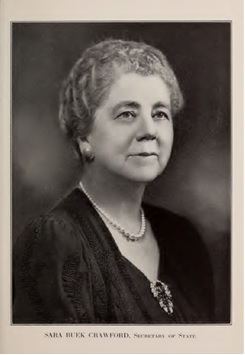 A History of Real Estate, Building and Architecture in New York City During the Last Quarter of a Century (New York, Record and Guide, 1898), 221-22.

Moon, Danelle and Kathryn Kish Sklar, "How Did Florence Kitchelt Bring Together Social Feminists and Equal Rights Feminists to Reconfigure the Campaign for the ERA in the 1940s and 50s?," Alexander Street Press (2010). https://documents.alexanderstreet.com/d/1002968540