Rebecca Buffum was born on June 8, 1811, in Providence, Rhode Island, to politically active Quakers and abolitionists, Arnold Buffum and Rebecca Gould. Arnold was the first president of the New England Antislavery Society and her sister, Elizabeth, became an activist for suffrage and prison reform. Rebecca attended the Quaker-run Smithfield Academy. She taught in a factory school for mill children in Massachusetts, the first of its kind in the area, and at the Philadelphia Colored Infant School, an integrated, coeducational institution.

In 1836, Rebecca married Marcus Spring, a successful wholesale merchant, who invested his wealth to promote many pre-Civil war causes such as suffrage, abolition, and utopian communities. His support for social reform aligned with Rebecca's passion for education and abolition. They had three children and correspondence between them reveals they had an egalitarian relationship.

The Springs founded two utopian communities in New Jersey--the North American Phalanx, which was the most successful communitarian experiment of the period, and the Raritan Bay Union, an idealistic community made up of antislavery liberals, artists, and literary people. Rebecca also established Eagleswood at Raritan, a progressive, coeducational school which hosted several abolitionists, Unitarians, Quakers, and women's rights activists. They also supported a school for slave children, a soup kitchen to aid fugitives and refugees going north after the Emancipation Proclamation, and Eagleswood was a station along the Underground Railroad.

Rebecca Spring attended the women's rights convention held in Worcester, Mass. in 1851 and was remembered in later years as an ardent supporter of woman suffrage. In a 1906 volume, The Mother of Clubs: Caroline M. Seymour Severance, there is a photo of Spring with the California suffrage leader, Caroline Severance, and Susan B. Anthony (see below). She supported woman suffrage for decades, but there is no evidence that she took particularly public or controversial actions to promote the cause.

An ardent abolitionist, Rebecca's most notable undertaking occurred in 1859 when she visited John Brown in prison after he was sentenced to death for the raid on Harpers Ferry. She worked hard for his acquittal and for commuting his sentence, but both were denied. In his final hours, she comforted Brown and promised him that she would have two of his partners buried in free northern soil. She kept her promise and had their bodies disinterred and reburied at Eagleswood. Later, she opened her home to Brown's widow and Eagleswood became a place for Brown's sympathizers and other abolitionists to gather.

Unlike many highly recognized suffragists and abolitionists of the time, Rebecca was never a public face or voice for these causes. Rather, she chose a less radical form of activism and the more common path of women of this period. She walked a line between reformer and conservative, feminist and traditionalist. Under the guise of adhering to a woman's prescribed gender role, she went to Brown to comfort and support him. However, this was both a subversive and political act as she didn't choose just anyone, she chose Brown, a highly controversial political figure.

Rebecca's husband died in 1874. After this, she moved to Los Angeles and became active in many women's clubs where she promoted the arts, literature, and participation in community events. These organizations at the time offered women ways of self-expression and the opportunity be a part of the public sphere, contributing in their way to the promotion of the feminist cause. In 1904 Spring and Caroline Severance served as honorary co-chairs of the state convention of the California Equal Suffrage Association. 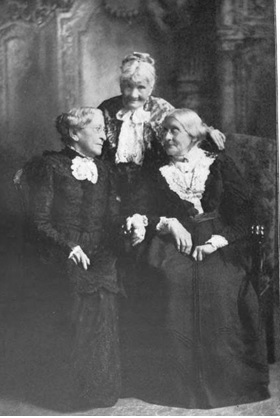