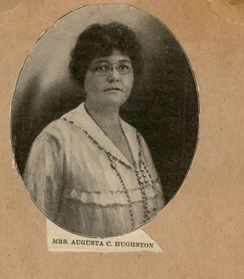 Augusta Crandall was born in New Jersey around 1865. She graduated from Smith College in 1888 and worked as a teacher in Delhi, New York. She married Robert G. Hughston in Kings, New York in 1889, but she had been widowed by the time of the 1920 census.

Augusta Hughston's work included efforts to support education. With the Brattleboro Woman's Club in 1889, Augusta Hughston directed an amateur production of the play Bibi, A Comedy of Toys, the proceeds of which went towards a free kindergarten.

Since she was originally from New York, some of Hughston's early work was with suffragists from the five boroughs: Brooklyn, Manhattan, Queens, Bronx, and Richmond. However, divisions existed among the women from each of these boroughs. At a meeting of the Women's Political Union in 1911, Augusta Hughston was assigned to hand out tickets to the third annual city convention. Hughston was unhappy with how the meeting was proceeding, and left, taking the tickets with her. The women from Brooklyn received word the next day that they would have to travel to New York if they wished to get their tickets. When questioned about her actions, Mrs. Hughston replied "If the Brooklynites want to know why they were treated in such a manner, let them come over and find out for themselves." The women of Brooklyn were indignant and demanded to be treated with the respect and recognition they deserved. Many of them felt that the Brooklynites did the majority of the work for the organization, but that the credit was instead given to the women of Manhattan. As a result, the women threatened to boycott the convention and only a small delegation from Brooklyn was expected to attend.

Hughston's work continued in New York and in 1912, she along with other New York suffragists, held a public meeting in the Chinatown district to encourage the Board of Education to allow Chinese women and children access to public parks and schools.

Hughston was also publically critical of the police response to the 1913 Women's Suffrage Parade in Washington D.C. and voiced her opinion in street corner meetings. According to The Bedford Daily Mail, these "references made to Monday's outrageous treatment of the women by the speakers were received with cheers." She, along with other suffragists, spoke out against the police force's failure to adequately protect the marchers from insults and physical injury.

On behalf of the National American Woman Suffrage Association Hughston traveled around the eastern part of the United States; much of her work is detailed in local newspapers. In 1916, as a field director for the Association, she was sent to Maine to implement a state-wide plan to organize the suffrage efforts. She also gave a number of talks, including at the first suffrage meeting held in Belfast, Maine.

In November of 1916, Augusta Hughston was selected for a month of fieldwork in Vermont with all expenses paid for by NAWSA. During this time, eighteen suffrage clubs were formed and she helped to organize canvassing in cities across the state. In the summer of 1917, she organized women across Indiana and helped form new suffrage leagues, while offering free public speaking classes in the morning.

Hughston in 1917 became an organizer in Michigan and the campaign manager for Detroit. Being back in Michigan was considered a difficult assignment as Wayne County and specifically Detroit constituted a quarter of the state's voting population. The History of Woman Suffrage attributes the passage of the suffrage amendment in Michigan due in part to the "activity of all organizations of women"-- like the work of Augusta Hughston. As she reported, "In Detroit alone there were distributed 500,000 pieces of literature; 50,000 buttons, 13,000 posters put in windows, 1,000 street car advertisements, 174 large billboard posters and 1,766 inches of paid advertisements in newspapers."

In 1919, Augusta Hughston was sent to West Virginia by the National Association. She spent six weeks in the state with fellow national organizers Miss Beveridge and Miss Mary Elizabeth Pidgeon. The National Association paid each a salary for their work organizing the districts in the state and printing literature and petitions. During her time in the state, Hughston held a number of conferences including one at the home of the West Virginia Equal Suffrage Association President, Mrs. Allie Haymond.

In April and May of 1919, Hughston toured the four largest cities in Texas: San Antonio, Dallas, Houston, and Fort Worth. She worked as a campaign manager for the State Equal Suffrage Association organized local campaigns.

Augusta Hughston also worked in Iowa in 1919 to represent the National American Woman Suffrage Association. She was honored by the Political Equality Club in Des Moines in July of 1919 for her help in securing the passage of the Susan B. Anthony suffrage amendment bill in the state.

"Reviving Interest in Suffrage Cause." The West Virginian, 04 February 1919. https://www.newspapers.com/image/464984766/?terms=augusta%2Bhughston