Even though Georgia was one of the states that did not ratify the Susan B. Anthony Amendment in 1920, granting women the right to vote, the state had an active woman suffrage organization beginning in 1890 in Columbus and Atlanta in 1894. Born in 1885, Sally Fanny Gleaton was a young girl living in Conyers, Georgia, at that time, but as an adult she became a faithful worker for the cause in Georgia and in several other states. Beginning in 1917, Sally worked in New York for passage of the 19th Amendment, followed by trips to Connecticut, Massachusetts, and Oklahoma. While in Connecticut, she became good friends with Katharine Hepburn's mother, also named Katharine Hepburn, a noted suffragist.

Georgia suffragists belonged to the Equal Suffrage Party of Georgia, a branch of the National American Woman Suffrage Association. In 1914, this organization sent a letter to the Georgia state legislature along with a copy of the Woman Suffrage Bill, which was to be introduced to the legislature. The letter ended with this message:

"Our earnest plea is that you will pass this bill and give our present voters, the MEN of GEORGIA (all caps), the opportunity to vote upon the subject and settle it for themselves. I am confident that personally you are willing to give our women, who are forced into the business world to earn a support for themselves and children and often a disabled husband, son or brother, an equal chance with men."

However, the federal amendment was still several years in the future.

Some sources place Sally in Atlanta as early as 1915. The state suffragist convention was held in November 1915, and the first suffragist parade was held at that time. Miss Eleanor Raoul, the Atlanta organization's leader, led the parade on horseback while Sally followed in a yellow car that had been sold for unpaid taxes as a protest against taxation without representation. After the parade, she bought the car and was seen driving it around her hometown of Conyers.

In June 1919, Miss Sally Fanny spoke to the members of the Athens Woman's Club about woman suffrage. Miss Sally Fanny was also listed as an assistant for the Central Committee of Women Citizens in 1919, just a few months before the vote in Congress for the 19th Amendment. A news article from 1919 reported that Miss Sally Fanny presided at a meeting in which she stressed the registration of potential women voters at municipal elections. She stated,

"It is the duty of every woman here to see that every other woman registers before the books close. The importance of this goes beyond the boundaries of our city. Georgia is looking on to see how the experiment of municipal suffrage will turn out in Atlanta and much will depend on it. ...The national association has watched with much interest the progress of suffrage in Georgia..."

Clearly, Miss Sally Fanny was passionate about woman suffrage and worked diligently to bring the right to vote to all women.

After the 19th Amendment was passed, Miss Sally Fanny served on the Democratic National Committee to organize women voters in Rockdale County. She also served as a director of the Georgia League of Women Voters.

In 1923, Miss Sally Fanny moved to Hartford, Connecticut, to serve a Field Secretary for the Connecticut League of Women Voters and remained in this position until 1932 when she returned to Georgia. Her name joins those of other suffragists on a bronze plaque honoring their efforts, which is on display in the State Capitol, Hartford, Connecticut.

She didn't slow down then but continued to work in areas of service to the cause. Miss Sally Fanny was a member of the Conyers Civic League, the Conyers chapter of the United Daughters of the Confederacy, and the American Association of University Women. When Miss Sally Fanny died in June 1968, Eleanor Raoul Green, her good friend and fellow suffragist, attended her funeral. Miss Sally Fanny Gleaton is buried in Eastview Cemetery, Conyers, GA.

When we next go to the polls and cast our ballots, let us pause and give thanks for the untiring efforts of so many women leaders and enlightened men who gave women the right to vote. 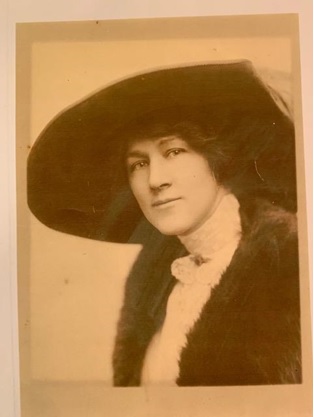 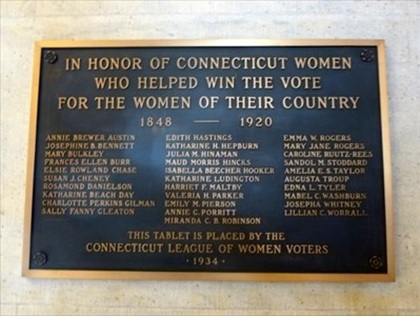