Caroline Maria Gilkey Rogers, fondly called as "Carrie" by her friends, was born on 4 May 1837 at Camden, New York, to Caleb Bates Gilkey and Belinda Pendleton Gilkey. Caroline was a portrait painter married to Elias F. Rogers a widower who ran a large custom laundry with Thomas P. Dowling in partnership, in Troy. It was a second marriage for both Caroline and Elias Rogers, Caroline had earlier married Cyrus I. Clarke in 1860. She lived with Rogers in Lansingburgh, New York at the northeast corner of 3rd Avenue and 106th Street and also briefly lived in the Phoenix Hotel after the mortgage of their house. She often hosted suffrage meetings at her home, including prominent suffragists like Susan B. Anthony, Elizabeth Cady Stanton, Mary Seymour Howell, etc. Her home was nicknamed the "Equal Rights Hotel" because of the warm and generous hospitality of Caroline and her husband. Mrs. Rogers was a good orator and was an active member of the women's suffrage movement in the 19th century. She often participated in debates on women's suffrage and was very critical of the fact that ignorant and illiterate men were making laws for women. Caroline became the Corresponding Secretary of the Political Equality Club of Albany and worked tirelessly for the political freedom of women. She attended and addressed state and national suffrage conventions.

In 1885 Caroline visited the polling place in the fourth election district of Lansingburg and attempted to vote by making Constitutional arguments to the polling inspectors as to why they should accept her vote. Though her name had been previously registered, her vote was refused. Caroline organized campaigns to elect women to the local school board and also visited the Governor on account of a bill relating to permitting both mother and father to vote at school elections. Caroline while addressing the committee meetings often reiterated that ballot is a symbol of equality in the lack of other recognizable symbols of equality in the country and therefore it should be granted to women as well. She often appealed to the sense of justice and fair dealing while demanding suffrage rights from the members of the senate committee. Caroline argued that women demand the franchise precisely on the same principles that men claim for themselves. She often quoted the slogan of the Revolution "No Taxation Without Representation" as a tyranny, which applies to women as well, and was valid even after a hundred years. On another occasion she addressed and debated a Bill for Municipal Suffrage in 1886, which achieved the constitutional majority of 65 votes as yes but two men changed their votes from affirmative to negative, making the yes at 63 which fell short. All through the 1880's and 1890's she travelled to nearby places including Washington along with Elizabeth Cady Stanton generating public opinion and garnering support in favor of Women's Suffrage.

Caroline died on 12 November 1899 in Brooklyn, New York. The Lansingburgh Historical Society and William G Pomeroy Foundation has honored her with a Historical Marker at the site where she had once tried to vote.

www.findgrave.com is a website that allows the public to search and add to the online database of cemetery records. For Caroline Gilkey Rogers, see https://www.findagrave.com/memorial/183627540/caroline-maria-rogers

Details, including the address of the Historic Marker can be accessed online https://www.wgpfoundation.org/historic-markers/suffragist/ 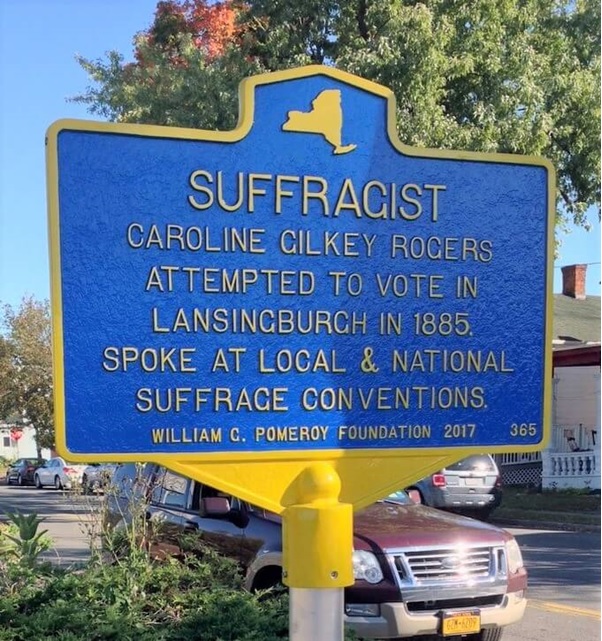