Ida and Champlain Lord Riley (1877-1937), were both active in the Woman Suffrage Movement. Ida Elizabeth Holt was born September 23, 1875 in New York to Robert Steven Holt, a merchant, and Constance Burrill. In 1904, she married Champlain Lord Riley at the age of 28. Initially they lived in Summit, NJ on Beekman Terrace. By 1910 they had moved to Plainfield, NJ and were a prominent couple in the community. Finally in 1930, they had moved to Watchung, NJ where they lived their final years. They had four children: Edward Champlain, Philetus Holt, Constance B., and Robert Steven Holt. Champlain Lord Riley attended Cornell University and studied Mechanical Engineering. By 1913 he was President of the American Society of Heating and Ventilating Engineers and a partner in Clark, MacMullen & Riley, an engineering consulting firm. His mother, Louisa Lord Riley (1836-1917) was active in the suffrage movement beginning in the 1870s.

The Rileys were both active in the community, the First Unitarian Church, and local schools. Ida Holt Riley's first notable community engagement was in March of 1909 when she was elected to the Executive Committee of the Consumers League of New Jersey. Champlain was involved in the local school commission and was instrumental in obtaining Parker Field for the Plainfield public schools. Champlain died in 1937 and Ida followed in 1940.

The first year her suffrage involvement was noted was 1907 when she was a New Jersey delegate at the 39th Annual Convention of the National America Woman Suffrage Association (NAWSA) held in Chicago. She regularly gave speeches to women's groups, including one given in March 1910 at the Woman's Christian Temperance Union meeting where she made a speech on the "Facts and Theories of Suffrage." May 2, 1910 was Suffrage Day across New Jersey. Meetings were held all over the state by different suffrage leagues and suffrage editions of newspapers were published in multiple cities. Champlain Lord Riley was Chairman of the Suffrage Day Program in Plainfield. That day, the local branch of the New Jersey Woman Suffrage Association (NJWSA) took over the editing of the Plainfield Daily Press (PDP). With Mrs. Edward F. Feickert as the editor and Ida H. Riley as one of the Assistant Editors, the suffragists created what they considered to be an ideal newspaper from the woman's point of view. In an article she wrote for the suffragist edition of the PDP, Ida wrote about the Equal Suffrage League (ESL) saying, "It has formed a plan of work which if faithfully carried out will acquaint every soul in the city or borough with the reasons why woman suffrage is the most important next step in the development of democracy – the most important, in fact, that the country has to solve at the present time". In October 1910, at the Equal Suffrage League's meeting held at the YMCA, she introduced guest speaker former mayor William L. Saunders and said, "Last year criticism was made of the league for holding their meetings too privately. It was said that there were many who were interested in equal suffrage, though not committed to it, who felt some embarrassment in attending meetings held in private houses. We have profited by this criticism and are going to hold four evening meetings in the YMCA auditorium during the winter." In November 1910, at the 20th Annual NJWSA Convention in Plainfield, she gave the opening speech as President of the Equal Suffrage League (ESL). In her speech she said, "I bid you all welcome with a great deal of pleasure and with the conviction that there has never been a time when a suffragist convention could meet with so much of hope and added faith." During the convention she was elected Vice President of NJWSA. Her duties as President of the ESL continued throughout 1911.

As President of ESL, she was present at many important suffrage events. In March 1912, she was part of a large delegation that marched on Trenton to witness the suffrage amendment hearing at the State house. In May 1912, she joined a parade of approximately 15,000 women, organized by the Women's Political Union in New York City. As the New Jersey representative on the NAWSA Committee on Education, she gave a report at the October 1912 NAWSA Convention in Kentucky. In her report she highlighted that: Governor Wilson of New Jersey approved of school suffrage for women, the New Jersey Federation of Women's Clubs was also working on school suffrage, and that NJ Senator Frelinguysen recommended that women be appointed to board of education posts. In November 1912 she attended the 22nd NJWSA annual meeting in Trenton as Vice President.

She went to Newark in February of 1913 to meet "General" Rosalie Jones and the suffrage army which was on their "hike" to Washington. The Plainfield ESL accompanied the army as far as Elizabeth. A mass suffrage meeting was held in Newark at Proctor's Theater in March of 1913. Both Rileys attended along with all of the presidents of the various New Jersey suffrage leagues and interested legislators. At the April 1913 ESL meeting, she was again elected its President. In her report at that meeting, she reminded members to read her regular column of suffrage news published weekly in the Plainfield Daily Press (PDP). In August of 1913, she was one of the representatives of the National Congressional Committee who presented petitions to NJ Senator James E. Martine asking for the submission of the Federal Amendment. Senator Martine then unwillingly presented these petitions of several thousand names to the US Senate. She was a charter member of the League of Woman Voters of Plainfield (LWVP), formed in May 1920. By September 1920, due to the work of LWVP, over 3,000 women in Plainfield had registered to vote.

Champlain Lord Riley was also an active supporter of the Woman Suffrage Movement. At the evening session of the November 1910 NJWSA Convention, he was asked to address the attendees on the subject of forming a men's league. In his comments he said, "As the women cannot now vote unless the men give them that privilege it is strictly up to the men to do it, and there was no better way than to begin by forming clubs with the aim in view of helping the cause along." Along with 17 other men in attendance that night, he formed the Men's League for Equal Suffrage (MLES) where they elected William L. Saunders President. At the 1913 Suffrage Dinner in Plainfield, Champlain presided over the program and made the opening remarks along with former mayor William L. Saunders. In January 1914, representing the MLES, Champlain served on the NJWSA Judiciary Committee as Treasurer of the Legislative Sub-committee. The Judiciary Committee was a group made up of members from the four woman suffrage organizations in the state. As a member, he worked on the arrangements for their presentation pushing the suffragist resolution before the Committee on Judiciary of the Assembly in Trenton. He then joined the committee when they traveled to Trenton to listen to the hearing before the State Legislature citing the pros and cons of passing the suffrage amendment. In October 1915, several prominent men including Champlain sent a letter to the editor of the The Daily Home News, refuting NJ Senator James E. Martine's anti-suffrage pamphlet.

"Suffragists Going to Trenton on Wednesday Confident of Victory," The New Brunswick Times, 1/24/1914. 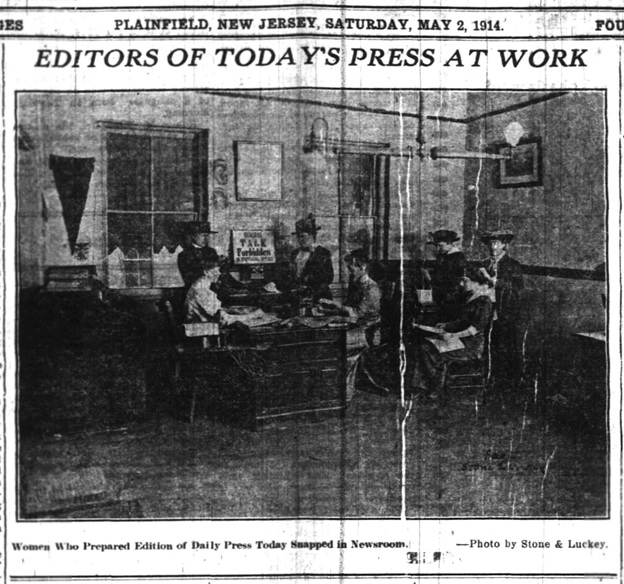 Picture of the suffragist editors on May 2, 1910-- Suffrage Day in New Jersey 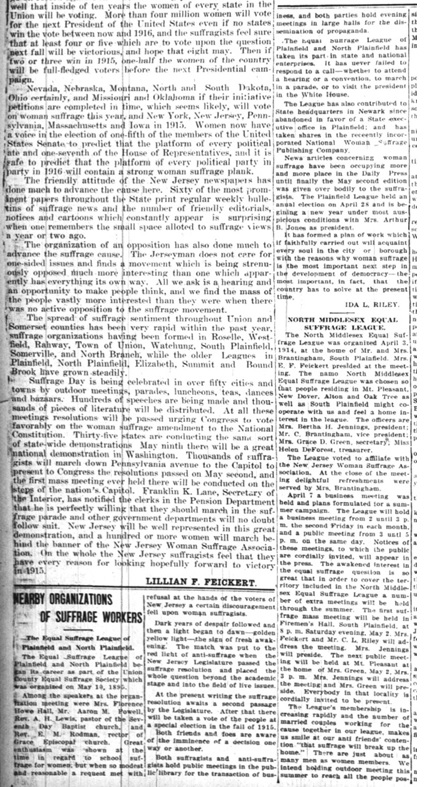 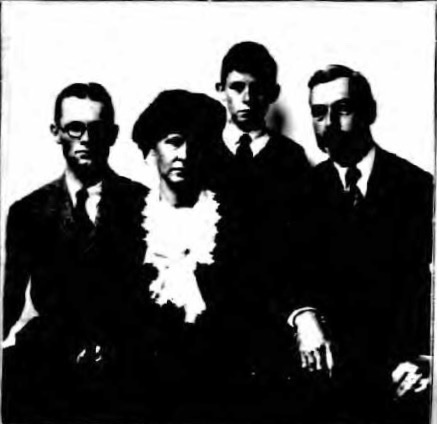