By Maureen Ganey, University of Missouri 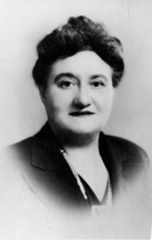 Miss Cecilia Razovsky was born on May 4, 1896 in St. Louis, Missouri. She lived in a basement in a small ghetto in St. Louis with her Jewish parents who immigrated from Russia. Since her family was very poor Cecilia began working at a young age employed in sweatshops and also working as a waitress and shop girl. While she worked, Cecilia never stopped educating herself, eventually taking courses through Washington University in St. Louis and ultimately leading to a career as a social worker.

Cecilia's first job in social work was an attendance officer on the St. Louis Board of Education. During those six years, she taught English and issued work permits to children under new child labor laws. In 1911, Cecilia became chairperson of the Cruden Center, a subsidiary group of the St. Louis Suffrage Organization, in which she helped push for a Constitution amendment regarding suffrage. In addition, in 1912 Cecilia helped found the St. Louis Business Women's Equal Suffrage League where she served on the executive board. Due to her work with the Board of Education, in 1913 the federal government commissioned Cecilia to Washington D.C. to accept an appointment from the U.S. government working in the Child Labor Division of the Children's Bureau. There, she inspected the field, made surveys, and enforced child labor laws. She continued this work until 1918 when the Supreme Court declared federal child labor laws unconstitutional in the case Hammer v. Dagenhart, thus disbanding the Child Labor Division. Following the decision, Cecilia moved on to pursue graduate classes in sociology at University of Chicago.

In 1921, Cecilia returned to her passion for immigrant aid by joining the National Council of Jewish Women (NCJW). This same year, NCJW named her executive secretary of the Department of Immigrant Aid. There she would produce her most significant work. She edited the council's newspaper and wrote a number of books geared toward advising immigrant women including her first and most notable work: What Every Emigrant Should Know.

For the rest of her life, Cecilia worked for justice for all Jewish immigrants around the world. Due to America's harsh immigration laws during World War II, many Jews fled Europe to Latin American countries in hopes of one day going to America. After marrying Dr. Morris Davidson in 1927, the couple spent the remainder of their lives traveling to those countries to aid the Jewish refugees who hoped to eventually live in the U.S. They moved to Texas in 1957 for Cecilia to work as a South American Resettlement Supervisor. Cecilia continued to work in immigration until she retired in San Diego in 1964 and continued to write until her death on September 27, 1968.

Cecilia Razovsky's papers are located at the American Jewish Historical Society Center for Jewish History. Her suffrage and immigration work are documented in the St. Louis Post-Dispatch and the Missouri Historical Review. Her pamphlet What every emigrant should know is freely available in Internet Archive.