Frances Baker Anderson was born on October 22, 1887, in Indianapolis, Indiana, to Herbert Lee Anderson and Elizabeth Baker Anderson. By 1900, the family had moved to Florida, where her father was a lawyer. Frances graduated from Vassar College in Poughkeepsie, New York, in 1908.

Frances and her mother were early suffrage activists in Jacksonville, Florida. In June 1912, her mother hosted a meeting in her home where the Jacksonville Equal Franchise League was organized and Frances Anderson was appointed secretary pro tem. In January 1913, Frances delivered an address on equal suffrage in Ocala, Florida, before the Woman's Club. She said:

"So when we see 25,000 women marching under the banner of Equal Suffrage and thousands of others seeking the franchise everywhere, we realize, as the whole world will soon, that they are not unnatural monsters seeking to undermine society but very normal and very clear sighted women trying to adjust old fashioned laws to new conditions of life."

Then in February 1913, she was corresponding secretary of the Florida Equal Franchise League, which proposed a state constitutional amendment favoring woman suffrage. In part, the proposal read:

"Male and female persons shall in all respects be alike eligible to vote and hold office in the state of Florida."

On June 12, 1917, Frances met her fiancé, Andrew Travers Ewell, in Manhattan, New York, as he returned from Brazil where he was exploring the Amazon River; they married the same day. On the marriage license, she gave her occupation as journalist, and he gave his occupation as explorer. The couple returned to Brazil until May 1918, when they returned to the U.S. By 1920, the couple lived in Brooklyn with their son. However, the couple divorced a few years later and Frances Ewell returned to Florida with her son.

Frances continued to serve in civic positions in Florida. In the 1920s, she was appointed by the Governor to the Duval County Welfare Board. During the 1930s, she was the assistant state director of the Works Progress Administration's women's work and professional projects. In that role, she organized home demonstration projects for black women and Braille classes for the blind. And in the 1940s, she served on the state defense council.

Frances Anderson Ewell died on January 17, 1977, and is buried in Oaklawn Cemetery in Jacksonville.

This photo of Frances is from the 1908 Vassar College yearbook. 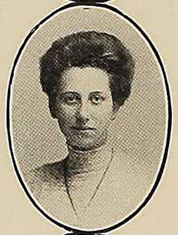 This photo of is from her 1917 passport application. 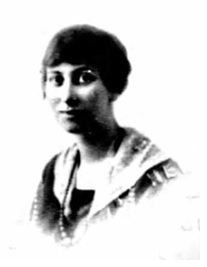 And this photo of Frances appeared in TheTampa Tribune in 1944. 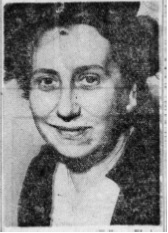