Eleanor "Ella" Collier McWilliams was born in September 1848 in Iowa; she was the oldest child of Samuel McWilliams and Sarah Malinda Jones McWilliams. Her father was a cabinet maker and had been a Union soldier during the Civil War. She attended Oskaloosa College, which was a liberal arts college. Afterward, she taught school in Iowa. Within a couple of years, she married Fielding P. Chamberlain; he was a farmer and an editor, whose first wife had died; they had no children. The couple initially made their home in Kansas.

In 1882, Chamberlain and her husband moved to Tampa, Florida, where her husband invested in real estate and an orange grove. She soon took actions that led to her now being credited as the founder of the suffrage movement in Florida.

Chamberlain attended a suffrage convention in Des Moines, Iowa, and took up the cause in Florida upon her return. She credited her husband with converting her to the cause of woman suffrage. She was asked to write a newspaper column in Tampa on traditional female topics. She is said to have retorted "the world was not suffering for another cake recipe and the children seemed to be getting along better than the women." Instead, she wrote about women's rights. Unfortunately, most of her articles have been lost.

In 1884, Chamberlain was president of the Florida Equal Suffrage Association. Newspapers across the nation summarized her lecture on "The Bible and Equal Right" at a Methodist Church in Limona, Florida, saying,

"The calmness and force of the address and the interesting manner of presenting the facts held the close attention of her audience throughout and were peculiarly convincing to thoughtful minds."

"Mrs. Chamberlain is a delightful reader, and so womanly and modest that her pleasing personality is of itself enough to make one sympathizes with woman suffrage."

"Equal suffrage is the burning question of today. The irrepressible conflict is upon us. The demand of woman for the ballot should be met and answered. Women suffrage is not an experiment, women having had full suffrage in Wyoming 25 years and municipal suffrage in Kansas 5 years....There are those who conscientiously oppose their agitation, and we respectfully ask such to ...sincerely ask themselves if manhood has greater gifts, interests or rights than womanhood."

In 1894, Chamberlain was president of the Equal Suffrage Association in Florida. In 1895, she attended a national meeting of the suffragists and afterward sent a box of oranges to noted suffragist Susan B. Anthony. She also led a state conference that year that was attended by about 100 members. One of her consistent arguments was that "aliens and the Negro" could vote, while women could not. In January 1896, she represented Florida at the 28th Annual Convention of the National American Woman Suffrage Association in Washington, District of Columbia. In 1898, she again attended the national convention, which was held in Missouri; she was hailed as a renowned suffrage leader in the state, as she had recently moved to St. Clair County, Missouri. In the early 1900s, Chamberlain seems to have devoted herself to other causes. However, in 1913, Chamberlain was once again active in the fight for woman suffrage; she served as the second vice president of the Florida Equal Suffrage Association, which had been formed to reinvigorate the movement in Florida.

In the late 1890s, the Chamberlains left Florida for Nebraska, where Fielding Chamberlain died in 1899. Within a year, Ella Chamberlain had moved to Missouri, but in the early 1900s, she moved back to Tampa, Florida, where she became involved in various civic activities. Specifically, from 1909 to 1913, she advocated for the welfare of prisoners. She visited the jails and identified problems, such as men and women being housed in the same facility. Consequently, a women's building and a hospital were added. She earned the nickname of "Prison Mother" as a result. In 1909, Florida's Governor appointed Chamberlain as a delegate to the National Prison Association convention in Seattle, Washington. And in 1913, she and others asked Tampa residents to donate money and food to provide a "good Christmas dinner" for the inmates of the city.

Also, on behalf of Tampa's Child Welfare Society, Chamberlain lobbied the state legislature in 1913 to establish a state industrial training school for "dependent and delinquent" children and provide a pension to widowed mothers for the education and care of their children, rather than build a reformatory school for the children. The pension bill was successful.

Chamberlain was also known as a poet. One of her most well-known poems was referred to as "Cherokee Rose." And in 1923, she wrote a poem called "The Old Salvation Army Bonnet" as a tribute to that organization.

Chamberlain lived in Tampa until her death in 1934. She is buried there in Woodlawn Cemetery. In 2004, she was added to the Florida Women's Hall of Fame.

This drawing of Chamberlain and her husband appeared in the Atlanta Constitution in 1895. 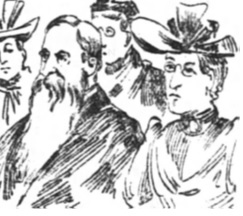